A new format this weekend at Silverstone means FP1 is the only session of the weekend where drivers can fully work on their set-ups ahead of normal qualifying and the standard Parc Ferme regulations that come into play when Q1 starts.

Unsurprisingly, the drivers and teams got out straight away and Lewis Hamilton on the mediums was quickest on the first laps with a 1:30.048, +0.236s ahead of title rival Verstappen; the Dutchman used the hard tyre. Bottas popped into P3, ahead of Gasly and Alonso.

Sergio Perez moved himself up to P3 on the same compound as his teammate at the 10-minute mark. Hamilton, Verstappen, Perez, Ocon, Tsunoda and Bottas was the top 6 at the point.

On their second push laps on the mediums, Lewis Hamilton improved to a 1:29.690, +0.171s quicker than Mercedes teammate Valtteri Bottas.

Red Bull then fitted the mediums and vaulted to the top of the charts. A 1:27.745 from Verstappen put him 0.760s ahead of Perez and over a second clear of Bottas and Hamilton.

During a race simulation on the medium tyre, there was clear blistering on the front right of Lewis Hamilton’s Mercedes.

With just over 20 minutes left in the session, Verstappen switched to the soft tyres and put in a stunning 1:27.035, a whopping 1.1s clear of teammate Sergio Perez and 1.7s clear of Norris on mediums. However, the McLaren driver made an impressive improvement soon after to go P2, 0.7s adrift of the championship leader.

The first yellow flag of the session was caused by Carlos Sainz as the Spaniard spun on the exit of turn 3.

Hamilton and Bottas bolted on the softs in the closing stages but failed to get near Verstappen as they could only manage P3 (+0.780s) and P5 (+0.862s) respectively.

In a mostly quiet session apart from Sainz’s spin, George Russell’s left mirror broke as Lance Stroll complained about having no confidence in the car. He was a second and a half slower than teammate Vettel.

The World Championship leader stayed top by a big margin from Norris. Hamilton, Leclerc, Bottas, Sainz, Vettel, Perez, Ricciardo and Ocon rounded out the top 10 ahead of qualifying. 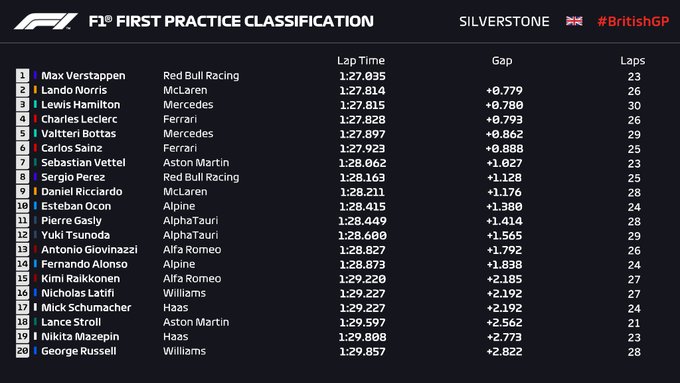