Max Verstappen continued his dominance of this World Championship after making history at Silverstone by taking victory in Formula 1’s maiden Sprint Qualifying and with it securing pole position for tomorrow’s British Grand Prix.

With the results of an exhilarating qualifying session determining the grid for today’s 17 laps Sprint Qualifying race, the 20 drivers would now have to overtake for the best possible grid position for Sunday’s race.

Lewis Hamilton, buoyed by a partisan capacity crowd, managed to put his Mercedes on the pole position slot ahead of championship leader Max Verstappen who was disappointed to miss out on the top spot after a narrow slide into the entry of the Club corner with Valtteri Bottas starting third on the grid ahead of Ferrari’s Charles Leclerc in fourth with Bottas the only driver in the top 10 to start on the soft tyres, as the rest of the top 10 starting on mediums.

Sergio Perez was fifth ahead of Lando Norris rounding off the top six whilst George Russell hoped that he could get Williams one step closer to the points for the first time in over two years with eighth on the grid ahead of Carlos Sainz Jr and less than a tenth behind Daniel Ricciardo in seventh.

At the start, Hamilton got a poor getaway and lost the lead instantly to Verstappen, with Leclerc attacking Bottas on the run- up to the turn 1.

Nikita Mazepin’s Sprint Qualifying was instantly compromised after spinning into Turn 3 after making contact with teammate Mick Schumacher dropping the Russian to last, whilst Sainz and Russell made contact into Brooklands dropping Sainz to 19th.

Hamilton attacked again into Brooklands and Copse using the slipstream from the Red Bull, but the Dutchman defended his position and hung onto the lead as the field came through to complete Lap 1.

Fernando Alonso was the big mover at the start, moving up to fifth from 11th on the grid, as the Spaniard made full use of the quicker soft rubber to hold Norris and Perez for the opening four laps of the race.

Up at the front Verstappen piled on the pressure, setting the fastest lap of the race and building a gap of over a second on Hamilton.

Perez’s race was ruined by a rare mistake as the Mexican spun off at the exit of Becketts, after putting too much power down forcing him into a full 360 and forcing him to make a trip across the gravel, narrowly avoiding the field.

Norris finally got past Alonso on Lap 6 with an easy move into Turn 3, but by the time the Brit got past, the gap to fourth-placed Leclerc was over nine seconds.

Ricciardo followed suit three laps later going around the outside of Alonso into The Loop, to move into sixth place.

Hamilton had no answer for Verstappen’s pace, with the gap being extended to over two seconds as the Brit gave everything he had with blistering tyres, to try and close the gap to Hamilton.

Sainz’s good recovery drive from the tail of the field continued into the latter part of the race,  with the Spaniard producing a superb move into Club corner on Pierre Gasly to move himself up into 11th place and within touching distance of Esteban Ocon’s Alpine with two laps to go.

Perez’s nightmare Sprint Qualifying came to an end after he was told to retire the car on the final lap, meaning he would start last for tomorrow’s race.

However nothing could trouble Verstappen, who led every lap to win the inaugural Sprint Qualifying and with it, a hat trick of pole positions for the Dutchman, as Hamilton managed a distant second ahead of Bottas and Leclerc whilst Norris led home Ricciardo in fifth to make sure row 3 of the starting grid would be an all McLaren affair.

Alonso hung on for an excellent seventh ahead of Sebastian Vettel and George Russell whilst Esteban Ocon completed the top 10 ahead of Sainz and Gasly. 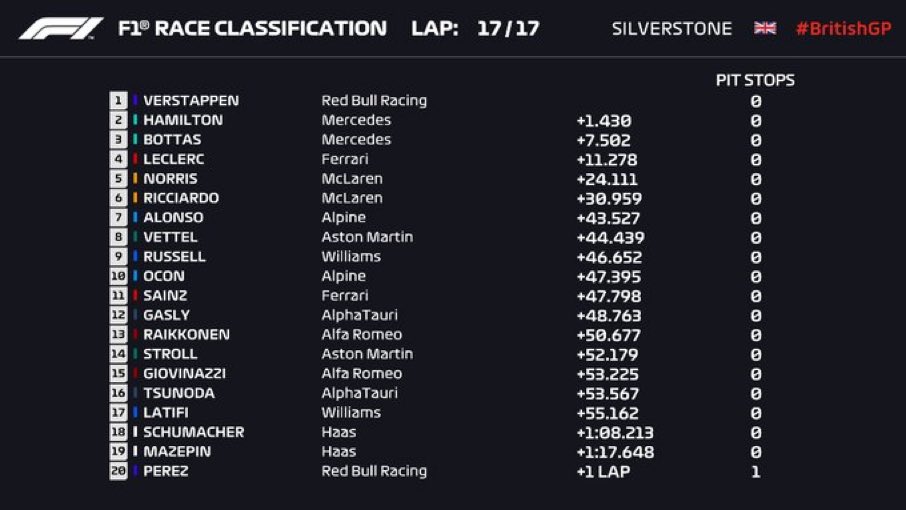 F1 | Abu Dhabi GP | Charles Leclerc on P2 in race and championship: "I think we did a great job today"