Mick Schumacher kicked things off in FP3 with a 1:22.804, a second ahead of teammate Mazepin.

Yuki Tsunoda, who missed almost all of FP2 following a crash in FP1, quickly beat the Haas cars with a 1:20.790 on the mediums. Kimi Raikkonen beat the Japanese youngster thanks to a 1:19.547 as the Finn led the times after 10 minutes.

The first of the big guns to appear was Lewis Hamilton and went fastest on the softs as he logged a 1:18.587, despite multiple oversteer moments during his lap. It put him 0.245s ahead of Sainz.

A 1:17.428 by Valtteri Bottas on his first lap of the session put him 0.082s ahead of Max Verstappen, with Hamilton almost 0.8s adrift in P3. All three drivers used the soft tyre for their best time. Sergio Perez slotted into 4th, less than half a tenth behind Hamilton.

Gasly, Sainz, Leclerc, Latifi, Norris and Ocon completed the top 10 at the halfway point of the session.

On the final runs, Carlos Sainz moved up to P2 initially, just 0.069s behind Bottas. He was also 0.275s ahead of midfield rival Lando Norris who went P4 as Ferrari outpaced McLaren.

The red flags were brought out with 16 mins to go as Mick Schumacher crashed at T11. The German lost the rear of his car and hit the barriers, heavily damaging the left-hand side of the VF-21.

A big hit for Mick Schumacher, he is safely out of the car 👍#HungarianGP 🇭🇺 #F1 pic.twitter.com/Zp5ATOiL0F

Just before the session was stopped, Valtteri Bottas pumped in a 1:17.055 to extend his gap at the top of the charts.

When things got going again, World Champion Lewis Hamilton clocked a 1:16.826 to top the final practice session. He beat title rival Max Verstappen by 0.088s, with Valtteri Bottas in P3, 0.229s behind his teammate.

After a tricky Friday, the Ferraris of Carlos Sainz and Charles Leclerc both finished inside the top-five. Norris, Perez (a second slower than his teammate), Ricciardo, Alonso and Stroll completed the top 10.

Alfa Romeo’s Antonio Giovinazzi had a session to forget as he was only P18. He was also involved in two incidents: he was released dangerously in the pits as Stroll was coming past as the Italian’s front wing touched the Aston Martin. He also badly blocked Gasly in the penultimate corner when the Frenchman was coming at speed. 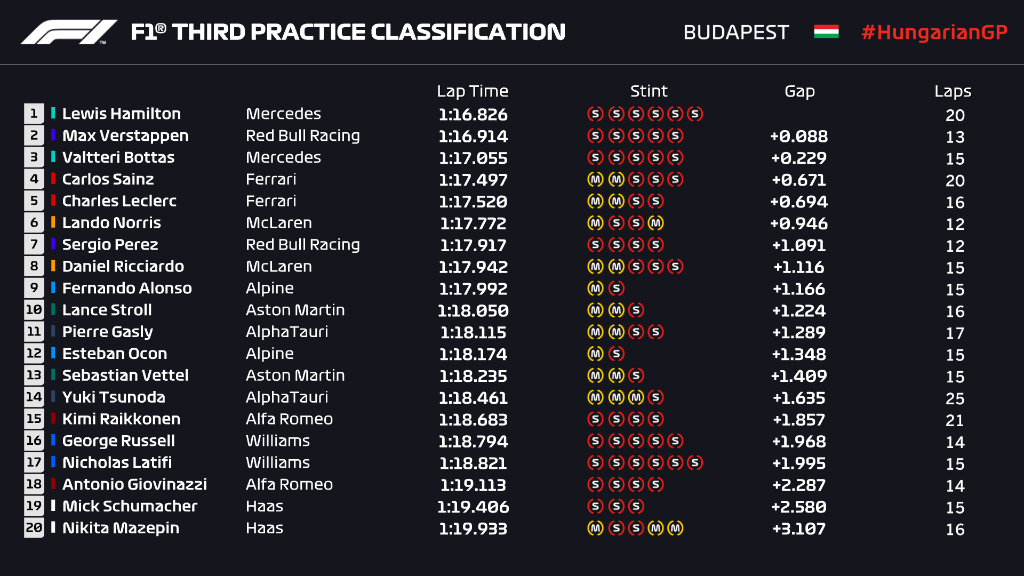