Esteban Ocon wins the craziest race of the season, with Aston Martin’s Sebastian Vettel and Lewis Hamilton to complete the podium. It’s the first victory for the Frenchman in F1 and his second podium in the top championship, who had massive help from his teammate Fernando Alonso in securing it, as he held off Hamilton for a number of laps. The second seasonal podium for Vettel and his new team, almost turned into a win but in the end Ocon got the 25 points.

The race had a wet start, with the drivers beginning on the intermediates, even though Giovinazzi began from the pit lane due to a last-minute tyre switch. Drama ensured in the first lap already, when Bottas, after a bad start, hit at Turn 1 Norris, who clattered into Verstappen. Perez were involved too, with the Mexican driver hit by the Finn as well, while the Stroll crashed into Leclerc, too.

The championship leader suffered a lot of floor damage, as well as Norris, who abandoned the race during the red flag, while Bottas, Perez and Leclerc had to retire. The McLaren driver was forced to interrupt his record-breaking points streak

After the red flag there was a standing start for Hamilton, while all the other drivers boxed and switched to slicks. Pit drama strikes again as Mazepin is forced out of the race after an early release by Alfa Romeo that ended with a crash in the rear of Raikkonen’s and a 10 seconds penalty for the Finn.

It’s definitely not Alfa’s weekend as Giovinazzi got a stop-and-go penalty for speeding in the pit lane and Raikkonen suffered from a slow pit.

Hamilton pitted too after the first lap, leaving Alpine’s Ocon in p1, followed by Vettel and Latifi. The British driver had a technical issue and was stuck for more than ten laps behind Gasly, and was pitted by Mercedes on lap 19 for hards, returning in the top ten and setting himself in p7. Verstappen and Ricciardo immediately followed him

At lap 32 Hamilton overtook Tsunoda’s AlphaTauri to get back into the top five, and at lap 37 Vettel tried the undercut on Ocon by pitting for hards in 3.3. Race leader Ocon followed suit, supported by teammate Fernando Alonso who took p1, with a faster pit in 2.3.

After his pit on lap 40, Alonso signed the fastest race lap, and Hamilton pitted a fourth time four laps later, slotting in after the Spaniard, pulling an even better time and gaining a second a lap on Ocon. Vettel tried to make a pass on the race leader while trying different lines, but it wasn’t successful, and the AlphaTauri boys swapped places with twenty laps to spare.

Hamilton went on to battle with Sainz for the final podium position and completed it shortly after, aided by the better conditions of his tyres, and with only three laps to the end he tried to catch Vettel, but had to be satisfied with p3. Gasly snatched the point for the fastest lap. 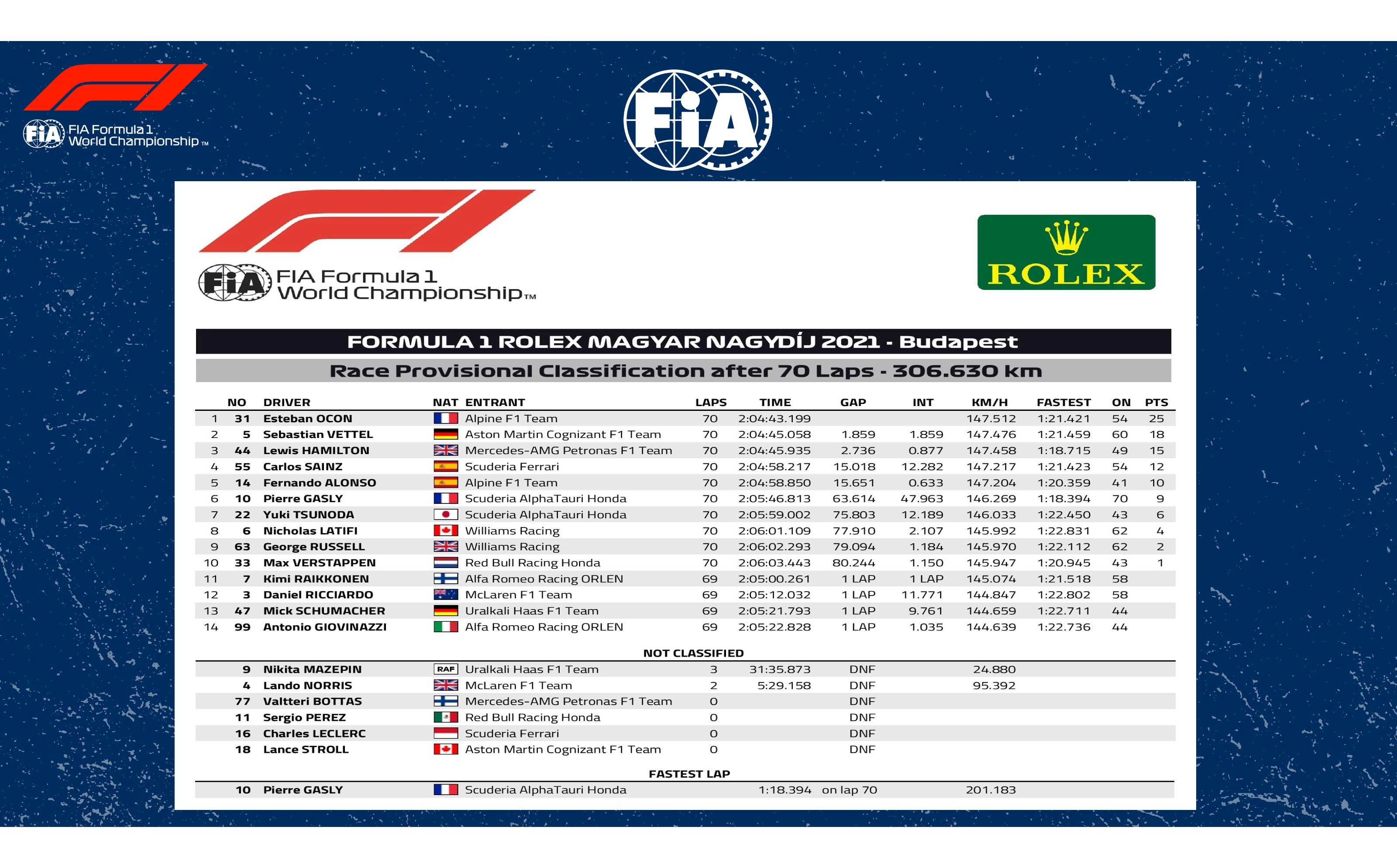 F1 | British GP | Albon on his team's updated package: "There aren't many things on the car that have the same part as two weeks ago"

F1 | Piquet states he had no racist intentions towards Hamilton

F1 | McLaren has stopped developing its car due ...