After some rain between FP1 and FP2, Bottas and Norris went out on inters but immediately reported it was too dry for those tyres.

20 minutes into the session saw Valtteri Bottas on top on a 1:44.513, 0.031s in front of his teammate Lewis Hamilton. Verstappen was 0.6s off, losing all his time in the first sector as the Dutchman's race engineer suggested Mercedes were running a higher engine mode. Verstappen improved on his second attempt to move within a tenth of both Mercedes’.

Gasly, Latifi, Stroll, Ricciardo, Norris and Perez completed the top 10 at that point.

Bottas led Hamilton, Verstappen, Perez, Gasly, Alonso, Norris, Latifi, Stroll and Ricciardo was the order ahead of the qualifying simulations.

Yellow flags were brought out as Esteban Ocon had a major spin as he got on the power out of T13. Luckily for the Frenchman, he avoided the wall and returned to the pits with flat-spotted tyres.

The Alpine driver gets going again and heads back to the pits#BelgianGP 🇧🇪 #F1 pic.twitter.com/ok4ZJtiMvz

Unfortunately for Charles Leclerc, he wasn’t so lucky a few minutes later. As he got on the power on the exit of turn 6, he lost the car heading towards turn 7 and hit the barriers on the left-hand side.

Leclerc goes into the barriers coming out of Turn 6 💥

Alonso [fastest in sector 1], Gasly, Stroll, Ocon, Vettel, Norris and Perez rounded out the top 10 as 0.932s covered them.

Verstappen joined Leclerc in causing a red flag as he lost the rear on entry into turn 7 and hit the wall, breaking his right rear suspension. The session was ended early following that incident.

Max is ok, but his car has been quite badly damaged by the look of things 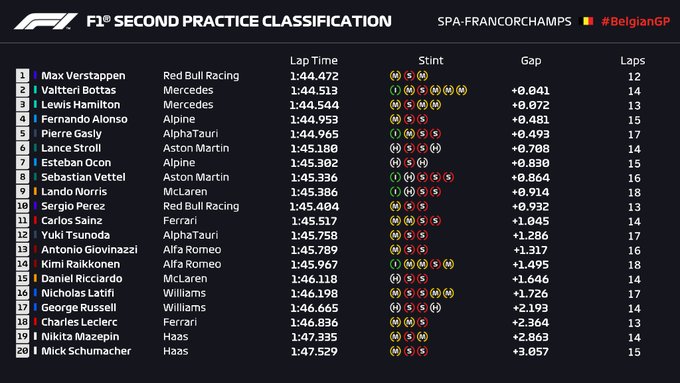