Formula 1 has announced more changes to the 2021 calendar after the cancellation of the Japanese Grand Prix 10 days ago.

The 2021 season was due to hold 23 races, but F1 has had to drop that number by one thanks to the ongoing global pandemic.

The Belgian, Dutch, Italian and Russian rounds remain unchanged. Turkey stays on the calendar, but will move to the original date for the Japanese Grand Prix (08-10 October) and is going to be held two weeks after the Russian Grand Prix. Only one race will be held at Circuit of the Americas in Texas two weeks later, despite rumours of a doubleheader.

Mexico and Brazil form the first two races of F1’s third tripleheader in 2021, with a TBC race to be confirmed in the coming weeks.

The inaugural Saudi Arabian Grand Prix and the traditional curtain-raiser in Abu Dhabi will be a doubleheader and they’ll complete a record-breaking season for Formula 1.

“We are very pleased to announce the updates to the 2021 calendar following extensive discussions with the promoters and national authorities. The pandemic continues to present the season with challenges but we have proven we can adapt and we are confident we can deliver a record-breaking 22 races this year despite a global pandemic.”

“I want to thank the promoters in Brazil, Mexico and Turkey for their patience and flexibility and we will provide the details of the final addition soon. This season is proving to be an incredible battle on the track and this is hugely exciting for our fans around the world and we look forward to the intensity continuing in the races ahead.” 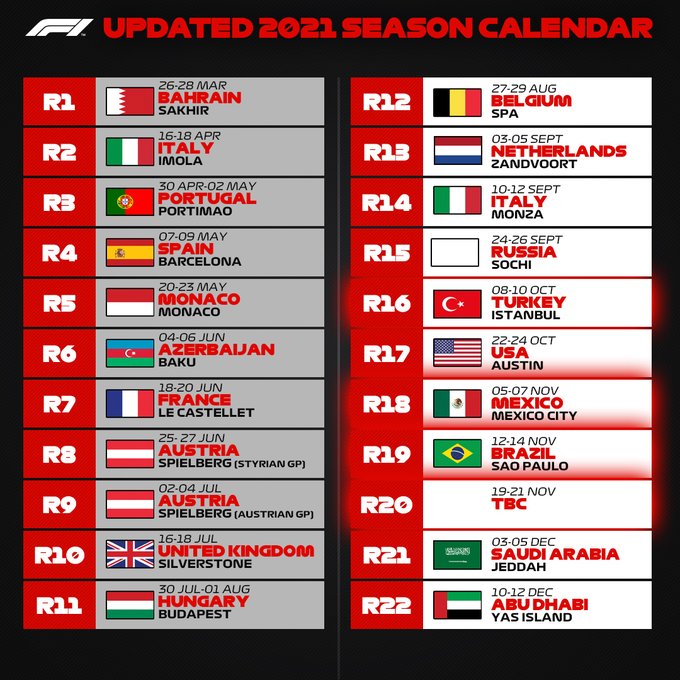