It was confirmed during qualifying that Valtteri Bottas would take a grid penalty and will start at the back of the grid on Sunday thanks to component changes outside of the allotted allowance.

Charles Leclerc posted the opening time of qualifying with a 1:22.801, which was immediately beaten by Sainz by 0.3s in the sister Ferrari.

Mercedes came out and quickly went 1-2. Hamilton did a 1:20.543, 0.261s in front of Bottas. Ricciardo, Gasly and Giovinazzi completed the top 5 after the first laps, with Verstappen only P9.

The World Championship leader was fuming as the Alpine’s were on the racing line heading into the second chicane, as Pierre Gasly was savagely blocked in the Ascari chicane by a Ferrari. Nikita Mazepin also blocked Robert Kubica in Lesmo 1.

Now it's Gasly finding traffic, this time at the Ascari Chicane

Verstappen eventually got another lap on the same set of tyres to move into P3 behind the Mercedes’. Sainz, Leclerc, Ricciardo, Gasly, Giovinazzi, Norris and Perez completed the top 10 before the final runs.

A series of improvements at the end looked set to have knocked the Williams’, the Haas’ and Kubica out, but Yuki Tsunoda had his time deleted at the end of Q1 and he dropped to P17, promoting George Russell to P15 and through to Q2.

On the first runs in Q2, Lewis Hamilton logged a 1:19.936, just under a tenth of a second ahead of teammate Valtteri Bottas. Norris and Ricciardo in the McLarens slotted in behind the Mercedes’.

There was almost contact in the pits as Vettel got released dangerously into the path of Lewis Hamilton.

Tension mounting in the pit lane as the cars exit

Vettel comes out as Hamilton is going past and the two world champs almost touch! #ItalianGP 🇮🇹 #F1 pic.twitter.com/rUNMRKLZ9h

Verstappen moved into P4 on his second run as he safely booked his place in Q3. Gasly and Giovinazzi starred once again as they finished P6 and P7, followed by the Ferraris and Perez.

It was disappointment for Aston Martin and Alpine as their drivers just missed out on Q3, as George Russell was last in the middle segment of qualifying.

Once again it was Lewis Hamilton leading the way on a 1:19.949 on the first runs in Q3, a mere 0.017s in front of Verstappen and less than a tenth ahead of Lando Norris.

Daniel Ricciardo, Bottas [error on the exit on the second chicane], Gasly, Leclerc, Sainz, Perez and Giovinazzi completed the order.

On the final attempts, Valtteri Bottas put in a storming lap in the Mercedes to go fastest in qualifying on Friday. A 1:19.555 from the Finn saw him beat teammate Lewis Hamilton by less than a tenth.

Max Verstappen managed to beat the McLarens of Lando Norris and Daniel Ricciardo to P3. 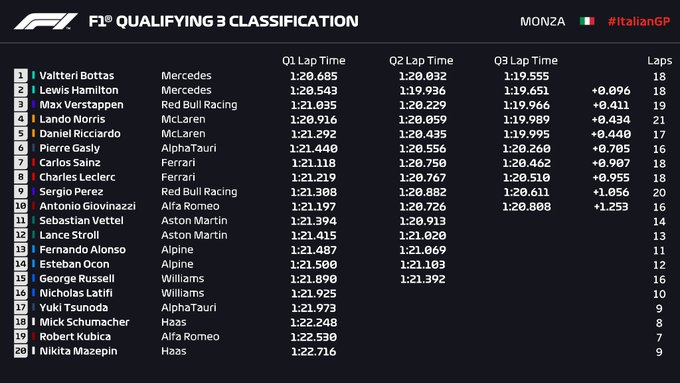