With the final Practice session cancelled due to poor weather, the teams would go into today’s Qualifying session without any wet weather running under their belts, with the ambient temperature at Sochi being a frigid 14 degrees.

Championship leader Max Verstappen and Charles Leclerc would take on their fourth power units for today’s Qualifying session and, as a result, would start on the back row of the grid.

At the green light, all twenty runners went out on the greasy track, with the field picking the intermediate tyres for Q1 as they tiptoed around the circuit, trying to get temperature in their tyres.

First, to get caught out by the tricky track conditions was Antonio Giovinazzi, who spun around at the exit of Turn 16, narrowly avoiding Leclerc in the process.

After several slow laps, Verstappen returned to the garage and ended his qualifying session without setting a time, with the Dutchman preserving his car for tomorrow’s race.

Next to spin was Sergio Perez, who did a complete 360 at Turn 1, bringing out the yellow flag in sector 1, but luckily for the Mexican, he managed to rejoin the track without picking up any damage.

Kimi Raikkonen’s first Qualifying session back after testing positive for Covid-19 ended with elimination in Q1, with Mick Schumacher, Antonio Giovinazzi, Nikita Mazepin and Verstappen also eliminated from the opening segment of Qualifying.

Before Q2, it was announced that Nicholas Latifi would join messers Verstappen and Leclerc at the back of the grid after the Canadian took on a new power unit for tomorrow’s race.

Valtteri Bottas once again found the limits of the tricky conditions, with the Finn having to take avoiding action down at Turn 2.

Leclerc and Latifi elected to end their day’s running with just over two minutes left in Q2, with the Monegasque and the Canadian failing to set a time.

It was a disappointing Qualifying for Alpha Tauri, with Pierre Gasly only managing 12th on the grid ahead of Yuki Tsunoda, whilst Sebastian Vettel also missed out on Q3, as Sainz’s final run was good enough to knock the German out of Qualifying.

The early stages of Q3 was an all Mercedes affair, with Hamilton taking provisional pole by over six tenths ahead of Bottas on his first run, but Norris split the pair on his first run to go second fastest.

Russell switched to the soft tyres with just five minutes left in the session as the track dried, with Daniel Ricciardo, Norris, Fernando Alonso and Sainz following suit by switching to the dry rubber.

But just as pole position looked secured, Hamilton slid into the barrier at the pit entry, deranging the front wing and blocking Bottas in the process.

The reigning World champion’s error was Norris’s gain as the Brit managed to produce a superb final run to secure his maiden pole position in Formula 1, with Sainz an excellent second ahead of Russell who secured yet another top three starting slot for Williams.

Hamilton added insult to injury with a spin on his final run to qualify fourth, ahead of Daniel Ricciardo and Fernando Alonso, with Bottas a disappointing seventh ahead of Lance Stroll, Perez and Esteban Ocon who completed the top 10. 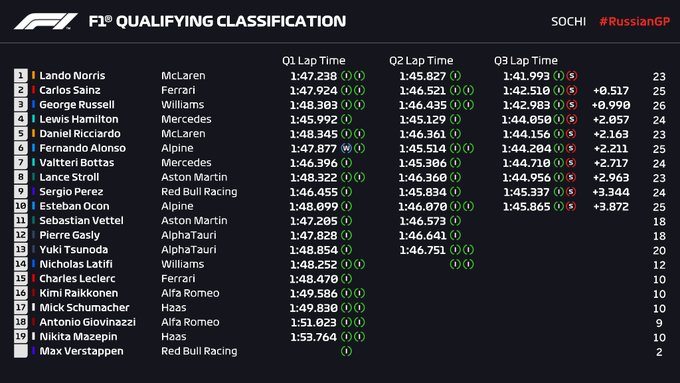 F1 | "A lot of positives" to take from 2022, says Norris: "I think we've honestly done a very good job the whole season"