Off the line, Verstappen got a superb start, got slipstream from the Mercedes of Bottas and outbraked Hamilton to take the lead. Hamilton followed.

Pole-sitter Bottas, got spun around by Daniel Ricciardo as he dropped to the back of the field. The Australian broke his front wing in that incident.

Esteban Ocon got sandwiched by Mick Schumacher and Yuki Tsunoda, leaving the German and Japanese drivers out of the race with heavy damage.

Tsunoda and Schumacher are both out from the opening lap melee #MexicoGP 🇲🇽 #F1 pic.twitter.com/vIxzkekrwP

The chaos of the first lap opened the door for multiple drivers to gain places. Antonio Giovinazzi moved up from P11 to P16, with Russell finding himself in 9th from P16 on the grid.

It was a perfect restart from Verstappen as he bolted at the right time. Carlos Sainz passed Antonio Giovinazzi into turn 1 to take P6 from the Alfa Romeo. Alonso eased by Mazepin to take 11th, too. Crucially for Bottas’ race, he got overtaken by Ricciardo on the restart lap.

The lack of pace from the Williams this weekend started to show as Raikkonen and Alonso both eased past Russell to take P9 and P10.

Lando Norris continued his charge through the field following his penalty to move himself into P11 by lap 15 by overtaking Stroll, Ocon, Mazepin and both Williams’.

A bunch of drivers pitted early, with Giovinazzi, Russell, Ocon, Stroll, Latifi and Mazepin all putting on fresh tyres, filling positions 13-17 at that point.

Mercedes were the first of the big guns to pit with Lewis Hamilton on lap 30 as the seven-time World Champion changed to hards. Verstappen responded four laps later thanks to the big lead he built up in the first stint.

After taking the lead of his home race, Perez finally boxed on lap 41 and rejoined in P3, 10s behind Hamilton.

Stuck behind Ricciardo throughout his hard tyre stint, Valtteri Bottas’ nightmare day continued as a very slow second stop for the Finn destroyed his race even further.

Sainz and Norris were the last of the runners to pit on laps 43 and 45, with the Spaniard and Brit coming back out in P6 and P10 respectively.

Ferrari instructed Charles Leclerc to let Carlos Sainz by to try and get after Pierre Gasly and the swap took place for 5th with fourteen laps to go. The Ferraris swapped back with two laps left as Sainz couldn’t catch the Frenchman.

On a day of dominance, Verstappen strolled to victory to extend his championship lead by seven points.

Despite pressure late in the race, Hamilton fended off Sergio Perez for P2. The Mexican finished a solid 3rd in front of his home fans.

On the final lap, Valtteri Bottas took the fastest lap point from Verstappen. 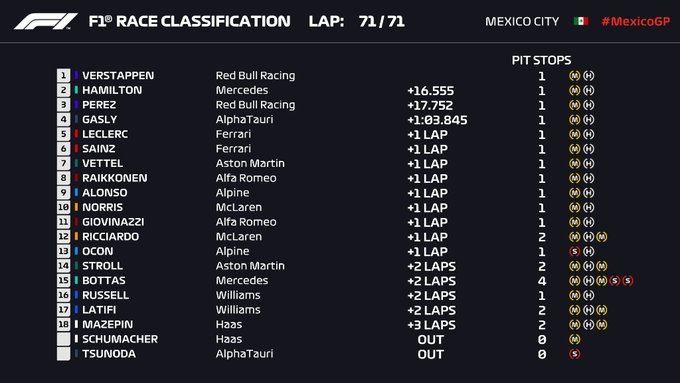