Although Mercedes started the race from the front row, Lewis Hamilton had to settle for 2nd place in the Mexican GP, while Valtteri Bottas was only able to finish 15th, after the 1st lap mess and a tangle with Daniel Ricciardo that pushed him to the back of the grid after the opening laps. If that wasn’t enough for the Fin, he has also been heavily criticised by his team principal and teammate for the start of the race, namely for leaving too much space that helped their biggest rival, Max Verstappen, to pass both of the Mercedes and become the leader already in the beginning, that obviously helped him secure the 1st place after all.

Hamilton described the entire situation by saying: “I had envisaged it differently, naturally, in the sense that Valtteri maybe would get a better start and I would have tried to get into his tow.

“But obviously I was alongside him, which was good. And then I was just covering my side of the track, trying to make sure no one could come up the inside so I was trying to keep whichever Red Bull I could see in my mirror behind.

“I thought Valtteri would be doing the same but obviously he left the door open for Max. And Max was on the racing line so he did a mega job braking into turn one and because I’m on the inside in the dirt there was no hope for me.”

Mercedes Team Principal Toto Wolff seemed even more unimpressed with the Finnish driver, as he told SkySportsF1: “That should not happen. I think we had two cars in front and seemed to open up the seal for Max to come around the outside. The spin afterwards and a complete loss of points with Valtteri’s car, when that could have been a third or fourth place, is annoying to say the least.”

Despite the harsh words towards one of his drivers, Wolff believes holding Verstappen behind them just wouldn’t be enough in order to prevent Red Bull from winning the race. As he said during the same interview: “You have to congratulate Red Bull because the pace was just on another level. I don’t think we could have won the race, even if we would have stayed ahead in the first corner because they could have driven circles around us, around the pit stops. So at the end, I think for Lewis’ championship, it was damage limitation. As for the constructors, Valtteri spinning out turn one was just very painful.”

After the emotions died down a bit, Hamilton took to instagram to clarify his words after the Mexican GP. In an instagram story, we could read: “We all have bad days. We live and we learn. Yesterday I said that vb left the door open and naturally people will jump to criticise. We are a team and we win and we lose as a team. There is not a single person responsible for winning or losing, we do it together good or bad. You may be able to beat us but you can’t break us! Onto the next one Valtteri, let’s keep pushing bro” 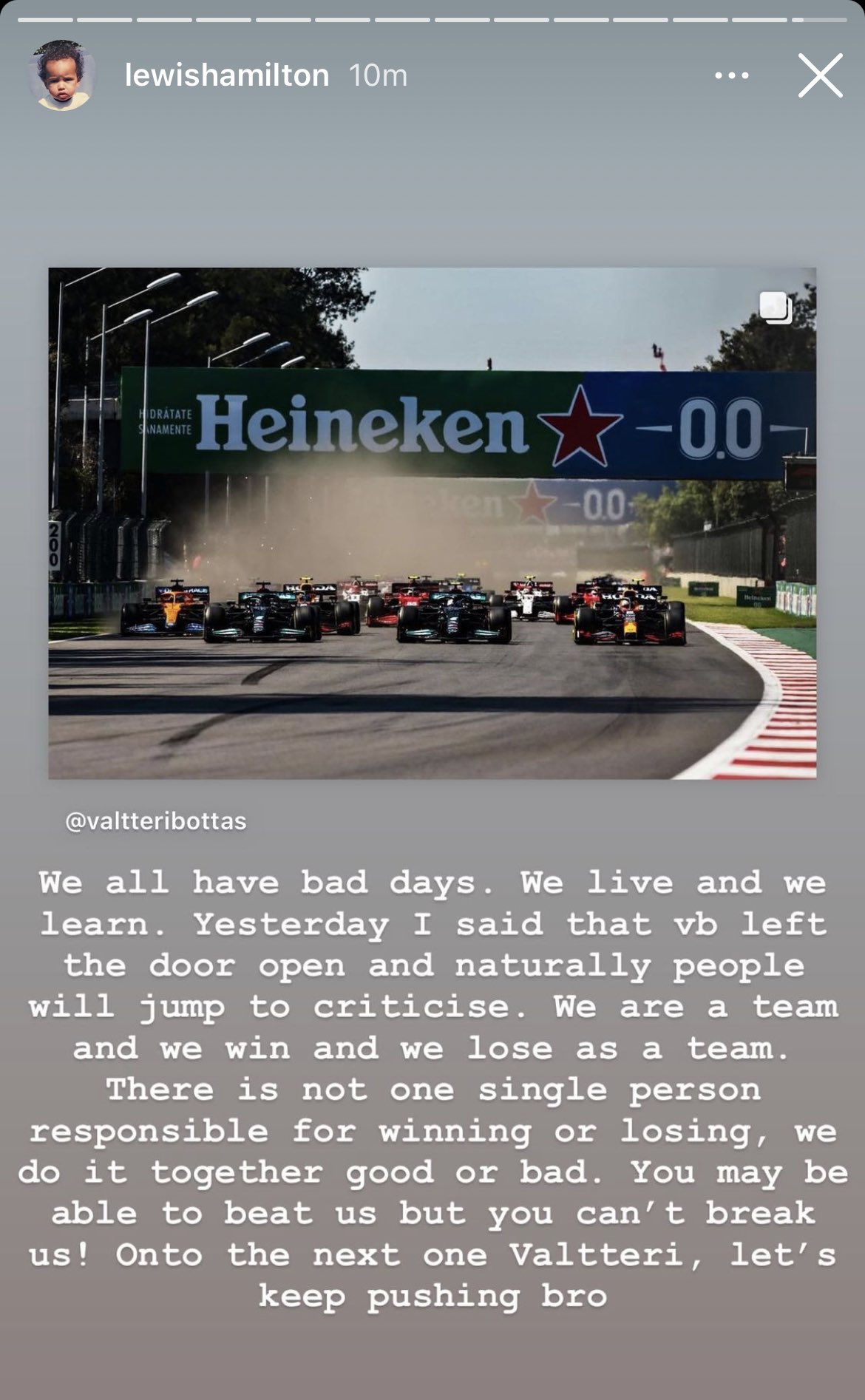 Do you think Bottas was really to blame for the incidents from the opening lap? Is the criticism justifiable, or was he used as a scapegoat by his team?

After all, this GP is definitely a write-off for Bottas - the incidents from the first laps of the race including being hit by Ricciardo, struggle to chase for points after being stuck behind the McLaren driver for a big portion of the race, slow pitstop and almost halted attempt to go for the fastest lap (which he eventually got) are things Bottas will need to move on from to focus on the performance in Brazil this upcoming weekend.

No points in Mexico 🇲🇽🏁

Disappointing race today. Got hit in 1st corner and even if I tried it all I could not make it back to the points today. Just not my day.

We take the learnings and let’s come back stronger in Brazil next weekend @MercedesAMGF1 👊#VB77 #F1 #MexicanGP pic.twitter.com/L8v8IvLfvc

F1 | Horner: Verstappen is not “crazy” and hopes for a clean finale in Abu Dhabi

F1 | Mercedes to end their partnership with Kingspan with immediate effect

F1 | Mercedes to end their partnership with Kingspan ...