Mercedes have taken a shock qualifying result with Lewis Hamilton beating Red Bull’s Max Verstappen by 0.438s to start from the top spot in tomorrow’s Sprint. Hamilton’s dominant performance, marred only by a deleted time as a result of a tracklimits infringement early in Q2, saw him finish the session 0.535s faster than teammate Valtteri Bottas in P3.

Hamilton will take a five place grid penalty for Sunday’s Grand Prix but will lead Verstappen to turn 1 in tomorrow’s sprint to set the grid. Bottas and the second Red Bull of Sergio Pérez will line up in P3 and P4 respectively behind the two title rivals. Verstappen will hope to hold onto his P2 in order to take advantage of Hamilton’s penalty and start from pole position on Sunday afternoon.

Behind the top teams Pierre Gasly once again put in a fantastic performance to put his AlphaTauri in P5 and best of the rest, his seventh top five qualifying result this season.

Ferrari put in a strong performance, with Carlos Sainz just 0.049s slower than Gasly to take P6 ahead of teammate Charles Leclerc. The team's strong qualifying performance means they will line up ahead of constructors’ rivals McLaren, who line up just behind in P8 and P9, for tomorrow’s Sprint. The two McLaren teammates were separated by just 0.059s with Lando Norris narrowly beating teammate Daniel Ricciardo.

Rounding out the top 10 is Fernando Alonso in his Alpine with teammate Esteban Ocon taking P11, the last driver to be knocked out in Q2.

Sebastian Vettel managed a time fast enough for P12, while teammate Lance Stroll suffered a difficult session, only managing a P16 result having been knocked out at the end of Q1.

The second AlphaTauri of Yuki Tsunoda took P13 followed by the two Alfa Romeo cars, with Kimi Räikkönen showing his ability by beating teammate Antonio Giovinazzi by over half a second as the Italian aborted his final Q2 run.

Rounding out the grid once again are the two Haas teammates, with Mick Schumacher beating teammate Mazepin. 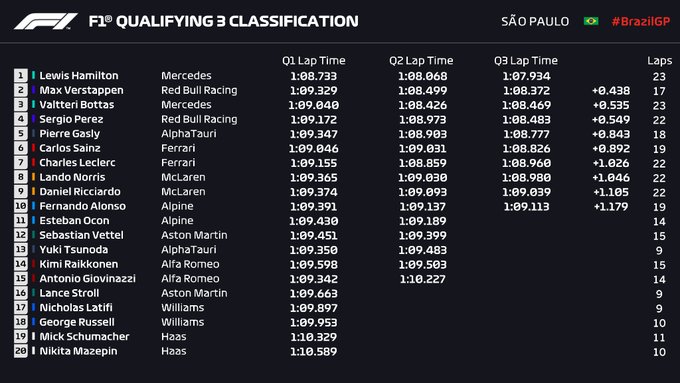