Max Verstappen put the disappointment of Sao Paulo behind him, with the fastest time of the opening Practice session at Losail.

The championship leader, who is still under investigation over his Lap 48 incident with Lewis Hamilton at the Sao Paulo Grand Prix, gave Red Bull plenty of confidence going into the second Practice session after going four-tenths quicker than Alpha Tauri’s Pierre Gasly on the soft tyres, whilst the Mercedes duo of Valtteri Bottas and Lewis Hamilton, were third and fourth quickest, despite the Brit having to pit with damage in the closing stages of FP1.

The opening Practice session at the Losail circuit was a historic one, as Formula 1 began its first weekend on Qatari soil, in front of a sparse crowd that baked in the sunshine, with the ambient temperature before Practice topping 28 degrees, whilst track temperatures hit 42 degrees.

Sergio Perez and Nikita Mazepin went into the opening Practice session with the advantage of being the only two drivers to have either raced or driven the Losail circuit. Perez, in particular, took victory in GP2 Asia at this venue in 2009.

First to venture out on track was Alfa Romeo’s Kimi Raikkonen, with the Haas pairing of Mazepin and Mick Schumacher following the 2007 World champion out of the pits as the rest of the field trickled out slowly onto the Losail circuit.

Charles Leclerc was the first driver to lay down a benchmark with a 1:27.058, but Championship leader Verstappen quickly beat that time after the Dutchman went over two tenths quicker than the Monegasque to top the opening stages of the session with a 1:26.829.

With a quarter of the session gone, Verstappen led Lando Norris and Valtteri Bottas, with the Red Bull team leader being the first driver to break into the 1:24s with a 1:24.998 on the Hard tyres.

Verstappen extended his advantage at the top of the timesheets with a 1:24.855, over a tenth quicker than his previous run.

Several drivers tested the limits of the new circuit, as the likes of Sebastian Vettel and Hamilton ventured wide onto the green kerbs, testing the strength of their floors and front wing endplates.

After running wide over the kerbs, Norris picked up a small amount of bodywork damage, with the Brit being pulled into the pits to commence repair work.

At halfway, Verstappen led Norris by over three tenths, with Bottas and Hamilton close behind in third and fourth ahead of Gasly and Leclerc.

Vettel shot up to fourth in the times with his front run on the soft tyres. But smiles quickly dropped at Aston Martin as Vettel’s teammate Lance Stroll suffered a hydraulics failure at the pitlane entrance, with the Canadian’s session brought to an end with over twenty minutes left.

Norris was back in the wars after going onto the kerbs at the exit of Turn 15, damaging the McLaren’s floor and causing more bodywork to fall off, forcing the Brit back into the pits for repairs.

Verstappen still maintained his advantage at the front of the timesheets with just 15 minutes left to go in the session, with Bottas and Hamilton second and third but over four-tenths down.

Schumacher was the first driver to venture into the gravel traps at Losail, with the German locking up going into Turn 7, spreading gravel all over the run-off areas.

None of this troubled Verstappen, who finished the session quickest ahead of Gasly and Bottas, with Hamilton fourth but over seven-tenths down on his young adversary.

Yuki Tsunoda was an excellent fifth ahead of Carlos Sainz and Leclerc, whilst Perez was eighth quickest in front of Alpine’s Esteban Ocon and Norris. 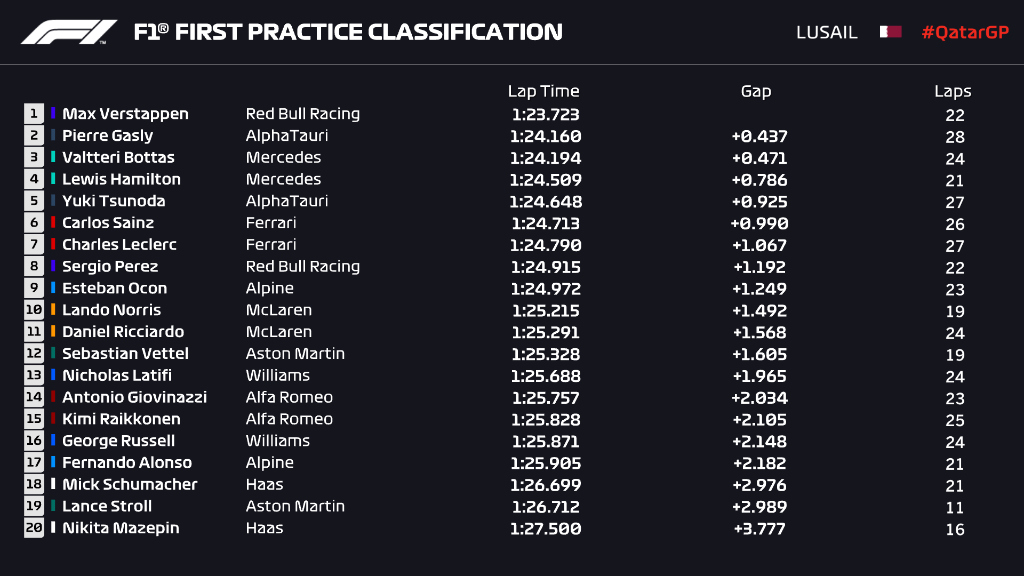 F1 | Saudi Arabian GP | Marko unhappy with race stewards: ''We feel we are not treated the same'' as Mercedes