In a race that featured two red flags and several accidents, Hamilton and Verstappen duelled for almost the whole race, with the pair colliding on Lap 37 in what was the latest incident between the pair.

Formula 1's maiden visit to Jeddah had been a dramatic one in the run-up to race day, with several drivers making unwanted visits to the walls during the Practice and Qualifying sessions.

Mercedes locked out the front row for the fourth time this year, with Hamilton securing the 103rd pole position of his career ahead of Bottas.

Verstappen would line up third despite concerns that his gearbox was broken after hitting the wall on his final run in Qualifying, whilst Charles Leclerc would be alongside the championship leader after qualifying an impressive fourth on the grid.

Perez would lineup fifth alongside the ever consistent Pierre Gasly, with Lando Norris and Yuki Tsunoda filling out Row 4.

Esteban Ocon gave Alpine's fuel and lubricant supplier Castrol plenty of reasons to feel optimistic on the eve of their 100th race with ninth, ahead of Alfa Romeo's Antonio Giovinazzi, who completed the top 10.

Before the start of the race, a minute silence took place at the front of the grid in memory of Sir Frank Williams, who passed away last week at the age of 79, with Williams's first World Championship winning car the FW07 being driven around the Jeddah Corniche Circuit by the 1996 World Champion Damon Hill.

At the greenlight Hamilton got a good launch from pole position and held his lead on the run down to Turn 1, with Bottas helping Hamilton out by covering off Verstappen as the field squeezed through the first corner without incident.

Further back Ocon made a flyer of a start and was upto seventh after dispatching Gasly and Ricciardo on the opening lap. However the Frenchman would give his Alpine team reasons to be slightly concerned after making contact with Tsunoda on the run down to Turn 1.

After the opening lap Hamilton led Bottas by just under a second with Verstappen third ahead of Leclerc, Perez, Norris and Ocon with Gasly down to eighth after losing two positions on the opening lap.

Fernando Alonso had moved up to 10th by Lap 6, but after the Spainard straightlined Turn 1, Alonso looked destined to be told by his engineer hand that position back to Giovinazzi.

Giovinazzi decided not to wait for the two-time World Champion to let him through, with the Italian going around the outside of Alonso to move himself back up into the points.

Ricciardo made full use of his Mercedes power unit to breeze past Gasly for eighth place down the main straight, whilst Alonso lost another position to countrymen Sainz one lap later, dropping him down to 12th.

Mick Schumacher’s race came to an early end on Lap 10 after spinning into the barrier at Turn 23 with the safety car being brought out to retrieve the German’s stricken Haas.

Hamilton decided to make full usage of the safety car period by pitting from the lead on Lap 11, with the Mercedes crew getting their man out in front of his teammate Bottas who also pitted for fresh rubber.

Perez also boxed for fresh hards along with Leclerc and Norris, whilst Red Bull elected to keep Verstappen out on his used mediums, giving the Dutchman the race lead ahead of Hamilton and Bottas, with Ocon now up to fourth although he had still yet to stop.

But just as it seemed, Verstappen would be back behind the two Mercedes after his pitstop; he was given a get out of jail free card when the race was stopped on Lap 13, giving the Dutchman a free tyre change under the red flag.

On Lap 15, the race was restarted with Verstappen getting a poor launch from pole and subsequently lost the lead to Hamilton into Turn 1 before cutting the corner and pushing Hamilton wide on the corner's exit, helping Ocon into second place.

On the exit of Turn 1, Perez and Leclerc made contact sending the Mexican into a spin, which caused Nikita Mazepin to slam into the back of George Russell, eliminating both cars in the process, with the red flag back out to retrieve Mazepin’s destroyed car.

Perez was also out as well, as the damage he sustained in the collision with Leclerc was too much for him to continue.

Before the third restart, Michael Masi deemed that Verstappen’s Turn 1 move on Hamilton was illegal. The Australian decided that Ocon would now start on pole, ahead of Hamilton, Verstappen, and Ricciardo.

Restart number 3 saw Ocon make a good start from pole. Still, Verstappen made the best start of the three, retaking the lead at the exit of Turn 1, with Ocon holding his second place ahead of Hamilton despite making contact with the reigning World Champion.

Ocon’s joy was short-lived one lap later, with Hamilton repassing the Frenchman down the main straight to move back up into second.

Despite setting the fastest times in the first sector, Verstappen could not pull away from Hamilton, with the Dutchman forced to spend a couple of laps saving the battery, giving the Brit a chance to put himself in DRS range.

Tsunoda’s messy race got worse on Lap 23 after making contact with Sebastian Vettel at Turn 1, deranging the Japanese rookie’s front wing, and bringing out the Virtual Saferty car in the process, with Tsunoda being awarded with a five second time penalty for the incident.

By half distance Verstappen led Hamilton by over a second, whilst Ocon was third ahead of Ricciardo, Bottas and Gasly with Giovinazzi running an excellent seventh ahead of the two Ferraris and Lance Stroll.

Alonso’s poor Saudi Arabian Grand Prix managed to get even worse with a spin on Lap 26, but luckily for the Spainard he managed to get going again untroubled.

Kimi Raikkonen was forced to pit for a new on Lap 27 after making contact with Vettel into Turn 3, with the German’s rear wing being severely damaged because of the collision.

The VSC was brought out for the third time on Lap 30 to clean yet more debris off the circuit, with racing resuming on Lap 33.

As Hamilton closed in on Verstappen, the VSC was brought out again for another lap to clear yet more debris from the track; however, at the restart, Hamilton managed to get alongside his young adversary on the run down to Turn 1.

But neither driver made the corner, forcing them both off, with Verstappen retaking the lead.

The Dutchman was then told to let the Brit through by his race engineer Gianpiero Lambiase. The pair made contact after Hamilton slammed into the back of the championship leader, damaging his front wing in the process.

Bottas’s charge to the podium continued with an easy move on Ricciardo down the main straight on Lap 40.

Verstappen finally let Hamilton through on Lap 42 before quickly repassing him a lap later.

The stewards then handed Verstappen a hammer blow to his chances of winning the race after being awarded with a five-second time penalty for cutting the corner at Turn 1, with Hamilton retaking the lead again with five laps to go.

Vettel's bad day at the office ended with four laps to go as the German was brought in to retire his stricken Aston Martin.

In spite of struggling with a severely damaged front wing, Hamilton took victory in Jeddah ahead of Verstappen and Bottas, who managed to snatch third from Ocon on the line.

Ricciardo came home fifth ahead of Gasly and Leclerc, with Sainz, Giovinazzi and Norris rounding off the top 10. 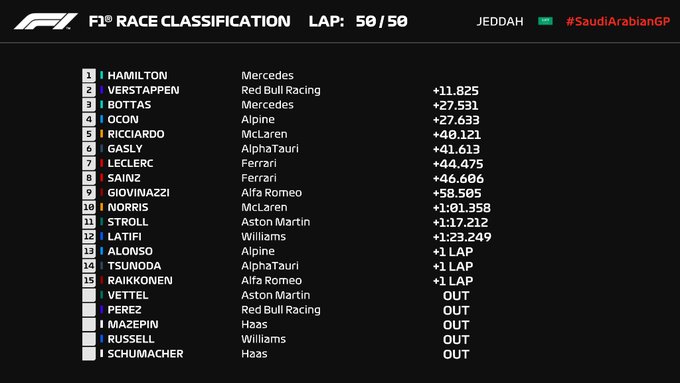