On a beautiful Friday afternoon in Melbourne, the 20 drivers hit the track for the first session of the weekend following a 3-year break from the Australian venue because of the pandemic.

At the 10-minute mark, Verstappen’s 1:21.625 on softs put him 1.4s ahead of Norris and Stroll respectively, both using mediums.

Leclerc and Hamilton completed the top 5. The Ferrari and Mercedes were on the hards.

The championship leader soon improved, moving to within 0.3s of Verstappen.

However, the World Championship continued to lower the benchmark on his softs, lowering it to a 1:20.909, 0.9s ahead of Norris, Leclerc and Ricciardo a third of the way into the session.

Ocon, Tsunoda, Vettel, Alonso, Hamilton and Stroll completed the top 10 at that point.

A red flag was brought out soon after as something fell off Sergio Perez’s car; it ended up sitting on the racing line on the main straight.

We have a brief stoppage while marshals recover a piece of Sergio Perez's car on the racing line#AusGP #F1 pic.twitter.com/FpLPxMOUs8

When the session got going again, Carlos Sainz vaulted up to 2nd, 0.340s adrift of Verstappen on the hard compound at the halfway point.

Vettel, Perez and Hamilton all moved into the top 5 by using the softest tyre.

Ferrari showed their strong form once again as they went 1-2 after switching to the softest tyre. Sainz’s 1:20.325 was 0.052s faster than Leclerc.

The Spaniard went even faster later on the same set of tyres as he logged a 1:19.806.

A second red flag of FP1 was brought out as Sebastian Vettel’s AMR22 broke down on circuit. Smoke was coming out of the four-time World Champion’s car.

Sebastian Vettel comes to a stop on the back straight 😫#AusGP #F1 pic.twitter.com/G0r4ZVK9ey

As well as the red flags, Charles Leclerc and Kevin Magnussen had off course excursions at turns 1 and 3 respectively. Fernando Alonso spun at turn 11.

Right at the end, Leclerc had another moment as he ran into the gravel on the exit of turn 12.

There will also be multiple investigations after the session as impeding was a big topic in FP1.

Sainz’s time remained unbeaten and topped the session by almost 0.6s from Leclerc and Perez. World Champion Verstappen was 4th. 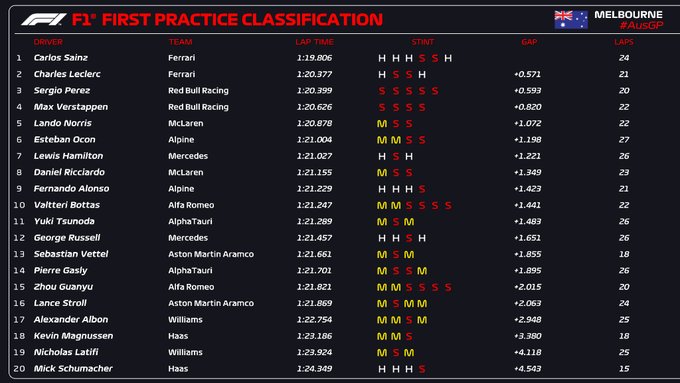 F1 | Abu Dhabi GP | Schumacher "simply didn't see" Latifi before they made contact, as the Canadian declares "it is what it was"

F1 | Ocon: "I lost 2.5kg this weekend because of stress" after Alpine beat McLaren to P4