Heavy rain fell at Imola after the conclusion of the F2 race, with the track wet at the start. All drivers started on the intermediates as the rain had stopped before the formation lap.

Off the line, it was a dream start for the Red Bulls as Verstappen led away from Perez as the Mexican made a lovely start.

In a role reversal of yesterday, Leclerc had a slow start and got jumped by Norris as well.

It was heartbreak for Carlos Sainz as he got hit by Daniel Ricciardo at the first chicane and ended up beached in the gravel for a second consecutive race.

Just after Ricciardo touched Sainz, Valtteri Bottas hit the Australian. Luckily for the Finn, he didn’t lose his front wing as the McLaren went through the gravel. Ricciardo dropped to the back.

A storming first lap from George Russell moved him up to P6 from 11th on the grid. Mick Schumacher lost the car and fell seven spots from his grid position to be P17.

Both Aston Martins gained four as Vettel and Stroll climbed to P9 and P11 respectively.

On the restart, Alonso dropped from 8th to 12th as Vettel, Tsunoda, Stroll and Hamilton all overtook him. Damage to his sidepod was hindering the Spaniard massively and was forced to retire.

Replays showed that as Schumacher had a half spin, his Haas touched the sidepod of Alonso’s Alpine.

A battle for P5 kicked off between Magnussen and Russell on lap 12. The Mercedes looked to have made the move at the first chicane but went too deep and the Dane went back through. However, the Brit eventually got the job done at the Variante Alta later in the lap.

Magnussen looked to be struggling with his rear tyres and Bottas breezed past a lap later into Rivazza for 6th.

Ricciardo was the first to switch to the dries, followed by Vettel, Gasly and Albon a lap later.

It worked an absolute treat for all three as Vettel moved up to 7th, with Albon and Gasly both passing Hamilton thanks to that decision.

Perez boxed a lap earlier than Verstappen and Leclerc, allowing him to stay in P2.

A slow stop for Hamilton, combined with an unsafe release by Alpine when they released Ocon into his path, saw him down to P14. Ocon was hit with a 5-second penalty for it.

Contact between Hamilton and Ocon in the pit lane 😮

A nightmare day for Mick Schumacher continued as he spun at Variante Alta after running too deep on the brakes, ending up on the grass.

A few laps later, Sergio Perez made an error at the same spot as the German, but didn’t spin and just maintained P2 from Leclerc.

DRS was enabled on lap 35 but overtaking was proving to be extremely difficult.

At the start of lap 41, Max Verstappen lapped his 2021 title rival Lewis Hamilton.

Following a very quiet spell in the race, Tsunoda overtook Magnussen for P8 on the 48th tour. He followed that up for 6th a few laps later on Vettel.

Ferrari pitted Leclerc on lap 50 from P3 as he was lacking the pace to challenge the Red Bulls. The Monegasque fell behind Norris but on much fresher boots overtook at the start of the next lap.

Perez and Verstappen responded one and two laps later respectively, and stayed in P1 and P2.

An error on lap 53 from Leclerc after taking too much of the sausage kerb saw the Ferrari spin at the Variante Alta from P3 as he tried to stay within the DRS of Perez. He damaged his front wing and fell to P9 following another stop.

Leclerc has gone into the barriers at the chicane!

He's got going again, returns to the pits and then out again on track but down in P9 #ImolaGP #F1 pic.twitter.com/242hWCCR8h

The World Championship leader made a late recovery, overtaking Magnussen, Vettel and Tsunoda to climb up to P6.

Out front, Verstappen eased to victory and set fastest lap in the process. Sergio Perez drove a strong race in the other Red Bull to collect a really solid P2. It was Red Bulls first since the 2016 Malaysian Grand Prix with Daniel Ricciardo and the Dutchman.

A quiet but outstanding drive from Lando Norris saw the Brit score a podium for the second straight year at the Italian venue.

George Russell fended off a charging Valtteri Bottas to finish an excellent P4 in the Mercedes.

It was a very disappointing P6 for Charles Leclerc, ahead of Yuki Tsunoda. Aston Martin had an excellent day as Vettel and Stroll scored points with 8th and 10th. They were split by the Haas of Kevin Magnussen.

Seven-time World Champion couldn't pass Gasly and ended up in a miserable 13th place as his nightmare start to the year continues. 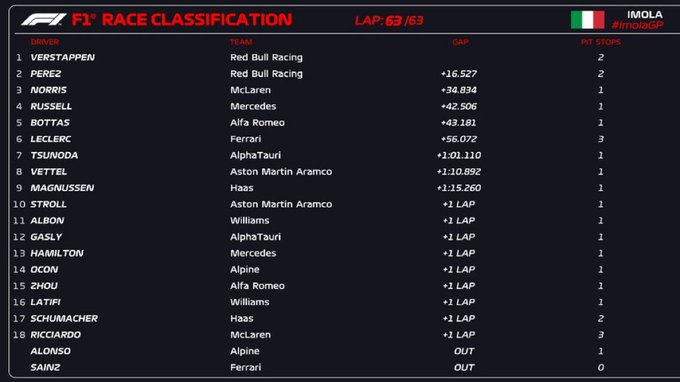 F1 | Monaco GP | A productive Friday for Alpine: “We learned a lot today, but we know in Monaco qualifying is crucial”