The highly anticipated Miami GP has officially begun on a sunny and warm day in Florida. The track temperature was 53.5 Celsius/128.3. Fahrenheit and it’s a warm day in the Magic City with 33.7 celsius/92 Fahrenheit.

The new surface offers new challenges for the drivers as they struggle to learn the track for the first time.

Pirelli has chosen the C2, C3, and C4 tyres to use for the inaugural Miami Grand Prix.

There was an issue with the track that emerged the day before on Turn 17. However, the track officials managed to repair the minor damage at Turn 17 before the first practice session started.

Verstappen causes the first yellow flag of the session as he touches the wall on the exit of Turn 16.

Carlos Sainz manages to set the fastest at 14 minutes in at 1:33:163. Followed by Leclerc then Vestappen.

George Russell sets the second-fastest time on softs, 19 minutes into the session. Mercedes has brought two upgrades to the Miami track, one on the endplate of the front win and some changes to the rear wing.

All Ferrari-powered cars will be using a new combustion engine except for Sainz. Sebastian Vettel received a black and white flag for crossing the white line at pit entry.

Valtteri Bottas causes a red flag as he loses the rear of his car and then hits the barrier causing the red flag with 24 minutes left in the session.

Sainz has the fastest time at 1:32.443 while the session stops to clear Bottas’s car from the barrier.

With fifteen minutes left, both of the Red Bull drivers struggle with cooling issues as Sergio Perez is in fifth and Verstappen in eighth.

The Red Flag ends and Sainz has a massive spin at T4. While he manages to avoid hitting a wall, he encounters a tyre puncture and has to pit for an older set.

Mercedes made changes to their cars under the red flag and have set faster times. Russell trails behind Verstappen in second with a difference of 0.97 and Alex Albon a shock third with five minutes left.

Leclerc flies to the top of the time at 1:31:098 followed by Russell and then Verstappen. Seven-time World Champion Lewis Hamilton finishes the session in eighth. 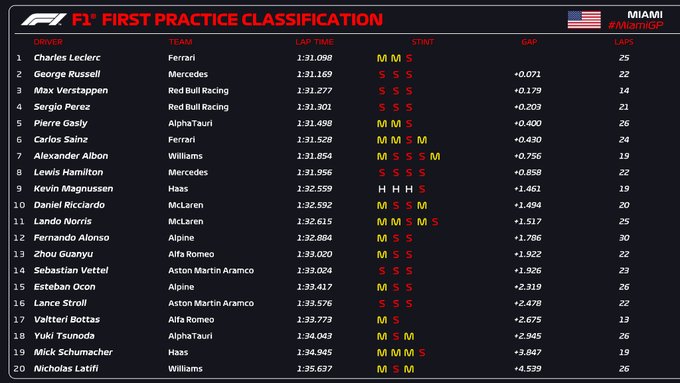 F1 | Monaco GP | Sainz on his last-minute crash: "I think I only picked up a puncture"