Charles Leclerc got his Spanish Grand Prix weekend off to a good start with the fastest time of the opening Practice session in Barcelona.

The opening Practice session, which was held in glorious sunshine and in front of a good crowd, saw two drivers make their Formula 1 session debuts with Nyck De Vries in at Williams for Alex Albon whilst Jüri Vips took over from Sergio Perez. Robert Kubica would make his first appearance of the season, subbing in for Zhou Guanyu.

At the greenlight, Sebastian Vettel led the field out onto the track, with Vips, De Vries and Carlos Sainz not far behind the German veteran. The remaining 16 runners later trickled out of the pits to begin their programmes.

Setting the initial pace on his first run was Max Verstappen with a 1:23.163, over seven-tenths faster than Leclerc and Daniel Ricciardo, whilst De Vries continued to test the limits of the FW44, locking up into the final chicane.

Leclerc then briefly took over at the front with a 1:22.820 before Verstappen banked in a 1:22.693 to move back to the top of the timesheets in the session’s early stages.

Verstappen then shaved off over three tenths on one of his next quick laps, with the reigning World champion setting a 1:22.394 as he returned to the pits to change his front wing and subsequently cut over two tenths off his lap time.

George Russell showcased that the heavily revised W13 was definitely an improvement on its predecessor as he managed to set the third-fastest time of the session opening twenty minutes, managing a 1:22.846 on the hard compound of tyres but still over nine-tenths down on Verstappen as most of the field returned to the pits before their next set of runs.

The Williams pair were one of the first to move onto the soft set of tyres, with De Vries the quicker of the pair and just under a tenth faster than regular driver Nicholas Latifi.

With most of the runners switching to the softs, the times as expected tumbled as Sainz became the first driver this weekend to break into the 1:19s with a 1:19.907 before returning to the pits.

Russell was the next of the top runners to venture out onto the softs setting a 1:20.164, over two tenths quicker than teammate Lewis Hamilton and over four-tenths slower than Verstappen also on softs.

Leclerc then made it a Ferrari 1-2 with over twenty minutes left after finding just under a tenth on his teammate, and with no one managing to improve, the Monegasque finished the session fastest ahead of Sainz, Verstappen, Russell, Alonso and Hamilton.

Of the third drivers, Kubica was the highest of the trio, finishing 14th, whilst De Vries did his chances of securing a future Formula 1 seat a World of good as he finished the session 18th and crucially just under a tenth faster than Latifi.

Vips finished his maiden Formula 1 outing 20th and last over four tenths down on Leclerc. 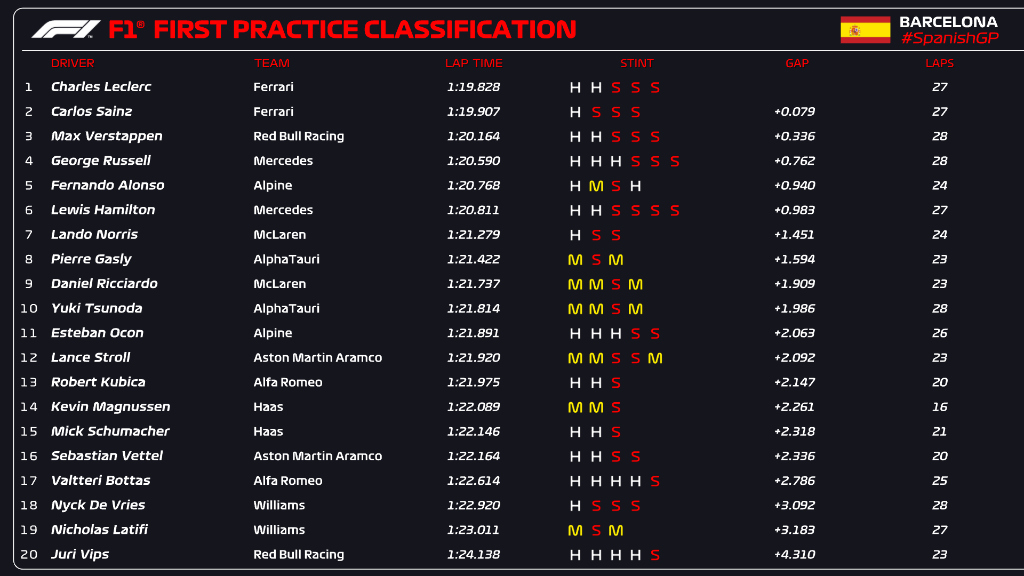 F1 | Canadian GP | Sainz feeling more confident after Canada: "I think I can say I was the fastest on track"

F1 | Canadian GP | Binotto on Sainz: "Carlos is gaining confidence with the car, he is driving faster and faster."

F1 | Canadian GP | Horner: “Too soon” to write Perez out of the championship fight, despite latest car failure