Charles Leclerc will go into tomorrow’s Qualifying session as the hot favourite for pole position after setting the fastest time in the second free practice session.

The current championship leader won’t have it all his own way in Qualifying, with the top seven separated by a tenth.

FP2 saw the return of Sergio Perez, Alex Albon and Zhou Guanyu to the cockpit after sitting out of the opening Practice session.

As a result of him missing FP1, Albon was one of the first cars out on track, with Perez also out early to try and make up the ground that he lost through sitting out of the first session going straight out on the mediums.

After going too hot into Turn 7, Lando Norris took a trip across the gravel, covering his tyres but crucially not damaging his car.

Valtteri Bottas’s session ended after just under ten minutes, courtesy of a technical failure on the run down to Turn 1, bringing the VSC out as the marshal removed the Finn’s car.

Albon and Carlos Sainz had a minor incident on the exit of Turn 2 when the Thai driver accidentally blocked the Spaniard, ruining his run, much to the latter’s disgust.

Green flag running recommenced with just over 45 minutes left as Max Verstappen led Sainz and Charles Leclerc whilst Perez, now on the softs, was seventh fastest.

Norris then made another mistake on the exit of Turn nine by going slightly onto the gravel, reportedly damaging his floor. However, luckily, he still managed to carry on despite this excursion.

Sebastian Vettel then briefly moved to the front of the timesheets after switching to the softs, banking a 1:20.703; but his and Aston Martin’s reign at the top was short-lived as Verstappen set a 1:20.006 over six tenths faster than the German veteran.

Leclerc led teammate Sainz at half distance, with the pair the only two drivers to break into the 1:19s, whilst Verstappen remained third and over three tenths down on the Ferrari pair.

With just under 25 minutes left to run, the Mercedes pair of George Russell and Lewis Hamilton split the two Ferraris on their first set of runs on the softs, with Russell second and the quicker of the pair.

Norris’s excursion put paid to any chance of him improving as the damage was too much for him to continue consigning him to the bottom of the timesheets.

With no one able to improve on their lap times, Leclerc finished the session fastest ahead of Russell, Hamilton, Sainz, Verstappen and Alonso, with the returning Perez finishing the session seventh fastest despite a late off at Turn eight. 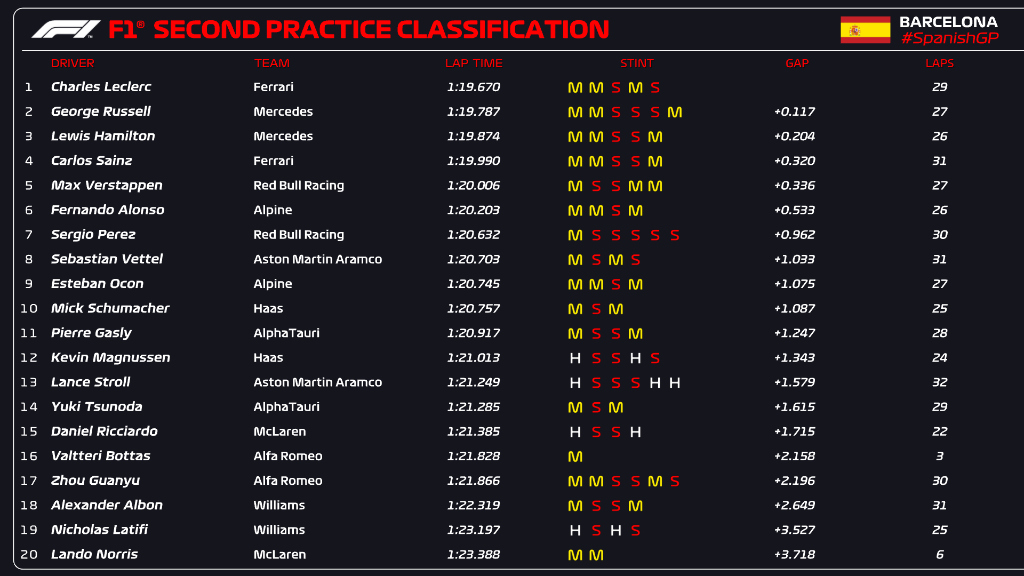 F1 | Canadian GP | Sainz feeling more confident after Canada: "I think I can say I was the fastest on track"