Charles Leclerc's 100% record of being fastest in every session so far this weekend in Barcelona continued as the championship leader finished FP3 on top.

The third and final Practice session of the weekend would give the teams an idea of what the tyre degradation would look like for Qualifying as ambient temperatures hit an unseasonably high 29 degrees before the session began, with track temperatures hitting 42 degrees when the green light went out.

First out on track was McLaren's Lando Norris, who was in a new chassis after his original chassis had been damaged during an off in FP2, ending his session earlier than expected.

Norris's teammate Daniel Ricciardo, Pierre Gasly and the Aston Martin pair of Lance Stroll and Sebastian Vettel were the first to head out on track. Valtteri Bottas was also out early after missing most of the second Free practice session because of an engine failure. Bottas set the early pace on the soft tyres whilst most of the early runners started on the mediums and hard compound of tyres.

Gasly's Alpha Tauri pulled back into the pits not long after completing a sighting lap as smoke billowed out of the AT03's engine, ending the Frenchman's session early.

He wasn't the only driver to suffer a technical issue as Mick Schumacher drove back to the pits with his right rear brake ablaze, narrowly avoiding hitting his mechanics as he crawled into the pits to join Gasly on the sidelines.

Home hero Carlos Sainz in his new chassis, was the first of the big players to venture out onto the circuit after fifteen minutes had passed in the session, and the Spaniard moved right to the front on his first quick run with a 1:20.484, that was immediately better by teammate Charles Leclerc who posted a 1:20.278.

Not long after the two Ferrari's had posted their first set of fast laps, Mercedes's George Russell and Lewis Hamilton made their first appearance out on track, with Russell going third fastest and Hamilton sixth over a second back on the Monegasque but suffering from a DRS issue. Sergio Perez also went out on track around the same time with the Mexican's first lap on the softs, a 1:21.518, only good enough for seventh before jumping up to third on his next set.

After just past halfway, Max Verstappen went out on track to set his first flying lap, with the Dutchman's time good enough for second fastest, but he will still over a tenth down on Leclerc as Red Bull continued to lose time in the middle sector.

Leclerc then broke into the 1:19s in the session's latter stages, with Sainz also improving, but he was still over three tenths down on his teammate's time.

Russell then split the Ferrari pair with over 17 minutes left, producing a 1:19.920 that helped him move in front of Sainz and Verstappen, although the Dutchman managed to move himself up to second on his final set of push laps.

The top eight were covered by less than a second as Leclerc finished on top ahead of Verstappen, Russell, Hamilton, Sainz, and Perez, with Norris and Magnussen the best of the rest. 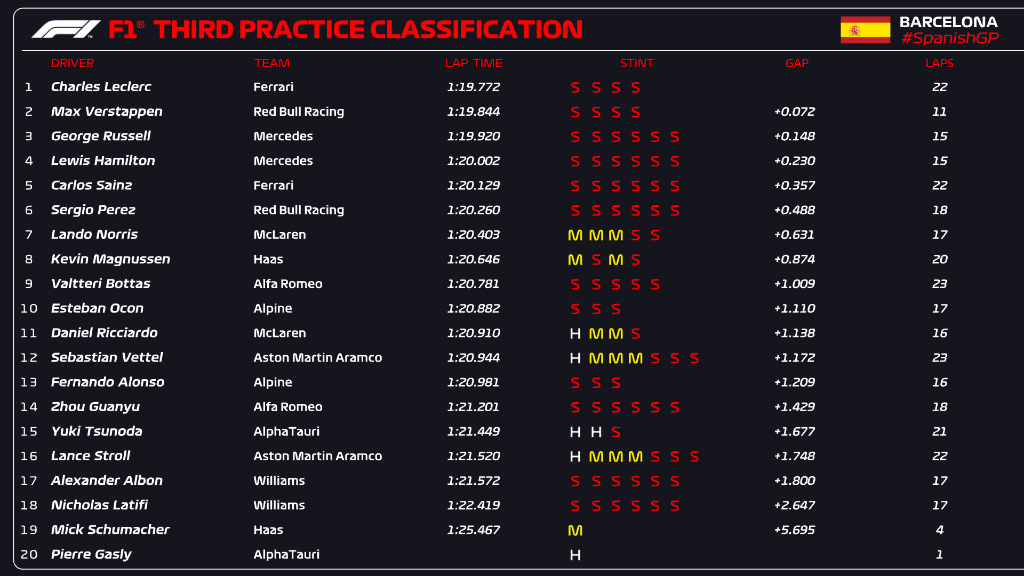 F1 | Hamilton: Mercedes to be "more cautious" when it comes to set-up experiments now