Charles Leclerc got his Monte Carlo Grand Prix weekend off to a dream start with the fastest time in FP1.

The Monegasque who grew up around these streets had a virtually trouble-free session despite being one of many drivers who briefly visited the Ste Devote escape road.

Lando Norris would start the session after declaring himself fit just before the session after the Brit struggling with tonsillitis since last weekend’s Spanish Grand Prix missed the morning’s press conference after being granted a medical exemption.

The first drivers to hit the track were championship Max Verstappen, Alex Albon, George Russell and Carlos Sainz, with 14 of the 20 runners also leaving the pits within the first two minutes of the session. Nicholas Latifi and Lewis Hamilton were the last two drivers to leave the pits as they waited for a clear track.

All the cars that left the track in the session’s opening minutes were on the medium compound of tyre, with the Ferrari pair of Leclerc and Sainz setting the early benchmark with a 1:15.883 over three tenths quicker than Verstappen.

Leclerc did make a brief visit to the Ste Devote after over 15 minutes passed in the session, but luckily for the hometown hero, all that was lost was a brief amount of track time.

Verstappen led Leclerc and Norris at the halfway stage by over three tenths, with Sainz fourth ahead of Hamilton and Ricciardo, whilst Perez was seventh but over a second down.

Next to move to the front was Norris with a 1:15.301, +0.026 quicker than Verstappen in second, with Hamilton and Ricciardo moving up into the top four after breaking into the 1:15s. The Australian then moved up to second after posting a 1:15.241 over a tenth behind his teammate.

Pierre Gasly found some speed in the latter stages of the session, briefly vaulting himself up to second with a 1:15.083, +0.027 behind Norris, who fell back to second after Verstappen, now on softs, produced a 1:14.712 before locking up at Ste Devote narrowly missing the barriers.

Kevin Magnussen also went down the Ste Devote escape road with just over 12 minutes left in the session, and like messers Verstappen and Leclerc, he avoided the barriers. 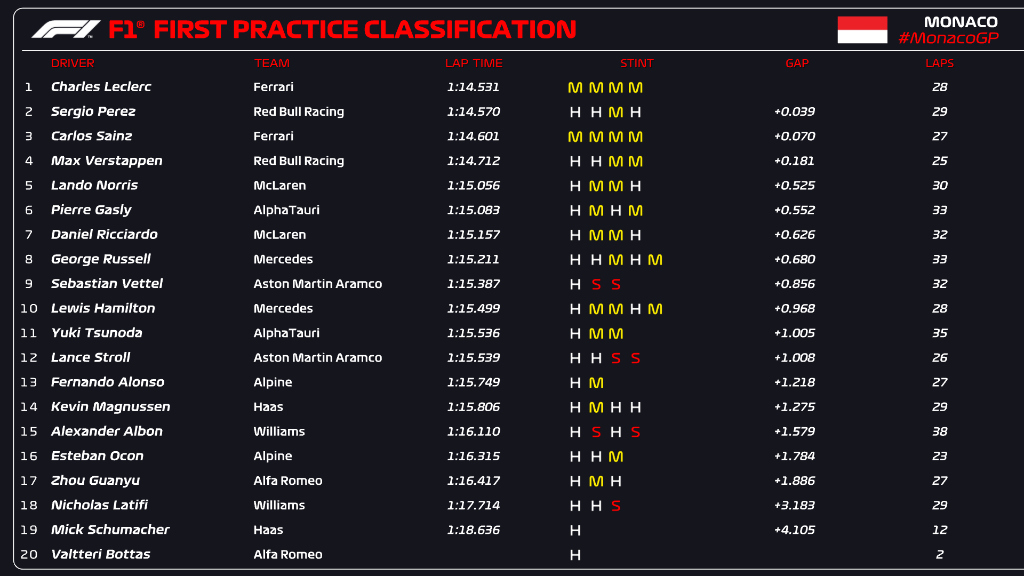