Charles Leclerc completed his Friday programme with a flourish after setting the fastest time of the second Free Practice session at Monaco.

In a session that was disrupted by Daniel Ricciardo’s heavy crash at the Swimming Pool section, Leclerc continued to showcase the Ferrari’s excellent speed around the tight streets of the Principality, with teammate Carlos Sainz second fastest and +0.044 behind his team leader. Sergio Perez led the Red Bull charge in third but over three tenths down on Leclerc, with Max Verstappen fourth fastest.

The day’s second and final Practice session would be yet another hot and humid session, with the ambient temperature hitting 30 degrees whilst the track temperature was at 53 degrees.

Mick Schumacher would start the session in spite of suffering a gearbox and MGU-K failure in FP1, whilst Valtteri Bottas would also change his MGU-K after suffering from the same issue.

Alex Albon led a queue of drivers out of the pits to begin the session as the rest of the field slowly followed suit whilst Ricciardo, Sebastian Vettel, Lance Stroll, Zhou Guanyu and Bottas stayed in their perspective garages for the start of the session.

Vettel then had a scare on the rundown to the Swimming Pool section, losing the rear of his Aston Martin, kissing the barrier and ruining his lap but luckily without sustaining any damage.

But just under 15 minutes into the session, Ricciardo became the first casualty of Monaco’s unforgiving walls as the Australian lost the rear of his McLaren coming into the Swimming Pool section slamming him into the barriers and ending his day’s work early.

When the session was stopped, Perez was out in front with a time of 1:14.001, whilst Verstappen and Leclerc were second and third fastest, setting identical times.

With Ricciardo’s car now removed, the session resumed with over 36 minutes left, much to the relief of Bottas and Zhou, who were some of the first drivers to leave the pits.

Now on softs, Leclerc got to the front of the timesheets with a 1:13.125 before shaving off over three tenths on his next run to break into the 1:12s.

He then extended his advantage over his teammate to over four-tenths on his next run before Perez briefly split the pair with a 1:13.035.

Lewis Hamilton had a brief scare at Mirabeau after locking up on the entry of the corner, forcing him to reverse out of the escape road.

Lando Norris added to McLaren’s damage bill with a kiss of the barrier at Anthony Noghes whilst several drivers were forced to straightline or take the scenic route around the Nouvelle Chicane.

Kevin Magnussen and Yuki Tsunoda would be making a visit to the stewards at the end of the session after an impeding incident between the pair down at the Nouvelle Chicane, with Tsunoda put under further investigation for speeding in the pits.

Norris and Stroll became the latest victims of the Ste Devote escape road with just over five minutes as the pair narrowly missed the barriers. 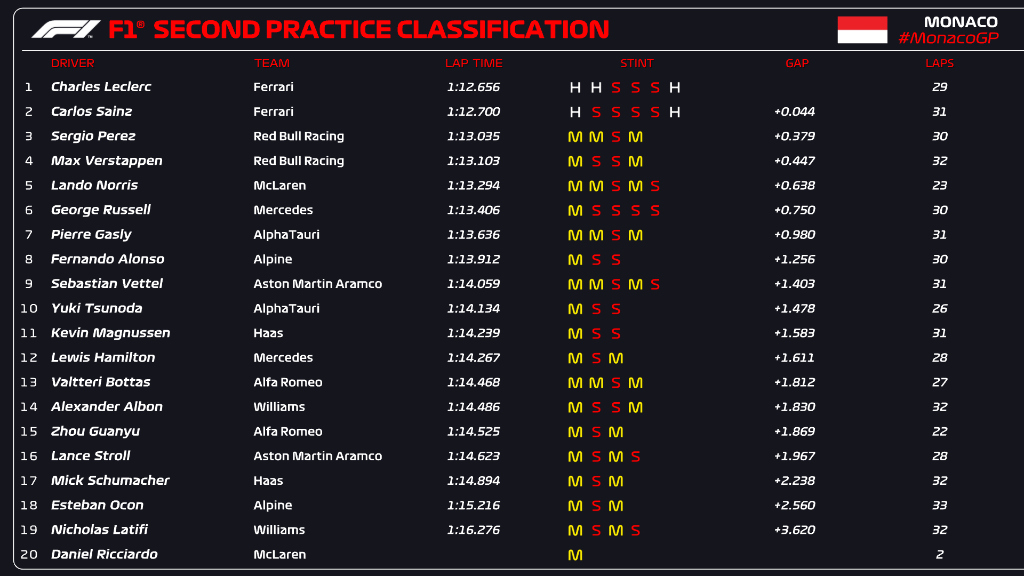