Sergio Perez put himself in contention to spoil the Ferrari party with the fastest time in the third Practice session.

The Mexican who is wearing a special Pedro Rodriquez inspired helmet this weekend managed to squeeze everything out of his Red Bull in the circuit’s second sector as he managed to end Charles Leclerc’s 100% record around the streets with the principality after narrowly improving in the session’s final seconds.

Although the weather was still sunny with zero chance of rain, temperatures had dropped overnight in Monte Carlo, with the ambient temperature a cooler 27 degrees whilst track temperature hit 51 degrees before the greenlight.

The first two cars to leave the pits when the green light went out were Nicholas Latifi and Kevin Magnussen, with the former hoping for a better day at the office after being over a second down on his teammate Alex Albon in the second Practice session. Latifi was the first of the early runners to set a time with a rather pedestrian 1:19.375 on the mediums.

Daniel Ricciardo was also one of the first out on track after losing nearly the whole of FP2 because of damage sustained in a crash at the Swimming Pool section of the course. The Australian’s first quick lap of 1:16.232 was over four-tenths slower than initial pacesetter Fernando Alonso’s time.

Carlos Sainz’s first hot lap saw him move to the front with a 1:14.114 over six tenths faster than his countryman, but Sainz’s time was bettered still by his teammate, who pipped him by just over a tenth.

Max Verstappen’s opening hot lap was only good enough for third, banking a 1:14.455 that was over eight tenths down on his championship adversary, who improved again with a 1:13.647.

Verstappen, too, improved on his next set of push laps, banking a 1:13.685 that was only +0.038 slower than the Monegasque, although that gap was later extended to over two tenths on Leclerc’s next series of laps.

However, it was all change at the front after over two minutes had gone when Sergio Perez put in a lap of 1:13.297 to go to the top, with Leclerc subsequently matching the Mexican’s time to go second ahead of Verstappen and Sainz.

Lance Stroll had a brief lock-up into Ste Devote, forcing him to carefully reverse out of the escape road and back onto the track.

With a clear track in front of him, Leclerc moved back to the front with a 1:12.885, four-tenths quicker than Perez and Verstappen, who briefly went quickest in the first sector before losing time in the second and third sectors.

Next to head down the Ste Devote escape road was Sainz, who locked up on the entry corner in what was a carbon copy of Stroll’s previous incident.

Lando Norris and Pierre Gasly gave McLaren and Alpha Tauri plenty of reasons to be optimistic that they could be in the fight for the second row after the Brit managed a 1:13.226, which was marginally bettered by Gasly with the pair just under a tenth quicker than Verstappen in fifth who later jumped to second with a 1:13.201.

In the latter stages of the session, the times continued to tumble, with first Sainz moving to the front before Perez banked a 1:12.777 that put him briefly at the top of timesheets. However, Leclerc wouldn’t be denied, and the home hero moved back to the front with a 1:12.702.

Stroll compounded Aston Martin’s problems by going too hot into the Swimming Pool section, launching himself over the kerb and damaging his front wing endplate. 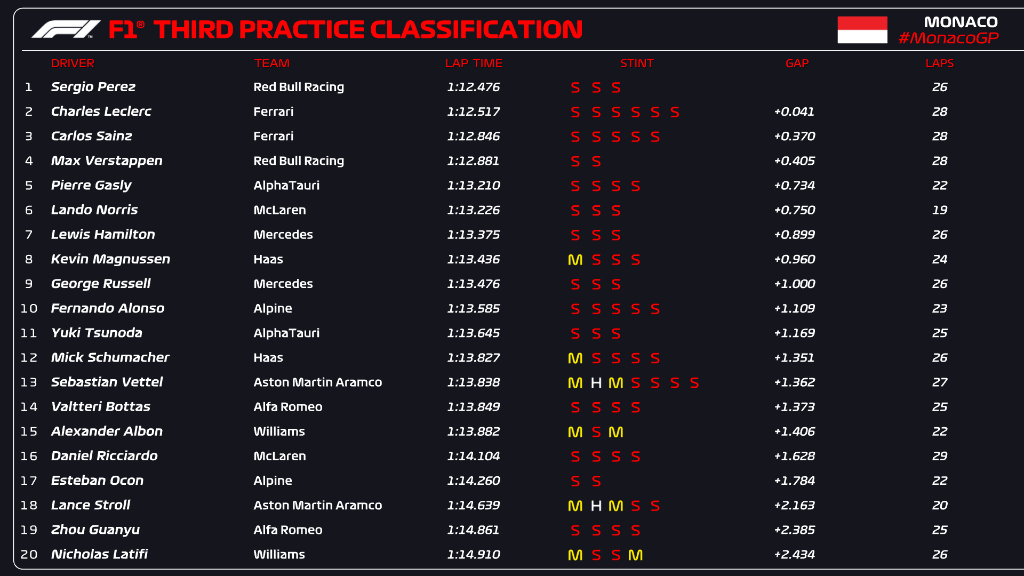 F1 | Wolff on Audi joining the grid: "Whoever joins as the 11th team, whoever gets an entry, needs to demonstrate how creative they can be for the business."

F1 | Gasly calls his relationship with Red Bull “very successful”: "I would never have been here" without them

F1 | Hamilton says he is thinking about “winning ...