Verstappen’s fifth win of the season has critical championship implications as polesitter Charles Leclerc suffered an engine failure on Lap 20 when leading the race, with Carlos Sainz’s DNF adding to Ferrari’s woes as they suffered their first double DNF of the season.

The sixth Grand Prix to be held on the fast and twisty Baku City circuit looked set to be yet another battle of Red Bull versus Ferrari as both teams locked out the first two rows of the grid as temperatures hit the late 20s just before lights out.

Leclerc’s superb final lap in Qualifying was good enough to secure his sixth pole position of the season, with Perez second despite having an erratic Q3 which saw him come out of the pits late to start his final run.

Verstappen would start third for the second year in succession ahead of Sainz whilst George Russell was the best of the Mercedes-powered runners in fifth ahead of Pierre Gasly and teammate Lewis Hamilton.

Yuki Tsunoda lined up eighth, with veterans Sebastian Vettel and Fernando Alonso sharing row five. 14 of the 20 starters would begin the race on the medium compound, whilst Daniel Ricciardo, Esteban Ocon, Valtteri Bottas, Lance Stroll, and Mick Schumacher would start on the hards.

At the start, Leclerc got a good launch from pole, but he locked up into Turn one and lost the lead to Perez. Further back, Verstappen held off Sainz’s advances to hold third as Perez strung out a lead of over a second from the Monegasque as the order remained virtually unchanged after the completion of Lap one.

Nicholas Latifi’s race was ruined by Lap three as he picked up a ten-second stop-go penalty for a starting grid infringement after his mechanics pushed him back onto his grid slot before the formation lap. The Canadian served his penalty one lap later, relegating him to last.

When the racing resumed, Vettel had seemingly waltzed past Ocon for ninth, but the German locked up into Turn three, losing him two positions and giving Hamilton a clear run at Ocon in ninth.

Verstappen finally moved into the lead on Lap 15 after making full use of the DRS to ease past Perez into Turn one as Leclerc continued to reel in the two Red Bulls with his fresher hard tyres.

Perez finally stopped on Lap 17 for hards handing Leclerc second place, but a slow stop meant the Mexican was now vulnerable to Russell’s attacks which ultimately came to nought.

After five laps of staring at the Alpine gearbox, Hamilton finally squeezed past Ocon on the run down to Turn three, moving him up to ninth.

Race leader Verstappen finally came in for his first stop on Lap 19, putting on the hards and rejoining behind Leclerc but crucially ahead of teammate Perez.

Leclerc’s lead, however, didn’t last long, as he suffered an engine failure on Lap 20, ending the Monegasque’s day and promoting Verstappen back into command of the race. Meanwhile, away from the cameras, Ricciardo moved up to fourth after Norris finally pitted for hards.

Gasly got him back one lap later, easing by the Australian on the front straight with Tsunoda sending the Alpha Tauri garage into a state of euphoria as he moved up to seventh after dispatching Ocon into Turn three.

Zhou Guanyu’s solid race came to an early end on Lap 24 as he suffered a technical failure at the exit of the castle section, making it three retirements as the race approached half distance.

Vettel finally got Ocon on Turn 3 on Lap 25 with an easy move around the outside, moving the German up to eighth. Hamilton got past Ricciardo for fifth on Lap 26 as the Australian’s 26-lap old hards continued to wilt.

At half distance, Verstappen led Perez by over seven seconds with Russell third and around 13 seconds back on the Red Bull pair whilst Gasly continued to run in fourth ahead of Hamilton struggling with back pain and Ricciardo, who had still yet to stop. Tsunoda continued to hold seventh with Vettel eighth in front of the Alpine pair of Alonso and Ocon, although the Frenchman had yet to stop.

Kevin Magnussen’s battle with Ocon ended on Lap 33 as he suffered an engine failure becoming the fourth Ferrari-powered car to retire from the race bringing the virtual safety car out and giving Red Bull and Mercedes a chance to pit both of their cars for a new set of hards with Ricciardo also in for a new set of mediums rejoining in front of Norris.

With Magnussen’s car now out of danger, the virtual safety car ended on Lap 35, and Hamilton wasted no time in using his fresher tyres to his advantage, blasting past Tsunoda down the front straight to move into fifth.

To add insult to injury, Tsunoda’s DRS broke in half on the run down to Turn three, earning him the black and orange flag and forcing him to pit for repairs as his Alpha Tauri mechanics tapped the damaged flap and sent him back on his way much to the fury of FIA technical delegate Jo Bauer.

Although he held a lead of over 15 seconds on Perez, Verstappen was ordered not to use DRS by his engineer Gianpiero Lambiase, but that didn’t stop the reigning World champion from lapping Schumacher and Stroll with relative ease.

Even though he was struggling with his back, Hamilton persevered and dispatched Gasly for fourth into Turn three with seven laps to go; however, the chances of him securing a podium seemed unlikely as he was over 23 seconds back on teammate Russell.

Latifi’s miserable afternoon was compounded as he picked up his second penalty of the afternoon as the stewards awarded him a five-second time penalty for ignoring blue flags.

Stroll was called in to retire with three laps to go as his Aston Martin team noticed some damage to his car, reducing the field to 15.

None of this mattered too much to Verstappen, who cruised to victory in Baku, one year on from losing a certain victory because of a tyre failure, with Perez putting the icing on the Red Bull cake as he came home second ahead of Russell.

Hamilton pushed through the pain to come home fourth ahead of Gasly, Vettel and Alonso. Ricciardo clung onto eighth in front of a disgruntled Norris whilst Ocon picked up the final point. 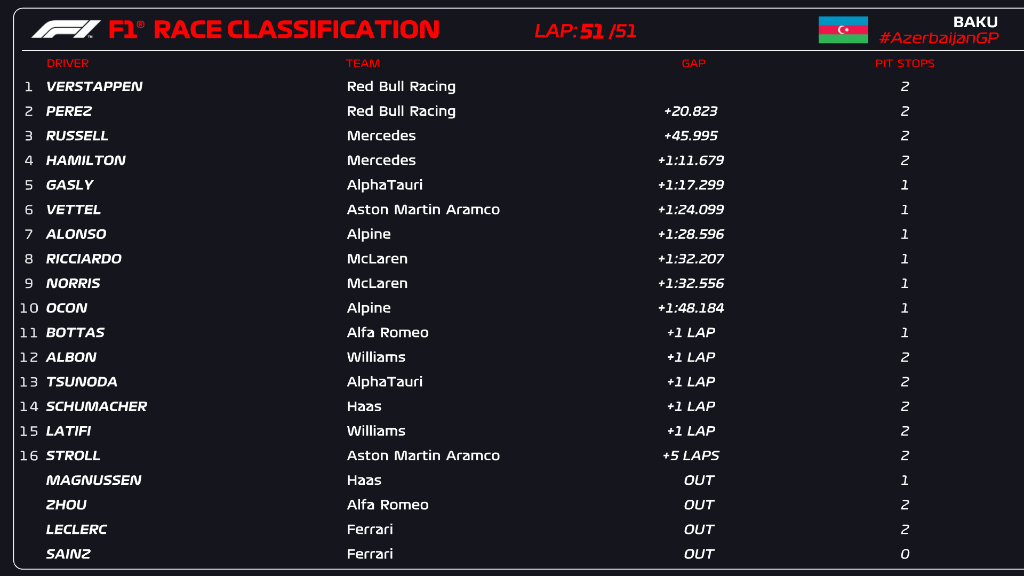