Valtteri Bottas got Alfa Romeo’s weekend off to a great start with the fastest time of a dour first Free Practice session.

With rain arriving just minutes before the start of FP1, most of the teams opted to stay in the garage rather than risk damaging their race cars.

Home heroes Lewis Hamilton and George Russell were the first drivers to explore the now greasy circuit. Ferrari’s Charles Leclerc and Carlos Sainz also ventured out on the intermediate compound of tyres.

The rain finally eased after just over twenty minutes had passed in the session but with the track still wet, most opted to remain inside the garage and wait for the track to dry out.

At the halfway point in the session, Sainz was quickest ahead of Bottas and Leclerc, with Mick Schumacher fourth and just under a second down on the Spaniard.

With light rain returning at the 20-minute mark, it seemed unlikely that anyone else would venture out on track, much to the disappointment of the crowd who had only seen nine cars set a time.

Hamilton tried to keep the crowd entertained by firstly waving to them before going back out on track setting a time good enough for seventh before switching to the soft tyres.

The Brit moved up to second on his new set of tyres, but he was still half a second down on Bottas, who moved to the front with a 1:42.249.

Even with the track drying out at a rapid rate of knots, Lance Stroll still got caught by the damp conditions spinning off into the gravel trap at Copse beaching his Aston Martin and ending the session early with Bottas finishing fastest ahead of Hamilton, Sainz, Leclerc, Schumacher and Zhou Guanyu. Only ten cars set a lap time. 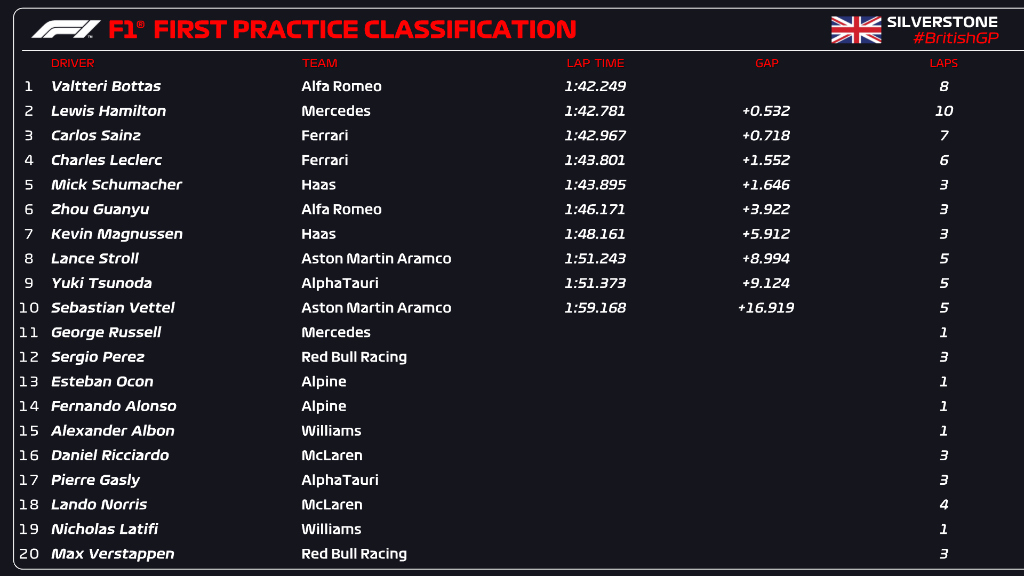 F1 | More flexibility, less pressure and a “psychological block” to overcome for Ferrari

F1 | Special | When Monza got cancelled for 72 hours