With the early morning rain that dogged the opening Practice session now a thing of the past, FP2 was full of action, with the top six separated by just over seven-tenths.

With only ten cars setting a lap time in FP1, all 20 quickly left the pits to begin their afternoon’s programme, with most of the runners starting the session on mediums.

The opening ten minutes of the session saw Sainz lead the session after setting a 1:29.962 before his Ferrari teammate Charles Leclerc bettered the Spaniard’s time by over three tenths.

Max Verstappen had a brief scare after reporting a vibration during the session’s opening stages, but that didn’t stop the Dutchman from splitting the Ferrari pair with a 1:29.885 before Sainz restored Ferrari’s 1-2 after banking a 1:29.543.

Lando Norris moved to the front, approaching half distance after setting a 1:29.118 on the softs, but the Brit’s reign at the front lasted just over a minute as Sainz, now also on softs, posted a 1:29.014, which he then bettered with his next push lap setting a 1:28.942.

Fernando Alonso and George Russell also started to find their groove after switching to the softs, with the Spaniard marginally ahead of the younger Brit as he managed a time of 1:29.695.

Lewis Hamilton’s session was disrupted after picking up rear suspension damage that consigned him to the garage as his mechanics frantically tried to fix the issue. Meanwhile, Verstappen continued to report a vibration as he moved back up to third after switching to the softs.

Norris had a rather bizarre incident in the pits as the team’s jack broke, dropping the Brit down without any tyres attached. Back on track, Hamilton moved into second with a 1:29.105.

Sebastian Vettel came into the pits to repair some minor floor damage, but after some quick work from his mechanics, the German managed to get back out on the track.

With no one else improving, Sainz held onto the top spot ahead of Hamilton, Norris, Verstappen, Leclerc and Alonso, with Sergio Perez seventh and over eight tenths down on the Spaniard. 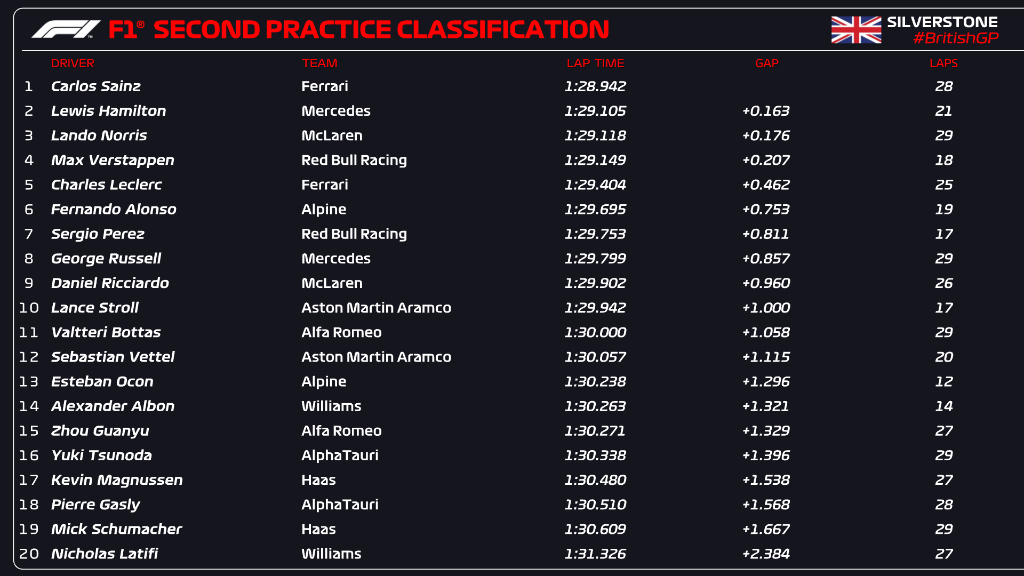