Max Verstappen set the fastest time in the final practice session on another warm day in France. The FP3 session was the last chance to modify setups before the qualifying session. Verstappen completed a  solid first run at 1:32:837 followed by Sergio Perez then Esteban Ocon who were all on the medium tryres.

15 minutes into the session and Lewis Hamilton set the fourth fastest time with a 1.784s gap to Verstappen on a set of soft tyres.

Both Ferraris came out on track twenty minutes after the session started. Carlos Sainz goes second fastest on softs behind Verstappen while teammate Leclerc puts down the seventh fastest time on hard tyres.

At the halfway mark, Verstappen remained at the top of times at 1:32.808 on meduims, with Sainz second on softs then Perez third on meduims.

McLaren split strategies between its two drivers with Lando Norris doing qualifying runs and Daniel Ricciardo on race runs. With twenty-six minutes left in the session. Norris is P7 and Ricciardo is P20.

Hamilton managed to make his way up to P3 on softs with 20 minutes to go and teammate Russell goes 13th fastest.

William’s driver Alex Albon moved up to P6 while his teammate Nicolas Latifi trailed behind him in P7.

Zhou Guanyu hit a kerb onT9 and radioed to his team to check on the car.

Sebastian Vettel’s session ended early and has to come into the pits due to some floor damage on his Aston Martin. The German driver was P20.

With seven minutes to go Leclerc told his team on the radio that his set of soft tyres were dead after completing only two laps.

The final practice session ended with Verstappen going the fastest 1:32.272, followed by Sainz with a .354 gap and Leclerc in P3.

Hamilton was fourth fastest and the second Red Bull driver Perez trailed him in P5 . Albon finished in the top ten at P8.

Carlos Sainz and Kevin Magnussen are taking new engine parts and that will put both drivers at the back of the grid for tomorrow's race. 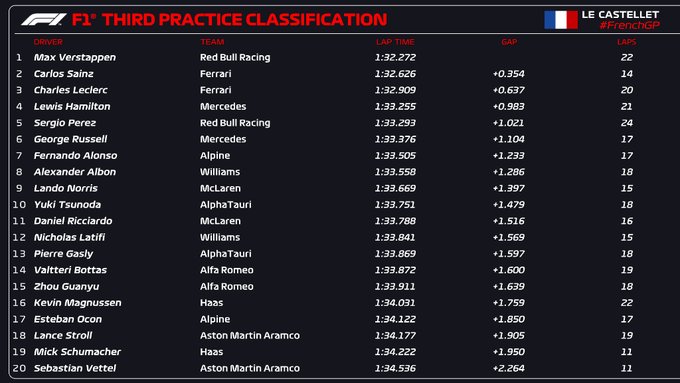