A very hot weekend at Le Castellet in France crowned Max Verstappen as the winner after another battle between Red Bull and Ferrari, which ended badly for Charles Leclerc, who was forced to retire after an accident that didn't involve any other car .

At 15:00 (local time) the Grand Prix began with a great start from Charles Leclerc and Lewis Hamilton who immediately took a position on Perez's Red Bull. A rather clean lap for everyone, with just a temporary yellow flag that lasted a few seconds, due to a contact between Esteban Ocon and Yuki Tsunoda, which caused a spin for the Japanese driver. He retired later in the race because of damage.

Magnussen also got off to a good start, finishing thirteenth on lap three after starting from the last position.

The fight between Verstappen and Leclerc was immediately very tight, with the Dutch driver under the second helped by the DRS and the slipstream of Ferrari. Leclerc reacted by making the best lap, breaking away slightly from Verstappen, while Perez was struggling to pass Hamilton.

Good work for Mercedes, with Hamilton doing a good tyre management job and Russell getting very close to Sergio Perez. Excellent first laps also for Alonso, in sixth position, as for Sainz who gained 9 positions.

Struggling from a lot of oversteering Leclerc was under constant pressure from Verstappen and the rapid speed of the RB18 (faster by three tenths in the middle sector), but still he managed to increase the distance.

Pit stop in 2.4 seconds for Verstappen, after 16 laps, who mounted hard tyres and struggled a bit in the traffic.

On lap eighteen Leclerc lost the rear and crashed into the barriers, causing a yellow flag and ultimately a safety car. Some drivers including Sainz, Hamilton and Perez, took advantage of it for the pit stop.

CHARLES LECLERC IS OUT OF THE RACE!!!

Sainz managed to reach the 5th position in a few laps, overtaking Alonso.

Sainz had to face a 5-seconds penalty due to an unsafe release that involved a Williams of Nicholas Latifi right after his pit-stop, but overall Ferrari was performing very well today. This helped the Spaniard to overtake George Russell and to climb to the 4th position on lap 31.

Lap 35 and it was a very tight fight between Ocon and Ricciardo for the 8th place, meanwhile Sainz was behinh Perez by just 1’1’’.

Yellow flag but immediately clear track when Latifi and Magnussen made contact on lap 39. After that the Danish driver was force to retire.

Three laps to go and a yellow flag in sector 1&2, as Zhou went of track, preceeded a Virtual Safety car. As the VSC ended, Russell managed to climb to the third place, by overtaking Perez.

Perez tries to chase down Russell for the final podium spot 👀 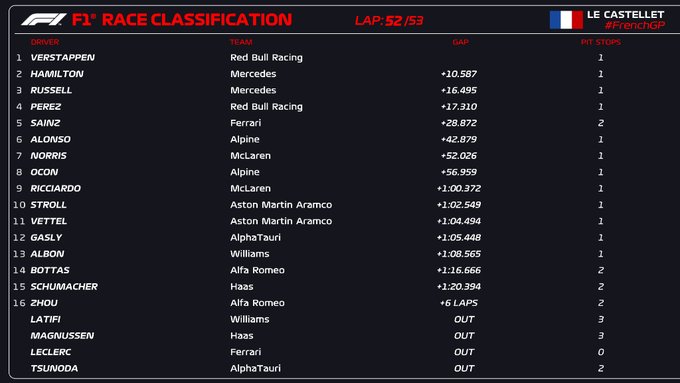 F1 | Red Bull: RB18 now suits Verstappen more than Perez, but it has nothing to do with its design