Carlos Sainz topped a vital first practice session at the Hungaroring for Ferrari ahead of the reigning world champion Max Verstappen and Charles Leclerc.

The top three were ultra competitive with just two tenths separating them with Lando Norris P4 for McLaren.

Sergio Perez struggled slightly in FP1 getting held up on the hectic circuit languishing down in sixth place just behind British driver George Russell.

At the green light Sebastian Vettel led the field out onto the track at a baking hot Hungaroring closely followed by Pierre Gasly and championship challenger Leclerc to begin the hour of running.

The Aston Martin’s of Vettel and Lance Stroll debuted an intriguing rear wing with a similar look to last year’s design in an attempt to gain more downforce in their underwhelming AMR22.

Championship leader Verstappen the early pace with a 1:21.235 for Red Bull on the soft tyre just in front of Carlos Sainz and Daniel Ricciardo with just two tenths between them.

The Spaniard soon snatched top spot in FP1 setting a 1:20.184 as his team mate Leclerc went into P2 ahead of Verstappen.

With a threat of rain over the weekend the track was very congested in the opening stages to gain as much track time as possible on the 2.722 mile circuit.

Alfa Romeo test driver Robert Kubica stepped in for Finnish driver Valtteri Bottas and found himself in P16 after a long stint on the hard tyres with 40 minutes to go.

The times continued to tumble as Leclerc raised the bar with a 1:19.426 just two tenths quicker than Verstappen, Sainz and Lewis Hamilton for Mercedes.

Gasly broke into the top ten at the halfway work with a 1:20.715 fractionally slower than his Japanese team mate Yuki Tsunoda as the track continued to rubber in.

Russell responded to the Ferrari’s and Red Bull’s quick times and went second fastest ahead of the championship leader Verstappen.

Haas driver Mick Schumacher ran wide at Turn 3 but avoided the barrier. He managed to continue in Practice as the German driver explored the limits of grip in FP1.

Turn 12 caught out Lewis Hamilton who went beyond the limits of his Mercedes, the 37-year-old ran wide in a harmless mistake and rejoined the circuit.

A plethora of drivers continued to make mistakes in typical FP1 style as Tsunoda locked up into Turn 1 flat spotting his right front destroying that particular set of tyres with 20 minutes left on the clock.

Red Bull’s Verstappen became the first driver to break the 1:19 barrier setting a 1:18.880 to go quickest just in front of the two Ferrari’s as the clock continued to tick down.

Ferrari continued to look peerless in the twisty middle sector with Sainz going quickest. He went a tenth faster than Verstappen setting the quickest middle sector of the session on tyres past their peak. 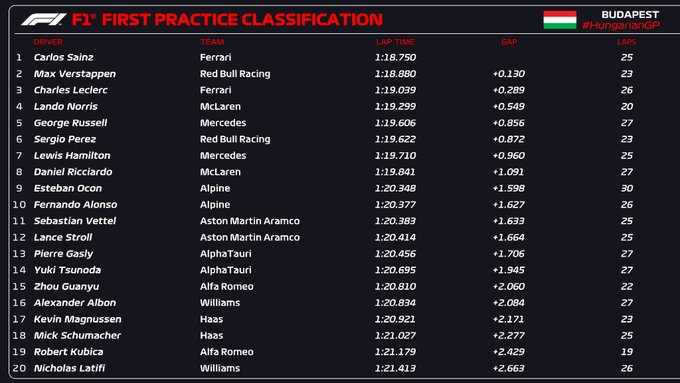