Heavy rain ahead of FP3 left the track soaked for final practice.

Carlos Sainz logged a 1:45.569 on full wets to kick things off after teammate Charles Leclerc went deep at the turn 6 and chicane. He then put together a lap as the Monegasque did a 1:43.364.

Everyone went out on full wets initially apart from Fernando Alonso, who chose inters. His first laps put him 5.8s off the pace. On his second lap he improved to P3, 2.4s off Leclerc.

The heavy rain returned around 15 minutes into the session and improvements suddenly became hard to find for drivers who had already bagged a time.

Magnussen, Guanyu, Albon and Gasly all had excursions at turn 4 as the standing water came into play. Spins and other off-track excursions continued throughout the session.

The rain eased again and Mick Schumacher took advantage in his Haas to jump into P3 behind the two Ferraris.

Verstappen, Perez and Hamilton hadn’t set a time or even gone out on track at that point.

Vettel and Magnussen moved up to 2nd and 4th respectively as the track got better. The Dane went purple in sector 1.

Along with Alonso, other drivers started to use the inters. The Spaniard had a huge snap in turn 3 but made a great save.

On his first lap on the inters, Charles Leclerc had a graceful 360 degree spin at turn 3. He then had a snap seconds later at turn 4.

Multiple drivers complained about a complete lack of grip, including George Russell and Lewis Hamilton.

A red flag was required with 9 minutes to go as Sebastian Vettel lost the rear heading into turn 10 and ended up in the barriers. The German had already been struggling on the inters as he ran very wide at turn 11 twice before his crash.

When the session resumed, times tumbled as the track got drier and faster. A 1:41.480 from Williams’ Nicholas Latifi saw the Canadian top the charts in final practice. It’s the first time he’s topped a session.

Behind the shock pace-setter, Leclerc and Latifi’s stablemate Alex Albon completed the top 3. 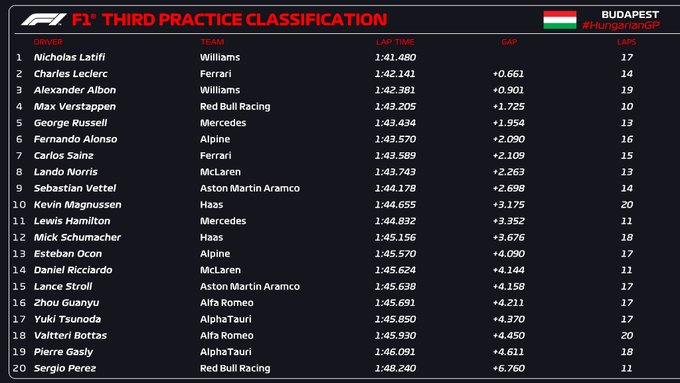 F1 | Toto Wolff on Mercedes' partnership renewal with Petronas: "We like to depend on each other"

F1 | Singapore GP | Alex Albon returns to action this weekend: "My preparation for Singapore has been a little different than normal but I’m feeling good"

F1 | Singapore GP | Alonso on Alpine's updates for Singapore: "I’m excited to see what it produces"