Charles Leclerc continued to showcase Ferrari’s excellent form at Zandvoort by setting the fastest time of the final Practice session.

The final Practice session began in glorious sunshine, with track temperatures hitting a pleasant 28 degrees before the start of the session.

Local hero Max Verstappen would be hoping for a better start to his Saturday programme after missing the first Practice session courtesy of a gearbox issue with the Dutchman’s teammate Sergio Perez one of the first to go out on track and the first driver to set a time on the softs banking a 1:13.792 but still struggling with the rear of his RB18.

There were no such problems for Verstappen; however, as on his first flying lap, the Dutchman produced a 1:12.309 over a second quicker than his teammate and Carlos Sainz, with Lewis Hamilton’s first lap on the softs a 1:13.388 good enough for fourth fastest but over a second down on the championship leader.

George Russell, who had gone fourth fastest in the session’s opening stages, had an unusual problem on the run down to Turn seven, reporting that pigeons were on the apex of the corner, ruining his lap in the process.

At the session’s halfway point, Verstappen remained top of the timesheets by over half a second from Leclerc, Hamilton and Sainz, with Russell over seven tenths back in fifth ahead of Lance Stroll and Mick Schumacher.

But Verstappen’s reign at the top was briefly disrupted when Sainz, now on a fresh set of softs, went quickest with a 1:11.971 over two-tenths faster than the Dutchman as the track continued to get quicker.

When the chequered flag waved, the top six were separated by just over half a second, with Fernando Alonso best of the rest in seventh ahead of Sebastian Vettel, Schumacher and Lando Norris. 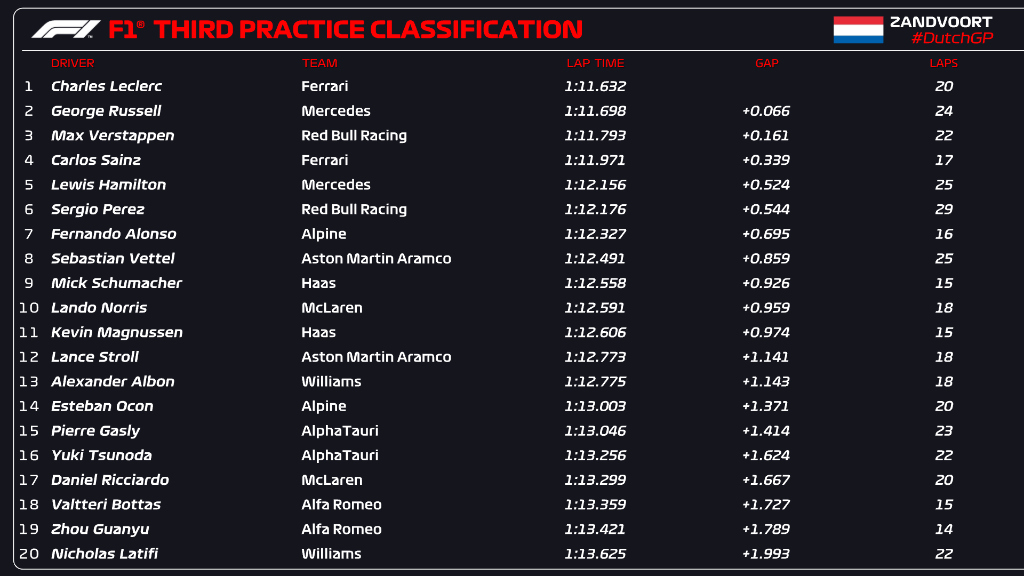