While the Red Bulls and Ferrari’s elected for the softs at the start, both Mercedes cars, Norris and Schumacher chose the medium tyres inside the top 10.

Off the start, the top five held position, but Russell lost out to fellow Brit Norris into turn 3. The Mercedes driver got back through on lap 3 when the DRS was enabled.

The big winners on the opening lap were Stroll and Ocon. The Canadian moved up from P10 to P8, with Ocon going from 12th to 9th.

Battling for 15th with Alex Albon on the second lap, Kevin Magnussen had a couple of snaps of oversteer into turn 3 and hit the barrier. Fortunately for the Dane, he didn’t pick up any damage.

The order at the end of lap 10 was Verstappen, Leclerc, Sainz, Hamilton, Perez, Russell, Norris, Stroll, Ocon and Schumacher.

Alonso started to make moves as he overtook both AlphaTauri on laps 10 and 12 respectively to move into 11th.

From P3 and P5, Sainz and Perez pitted at the end of lap 14. However, the Spaniard was stuck in his box for over 10 seconds as they didn’t have the left rear tyre ready. A normal stop for the Mexican put him miles clear of his main rival.

Along with Sainz, Mick Schumacher had a 10-second plus stop which dropped him towards the back of the field.

Leclerc pitted on lap 17, followed by Verstappen a lap later. The Dutchman comfortably remained in front. Mercedes, on their mediums, took the top two spots as Hamilton led Russell by 3s.

Norris, Alonso and Ocon all switched to the hards when they boxed. The Spaniard undercut early and got in front of his teammate – and crucially for the other teams, he showed superb pace on them.

A third of the way into the race saw Hamilton leading from Russell, Verstappen, Leclerc, Perez, Sainz, Norris, Stroll, Alonso and Ocon.

As Mercedes kept on going, Verstappen caught Russell. The World Champion pulled off a spectacular move around the outside into turn 1 on the Brit at the beginning of lap 28 to take P2.

Hamilton pitted from the lead at the end of lap 29 and rejoined the race in P5. Russell followed two laps later. Both fitted hards to go for a one-stop.

It left the order as Verstappen, Leclerc, Perez, Hamilton, Russell, Sainz, Norris, Stroll, Alonso and Ocon after everyone had made at least one-stop.

As Perez’s medium tyres fell away, Hamilton attacked in turns 1 and 11 on lap 36, but the Mexican managed to defend it. However, the seven-time World Champion got it done a lap later by going beautifully around the outside at turn 1. Russell repeated his teammates move two laps later.

Perez pitted soon afterwards to drop to P7. That became P5 when he overtook Norris and Sainz boxed.

Leclerc came in from P2 on lap 45 to got hards. He dropped to 4th behind the two Mercedes drivers.

A virtual safety car was required on lap 48 with Yuki Tsunoda pulling off the circuit as the AlphaTauri had been having issues for a number of laps. He had already stopped on track three laps earlier before continuing.

Tsunoda comes back in to the pits for running repairs before coming out again and immediately encountering problems again. He's parked up at the side of the track.

Verstappen (hards), Hamilton and Russell (mediums), Norris and Alonso (softs) all took advantage of it to put for new boots.

A full safety car was required on lap 56 as Valtteri Bottas’ Alfa Romeo broke down on the main straight. At that time, Carlos Sainz was passing Esteban Ocon for P6.

Bottas pulls up just before Turn 1 and, after a pause...

Verstappen initially boxed for softs, and that put him behind Hamilton and Russell. The younger Brit urged his team to put on softs as well, and they did so a lap later as everyone had to come through the pits as the marshals cleared Bottas’ car. The seven-time World Champion stayed on mediums.

Hamilton led from Verstappen, Russell, Leclerc, Perez, Sainz, Alonso, Norris, Ocon and Stroll was the top 10 when the race got back under way on lap 61.

On the restart, Verstappen got a massive tow through the final two corners, got a run and went around the outside of Hamilton for the lead with a well-judged move.

Behind them, Russell just fended off Leclerc, while Carlos Sainz produced a superb pass on Perez in turn 1 to take 5th.

On lap 64, Russell passed his teammate with ease on the softer tyres. Hamilton was left very angry on the radio. Two laps later he fell off the podium as Leclerc also used his fresh softs to breeze on by.

Carlos Sainz was awarded a 5-second penalty for an unsafe release in the pits when he pitted during the safety car period.

Verstappen controlled the race beautifully after taking the lead to take his tenth win of the campaign – and the 30th of his career.

George Russell equalled his best result in F1 with P2. Charles Leclerc completed the podium despite Ferrari’s lack of pace.

A dejected Lewis Hamilton only finished 4th with the wrong strategy, as Sergio Perez came 5th thanks to Sainz’s penalty. 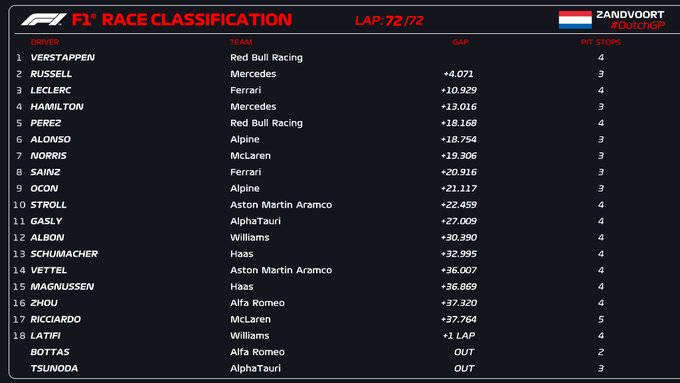