Lewis Hamilton went quickest in FP1 at Singapore for Mercedes with a superb lap late in the session ahead of the championship leader Max Verstappen and Charles Leclerc. It's the second time this year the Brit has led a session.

The top two were ultra competitive, separated by less than a tenth of a second as Leclerc recovered from brake problems early in the session.

Lando Norris struggled in first practice and ended up in P19 as neither he or Daniel Ricciardo broke into the top ten for McLaren.

At the green light a flurry of cars joined the track including the two Alfa Romeo’s of Valtteri Bottas and Zhou Guanyu alongside Ferrari driver Carlos Sainz.

Red Bull driver Verstappen soon left the pit lane to begin gathering data on a weekend where the 25-year-old could clinch his second world title.

Leclerc reported brake issues in the opening stages of first practice at a very humid Marina Bay circuit, the Monagasque gingerly drove back to the pits and went into the garage.

Verstappen immediately hit the ground running in his RB18 setting a 1:47.329 to top the timesheets ahead of his team mate Sergio Perez in second place.

Double world champion Fernando Alonso quickly usurped Verstappen by a fraction with a 1:47.291 as the 23-turn circuit began to rubber in.

George Russell made minor contact with the barrier at Turn 11 after the Mercedes driver made a small mistake. The car remained unscathed and the 24-year-old was able to continue in the session.

The world champion returned to the top of the timesheets with 15 minutes gone. Verstappen began setting sequential laps on the medium tyre as Leclerc sat stranded in the garage with brake issues.

The times continued to tumble as Verstappen set a 1:44.236 on Formula 1’s return to Singapore after three years away.

Leclerc returned to the circuit with 35 minutes remaining on the hard tyre in a bid to make up for lost time in the early stages of the weekend.

Sebastian Vettel broke into the top five for Aston Martin halfway through the one hour session setting a 1:45.354 slotting into fourth place.

With 25 minutes remaining a plethora of drivers began to bolt on the soft tyres, Sergio Perez set a 1:43.839 to go quickest before his effort was comfortably beaten by his team mate Verstappen.

The red flags were brought out with 20 minutes to go after Aston Martin’s Lance Stroll clattered the barrier at Turn 5 after the Canadian suffered from understeer through the turn.

The track was soon cleared five minutes later, Sainz immediately pushed very hard and ran wide at the final turn. The Spaniard avoided the barrier and managed to continue as he sat in third place behind Verstappen and Perez.

Leclerc split the two Red Bulls recovering from a quiet opening to FP1 setting a 1:43.435 with seven minutes left.

Hamilton went quickest with a 1:43.033, marginally quicker than Verstappen as the world champion went down the escape road at Turn 16 but avoided contact with the wall.

Alex Albon set an impressive 24 laps for Williams in the session on his return to Formula 1 after suffering medical complications during appendix surgery. 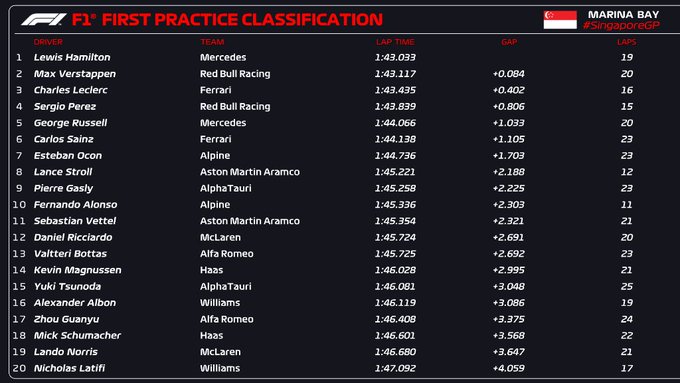