Perez wins a delayed and wet Singapore GP with a 6.8s margin over Charles Leclerc and Carlos Sainz. It's the second win of the year for the Mexican driver, who took the lead at the beginning of a chaotic  race and managed to hold onto it in spite of the many safety cars and VSC.

A good race for McLaren and Aston Martin in the midfield with two double points finishes, while Williams and Alpine suffered from double DNFs.

Mercedes' George Russell, who had failed to make the cut for Q3 yesterday and was supposed to line up in P11 has taken up a new power unit and will instead start from the pit lane.

No matter what the result will be, but it's definitely going to be one to remember for Fernando Alonso, who is taking part in his 350th GP.

The race start was initially set for 14:00 CET, but it was postponed due to heavy raining. The race start procedure ended up starting at 14:05, with the pit lane opening at 14:25 and the formation lap forecasted at 15:05.

Many drivers went out on the inters for the recognition lap, but Sergio Perez mentioned on the radio that the track was still too wet for that compound. At the start, however, everyone was on intermediates.

After the standing start, Perez has taken the lead and Sainz P3 on Hamilton who was hit by him and went a bit wide, while Verstappen moved back to P12 and Alexander Albon spun. The Thai driver, who missed on the Italian GP due to acute appendicitis, is able to rejoin the race behind Russell.

After the first lap, the driver who has completed the most passes is the last winner of the Singapore GP Sebastian Vettel, who has made his way up to P8 with 5 overtakes.

The contact between Sainz and Hamilton had been noted by the stewards, but no further action was taken.

After an unimpressive start, Verstappen is quickly making his way through the midfield. The Championship leader was back in P9 after just three laps. At the front, pole sitter Charles Leclerc has a 1s gap to race leader Sergio Perez.

A black and orange flag was shown to Kevin Magnussen due to front wing damage that had been noticed previously by Verstappen as well.

There was a collision between Guanyu Zhou and Nicholas Latifi at Turn 5, with the former stopping on track and the latter crawling back to the pits with a rear puncture, ensuring the deployment of the safety car.

Williams tried to change Latifi's tyres and front wing to get him back on track, but the damage to his suspension was too much and car number 6 had to be retired.

The Canadian driver gets a 5 places grid lap for the upcoming Japan round for causing a collision with the Chinese driver.

Russell and Bottas made contact as well while fighting for P16, but both escaped it with no significant damage as Russell goes wide to the run-off.

After the restart on lap 10, Verstappen managed to move up to P7 shortly passing both Vettel and Gasly, but was investigated for a Lap 1 contact with Magnussen. No further action was taken.

He finds a stronger match in Alonso, as after ten laps the Spanish driver is still in P6. This comes to an end as on Lap 22 he is forced to retire due to an engine issue. A virtual safety car is issued, and the only driver to take advantage of the cheaper pit stop is Russell, who is the first driver to put on mediums but is sliding around already while getting out of the pit lane.

Race resumes on Lap 23, but only three laps later Albon hits the wall leaving behind his front wing. Yet another virtual safety car is needed to remove the debris. Williams's Sunday was rather unfortunate after Monza's points haul, as he's forced to retire as well.

Just after the restart, Esteban Ocon has an engine failure that leaves him stranded just outside the track. The Frenchman, who said that he had been ignoring a weird sound for a few laps, is the fifth driver to retire after less than 30 laps, issuing a VSC.

On Lap 33 seven times World Champion Lewis Hamilton hit the wall while trying to pass Carlos Sainz. He is able to rejoin the grid behind Norris, but shows evident damage to his front wing.

Many drivers pit for slicks, including Gasly, Bottas and Leclerc who parks the car a bit too late slowing his stop, just as Russell begins to sign good lap times at the back of the grid.

Hamilton stops to change his front wing, rejoining the grid in P9 behind Vettel just as Tsunoda hits the wall issuing a safety car.

The one who will taking advantage of this better opportunity  the most is Norris, who was the only driver still on intermediates in P3, but loses the position on Sainz after the pit. Ricciardo pits for softs, while Russell gets an new set of mediums.

At the restart, Verstappen goes wide while trying to make a move on Norris, locking up his tyres and heading to the run-off. He returns behind Vettel, but has to pit again because his tyres have developed a  massive flat stop.

Not a good moment overall for Red Bull, as Perez is investigated for safety car procedure infringement and mentions on the radio engine drivability issues.

Meanwhile, at the back of the grid Schumacher and Russell came into contact, getting both punctures and having to pit yet again.

With 26 minutes to the end of the race, DRS is finally enabled and Leclerc tries to use it to overtake Perez, while the battle for P3 between former McLaren teammates Sainz and Norris heats up. Verstappen and Hamilton are making their way back up after their mistakes.

The Dutch driver makes quick way of Magnussen, Bottas and Gasly, and on Lap 49 he was catching up with Hamilton.

Perez's possible safety car infringement will be investigated after the race, with both the Mexican driver and Leclerc told to push in case of a 5s penalty, while Russell goes in the pits for yet another tyre change, putting on softs.

Verstappen catches up with Hamilton and Vettel with a couple minutes left to the end of the race. The Red Bull driver overtakes Hamilton after the Brit made an error trying to pass the German. The reigning World Champion also got through on Vettel for P7.

Perez pulled away in the closing laps to win on the road by over 7s in the end from Leclerc. Sainz completed the podium finishers.

McLaren and Aston Martin both had days to remember. 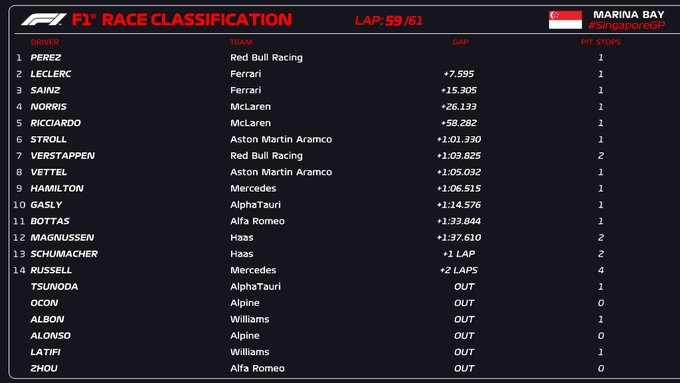