For the second consecutive weekend, the Pirelli tyre test dominated FP2. All teams get prescribed to a certain fuel load and given unmarked tyres to run around on.

Only Yuki Tsunoda, Esteban Ocon, Kevin Magnussen, Alex Albon and George Russell could run on 2022 tyres as they missed FP1 for rookie runners.

Five minutes into the session saw Pierre Gasly’s 1:22.186 put him ahead of the Red Bulls of Verstappen and Perez on the prototype tyres.

Alex Albon popped into P13. The other driver who could have run this year’s tyres was Kevin Magnussen, but he didn’t appear until the second half of the session and had to go to the 2023 prototype tyre.

It was a bad day for Haas overall as the Dane was hit with a 5-place grid penalty for another new ICE following Fittipaldi’s problem in FP1.

A red flag was required just over 30 minutes into the session as Charles Leclerc lost the rear of the car into turn 7 and hit the barrier. The rear of his car was heavily damaged, and his FP2 was done.

Charles hits the barriers hard at the exit of Turn 7

He's OK and out of the car #MexicoGP #F1 pic.twitter.com/8xs4k7KUvx

The top 10 remained the same until the chequered flag as everyone pumped in laps on the 2023 prototype tyres.

Right at the end of FP2, Zhou Guanyu stopped in the final sector as more unreliability problems struck the Chinese driver.

The FP2 session will not be resumed, with less than a minute remaining on the clock #MexicoGP #F1 pic.twitter.com/YCrJJn6i11 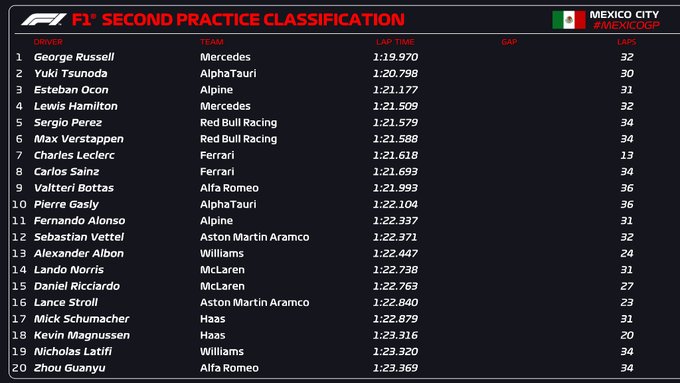