When the five lights went out, Vettel slipstreamed Valtteri Bottas down towards turn one to take 2nd place from the Finn. Hamilton held the lead with Raikkonen, Verstappen and Ricciardo rounding out the top 6.

Back in the pack, there was absolute carnage. Romain Grosjean dropped it at turn three and collected Hulkenberg and Gasly when the Frenchman came back across the track. All three drivers retired from the race as all of the cars had too much damage to continue.

Charles Leclerc had a wonderful start and moved up from 14th on the grid to 9th in the Sauber – but Lance Stroll was the biggest winner as he vaulted up from 18th to 12th in the Williams as he made another superb start in 2018.

Unsurprisingly the Safety Car was called for following the first lap shunts. Hartley and Sirotkin decided to pit for new tyres.

On the restart, Fernando Alonso made a stunning move around the outside of Esteban Ocon to take P10 from the Force India man as the top 6 guys remained in the same order.

Stoffel Vandoorne was awarded a 5-second time penalty after the Belgian failed to stay to left the bollard on the exit of turn two following a mistake at turn one and missing the corner.

Ferrari brought in Sebastian Vettel at the end of lap 17 and fitted a set of the medium tyres. That moved Bottas and Raikkonen up to 2nd and 3rd. Bottas pitted on lap 19 – but a slow stop cost him the chance to jump the German who was behind Kevin Magnussen throughout that lap.

Kimi Raikkonen was running 2nd in the Ferrari when he suddenly slowed – the Finn lost power and retired from the Grand Prix. Hamilton pitted on the same lap as the Ferrari driver came in and rejoined between the Red Bulls who hadn't stopped – but he was well ahead of his main rivals, Sebastian Vettel and Valtteri Bottas.

There was finally some good racing towards the halfway point as Sainz and Ericsson went head to head as the Sauber driver nicely held off the Spaniard in a fierce battle in turns one and two.

Eventually, Verstappen and Ricciardo pitted from P1 and P3 on laps 34 and 35. The Dutchman rejoined in P4 and the Australian in P5. Hamilton, Vettel, Bottas were back in the top 3 spots.

Esteban Ocon, who had a terrible pitstop, would then fall out of the race on lap 39 after smoke was coming out of the back of the Force India. Ferrari decided to pit under VSC conditions – but a very slow stop saw Vettel drop behind Verstappen to be P4 following the resumption of the race. He wasn't helped by the fact he was held because of Perez pitting as well.

There was a heart-stopping moment for the young Dutchman when it ended as the Dutchman clipped the back of the Williams and sustained front wing damage. Fernando Alonso in the McLaren caught Charles Leclerc napping to take P8 when the VSC ended. The order was Hamilton, Bottas, Verstappen, Vettel, Ricciardo, Magnussen, Sainz, Alonso, Leclerc and Perez.

Stoffel Vandoorne became the sixth driver to drop out of the race on lap 46 from P13. The Belgian reported he ''lost drive.''

Sergio Perez made a nice move around the outside of Leclerc heading down to T1 to take 9th off him in the closing stages of the Grand Prix – but the final 20 laps were mostly a procession with a lack of close battles and overtaking.

Lewis Hamilton took the 64th win of his career in a dominant display from the Mercedes team. Bottas and Verstappen completed the podium finishers. Vettel, Ricciardo, Magnussen, Sainz, Alonso, Perez and Leclerc rounded out the points scorers. 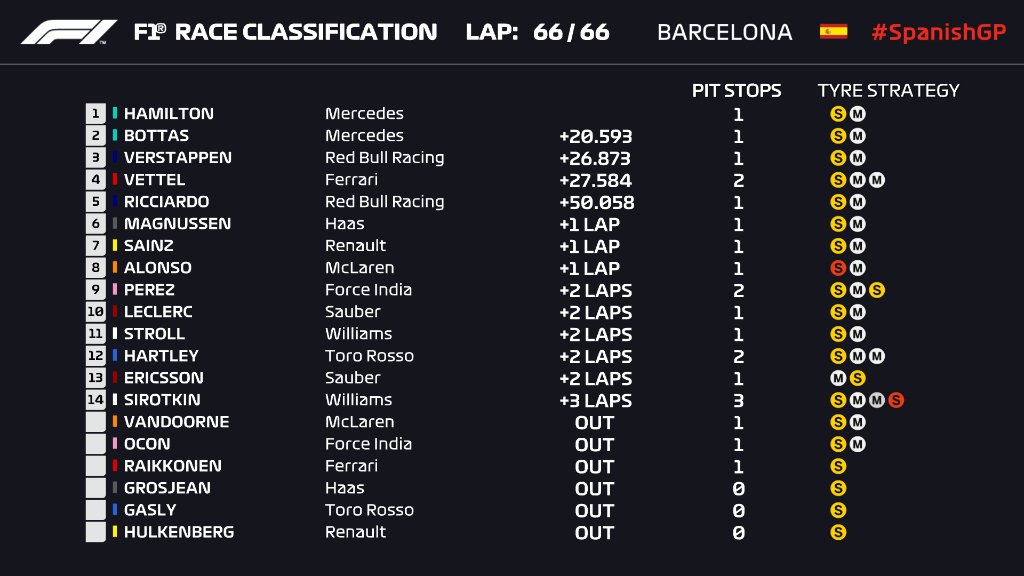