Under nice skies at the Monte Carlo circuit, the action got underway and the teams were quickly out on the circuit.

The first time of the session was posted by Valtteri Bottas in his Mercedes – the Finn clocked a 1:17.299 on the ultrasofts. However, that was soon by Sirotkin as the Mercedes' and the Russian in the Williams traded quickest times early in the session. Hamilton would go fastest on a 1:14.749.

Not long after, the Red Bulls came out to play and they were fast straight away. Daniel Ricciardo went quickest after posting a 1:14.103 on the hypersofts. The remainder of the session would be a battle between Verstappen and Ricciardo to see who would end up on top of the pile.

They consistently traded times and lowered the benchmark as the session went on. Ultimately, the Australian pipped his Dutch stablemate to P1 by 0.154s. Ricciardo's time would have put him on pole for last year's race.

Behind the dominant Red Bulls, Lewis Hamilton, Sebastian Vettel and Kimi Raikkonen rounded out the top 5. Both Ferrari's were over 0.9 behind Ricciardo.

Not surprisingly, there were some incidents throughout the session. Sirotkin hit the wall on the right-hand side of the start-finish straight, which resulted in a puncture for the Russian driver. Grosjean grazed the wall at tabac and his session was compromised by floor damage. Verstappen went down the run-off at T1 and reversed back on to the circuit - he was investigated but cleared by the stewards.

Alonso had a brake sensor problem – and down at Haas, Kevin Magnussen's car was stuck in the garage thanks to a suspected injector issue. They only completed 16 and 7 laps respectively. 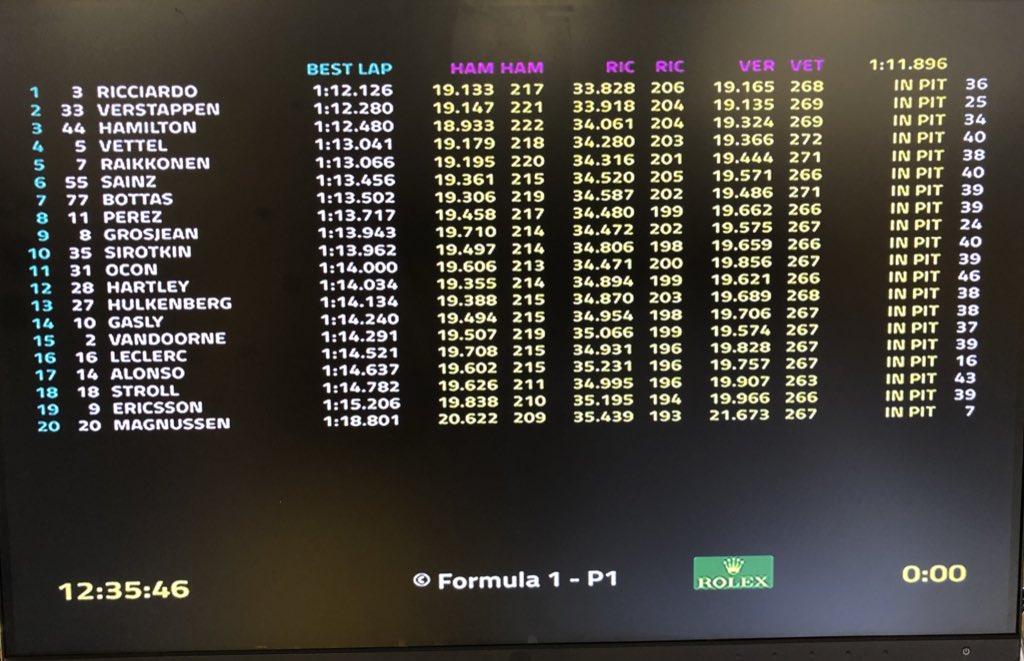