This event was always going to be a case of damage limitation for Lewis Hamilton and so it proved. The championship leader did a terrific job on the streets of Monte Carlo. In the third fastest car in qualifying, he managed to put himself between the Ferrari drivers of Vettel and Raikkonen to bag 3rd on the grid. A solid drive in the race meant he maintained his position and grabbed the final podium spot. Crucially, he only lost three points to Vettel in the fight for the championship.

Qualifying is the key part of the Monaco weekend and it would prove to be very costly for Valtteri Bottas. The Finnish driver lacked the raw one lap pace all weekend and ended up two places and two tenths behind Lewis Hamilton. He stayed in P5 all day – but he had strong pace on supersofts (vs the top 4 on hypersofts) in the second part of the race after losing up to 3 seconds a lap late in the first stint on hypersofts. Solid points on an ok weekend.

After a nightmare in Spain, Sebastian Vettel needed a strong weekend and to gain points on Lewis Hamilton on a track where Ferrari was expected to be quicker than Mercedes. He did exactly that. A superb final lap in Q3 elevated him to the front row ahead of his British rival. That's where he stayed in the race. Even with Ricciardo down on power in his Red Bull, the German could never get close enough to have a look. Nonetheless, a good haul of points and he closed the gap by three to the championship leader.

Kimi Raikkonen's brilliant early season form has tailed off a small bit. Just like it was in Spain, he was 0.2-0.3s down on Vettel over the course of the meeting. He'll have been disappointed to narrowly miss out on beating Hamilton in qualifying – the gap was only 0.034s. In the race, it was like the other front-runners. No chances to overtake and stayed where he started on the grid. He collected valuable points after his DNF at the Spanish Grand Prix.

What a weekend for Daniel Ricciardo. It quickly became apparent from Thursday's running that the Australian was in a battle with his stablemate for the victory. He led every single practice session and all three segments of the qualifying hour. He took his second career pole – and both have come at Monaco. Even with a power issue (down 160BHP) and only having six gears from lap 18 onwards, he held on to take a fantastic and well-deserved win on the streets of Monte Carlo. It was a magnificent second win of the season in very difficult circumstances.

Max Verstappen's wretched season continues. The Dutch driver was going toe-to-toe with Ricciardo all weekend – but then a very costly crash in the dying moments of FP3 saw the youngster miss qualifying and lose out on the chance to fight for the pole and win. He staged a good recovery in the race with some nice overtakes to salvage a couple of points in P9. However, this was a Grand Prix where Red Bull had the fastest car and he threw away an almost certain P1 or P2 finish. He'll be very disappointed.

This was by far and away Esteban Ocon's strongest weekend of the year to date. On a track where you would have expected Force India to struggle, the Frenchman was exceptional. He qualified a wonderful P6 and maintained that position for the whole Grand Prix. He even got close to Bottas and Raikkonen in the closing stages of the Grand Prix thanks to six laps fresher tyres and the slow pace at the front – although he had a big scare with a brake-by-wire failure in the last couple of laps. He showed his class on one of the toughest tracks on the calendar.

It was ultimately a disappointing event for Sergio Perez. It was nip and tuck with Ocon throughout the sessions – but he was narrowly beaten by a tenth and two places by the Frenchman in qualifying. He started 8th and stayed there in the opening stint of the race. Unfortunately for Checo, a very slow pitstop (right rear not coming off) ruined his Sunday completely and left buried down the order. It cost him a likely top 10 finish.

Monaco was by far and away Sergey Sirotkin's optimal weekend in F1 so far. The Russian in the Williams did an amazing job and battered Lance Stroll in Q1 by over 0.6s. He ended up 13th on the grid and clearly outperformed his package. Unfortunately, that would be as good as it would get. A 10-second stop-go penalty because Williams didn't have all four tyres on the car before the permitted time ahead of the formation lap killed his chances of a good result. It left him at the back and didn't make any progress after serving the penalty. A huge shame following a very strong Thursday and Saturday.

Lance Stroll had an event that he'll want to forget very quickly. He lacked speed all weekend compared to Sirotkin and got bumped out in Q1. Contact with Ericsson's Sauber on the opening tour eventually resulted in a puncture on lap 9. Amazingly, it would occur later on in the race once again. A terribly difficult weekend for the young Canadian and he was last of the 17 drivers who completed the race. He'll be hoping to have a better weekend at his home race in Montreal.

For the first time since 2016, Nico Hulkenberg was beaten by a team-mate in pure pace in qualifying. The German failed to make the final part of it as Carlos Sainz dragged his car up to 8th. However, roles would reverse in the Grand Prix. From P11, Hulkenberg went long on his first set of tyres and did an excellent job of managing them while delivering good lap times. Following his stop, he came out a few seconds Sainz – but team orders saw him quickly move up to 8th and that's where he stayed, despite his best efforts to have a go at Gasly. An excellent recovery from a poor enough qualifying effort.

Another weekend and another race where Carlos Sainz finishes the Grand Prix behind his German stablemate. It looked like Sainz had got the upper hand thanks to a terrific effort on Saturday to eek his way into Q3. That would be as good as it would get for the Spanish driver, though. A huge amount of graining led to a complete lack of pace in the second stint and he got swallowed up by Gasly, Hulkenberg and Verstappen. In the closing stages, he was 2-4 seconds a lap slower than the guys around him and was extremely fortunate to keep his 10th place. A tough Sunday in a tricky year for Sainz so far.

Following on from some tough races after that amazing P4 in Bahrain, Pierre Gasly was one of the stars at the most glamorous races of the year. It seemed his stablemate Hartley had a small edge over him before qualifying, but the young Frenchman turned the tables in qualifying. Stonking laps in Q1 and Q2 got the Frenchman into the last segment of qualifying and lined up P10 on the grid. Unlike everyone else in the top 10, Gasly went very long in the opening stint on the hypersoft tyre and it worked brilliantly thanks to some quick laps. He overcut Carlos Sainz, benefitted from the retirement of Alonso and Perez's terrible stop to finish 7th. Pierre resisted Hulkenberg and Verstappen on much fresher tyres at the end in what was probably his best race in the category so far.

Brendon Hartley's 2018 has been a season of woe and that didn't change in Monaco. The New Zealander seemed to have found the sweet spot with his car in practice and seemed set to challenge for a place in Q3. Yet, that never materialised when it came to the crunch. Traffic and yellow flags left the Kiwi stranded in the dropout zone in Q1. From 15th on the grid he moved up to P11 – but a late-race collision with Leclerc, who had lost his brakes, saw him have a damaged rear wing and was forced to retire. It was another race where he struggled for pace and had a queue of cars behind him before his DNF.

An event where Haas had no pace. Kevin Magnussen missed out on valuable track time in FP1 because of an injector issue and it showed as he massively struggled in qualifying. The Dane was the slowest of the 19 runners who took part in it. Race day was slightly better, he overtook team-mate Grosjean on the opening lap and finished well ahead of him. A couple of late retirements meant K-Mag got a 13th place finish. He'll be wanting to be back in the midfield pack in Montreal.

Much like Verstappen, Romain Grosjean's forgetful season continued at the weekend. To the Frenchman's credit, he produced a really good lap in Q1 to make the second segment of qualifying – but a penalty left him P18 on the grid. The race turned into a nightmare. He got mugged by Magnussen and Verstappen on the opening tour to leave him dead last. A complete lack of pace from there vs his team-mate and the rest of the field left him very much on his own on his way to a lowly 15th place finish and third last of the cars who reached the chequered flag.

2018 continues to be a season of toil for Stoffel Vandoorne. The Belgian showed really encouraging pace throughout free practice and looked set to challenge Alonso in qualifying. Yet, he only managed P12 in qualifying and ended up five places behind the Spaniard. A complete lack of race pace saw him fall away from the midfield battle and even Alonso came out in front of him following his first stop early in the race. The pressure continues to mount for the Belgian driver.

For the first time in 2018, Fernando Alonso didn't score any points. After struggling to find a good set-up during the practice sessions, the double world champion turned things around in qualifying and put his car 7th on the grid. As always, the Spaniard was fast and consistent and looked set for P7 – but car gremlins saw his race end at the beginning of lap 53. A disappointing weekend once again for McLaren.

Following a strong start to the year, the last three events have been tougher for Marcus Ericsson. Stablemate Leclerc had a clear speed advantage throughout the weekend and the Swedish driver saw his qualifying end in the first part of it. Nonetheless, he produced a very strong showing in the Grand Prix itself and had some really good pace. He was nicely tracking his team-mate before Leclerc's brakes failed. Ericsson caught Sainz in the final laps but there was no way to pass. A good Sunday after an average run of form recently.

At his home Grand Prix for the first time, Charles Leclerc performed well. The man from Monaco delivered a mega qualifying performance to make Q2 – 0.4s ahead of Ericsson. He started 14th and ran in 12th for most of the second stint right behind Hartley – a bad in lap cost him a place to the Kiwi and that was his weakest part of the weekend. Sadly, a brake failure for the young star saw him clout the back of Hartley's STR13 and both drivers were out of the race late on. A bitter end to a strong event overall. 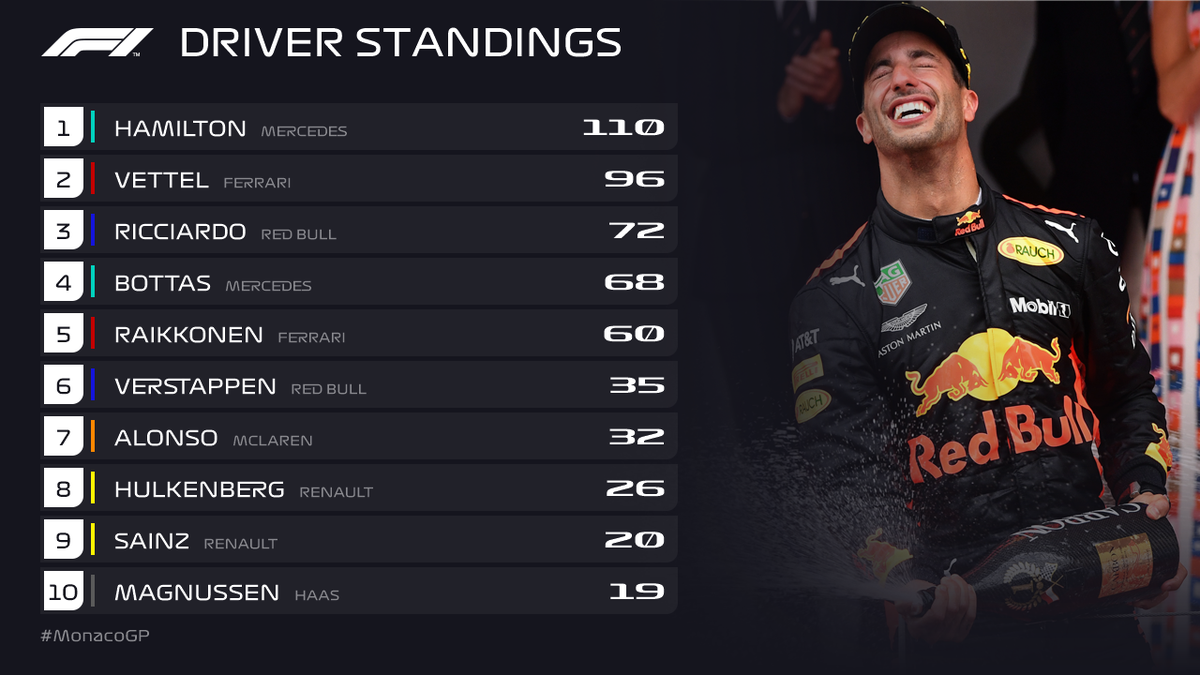