At the start of qualifying, Romain Grosjean's Haas had a lot of smoke coming out of the back of it as he exited the garage and stopped the car in the pitlane. It was session over straight away for the Frenchman.

The first lap time of qualifying was posted by Charles Leclerc on a 1:14.543. Sirotkin beat that by 0.3 in the Williams to be P1 in the very early stages.

Marcus Ericsson's qualifying ended early in Q1 as well thanks to contact with the outside wall of T9 – damaging his car exactly like Vandoorne at the same spot yesterday.

The McLaren of Fernando Alonso was in the drop zone with less than a minute to go, but a last gasp effort saw him make Q2 in P14, just ahead of team-mate Stoffel Vandoorne.

Gasly (who was forced to revert to an older power unit before qualifying), Stroll, Sirotkin, Ericsson and Grosjean were the five drivers knocked out in the opening segment.

Raikkonen posted the first attempt of Q2 – a 1:11.620. That was quickly beaten by Vettel and Bottas. The Finn in the Mercedes narrowly beat Vettel's time by 0.010. After setting a purple S1 and S2, Lewis Hamilton locked up at the hairpin and lost over half a second in the final sector to slot into P4. All 4 of them chose the ultrasoft compound for Q2.

Verstappen and Ricciardo both went for the hypersoft and the Dutchman got in the mix. Verstappen went quickest, Ricciardo closely behind Hamilton in P6. On the second runs, Ricciardo pipped his team-mate to the top spot in the second part of qualifying. Bottas, Vettel, Raikkonen, Hamilton and Hamilton rounded out the top 6.

Hulkenberg, Sainz, Ocon and Perez were the other drivers to make it into Q3.

Magnussen, Hartley, the brilliant Leclerc, Alonso and Vandoorne were the five drivers who were eliminated in Q2.

The opening benchmark of the final qualifying segment was set by Hamilton in the Mercedes – the Brit produced. a 1:11.227. Bottas and Raikkonen quickly beat that time set by Hamilton.

However, Sebastian Vettel drove a sensational lap to go quickest after the first runs on a 1:10.776. Bottas, Raikkonen, Verstappen, Hamilton and Ricciardo would complete the top 6 following the opening attempts.

On the second efforts, Vettel improved by 0.012s to cement pole position from Valtteri Bottas. A superb final run from Verstappen got him up to 3rd ahead of Hamilton, Raikkonen and Ricciardo. In the battle between the Renault's and Force India's, Hulkenberg won out in front of Ocon, Sainz and Perez. 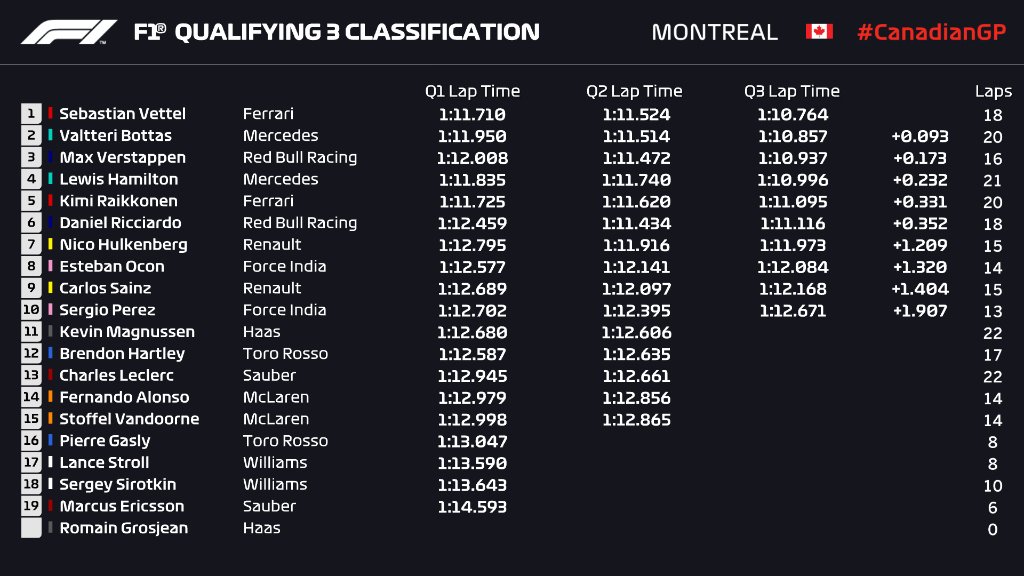