So far we've seen 4 different race winners in the last 4 races and as the fight of keeping, losing and gaining the drivers' championship points between the rivals, Sebastian Vettel and Lewis Hamilton are still on the hit talk in F1, especially through the triple-header, it looks Vettel is beating Hamilton by topping the second Formula 1 free practice session ahead of the British Grand Prix at Silverstone, while Max Verstappen hit his RB14 on the wall (right-rear corner) just on his first flying lap.

However, it showed that Mercedes were unexpectedly struggling for pace on Silverstone track unlike this morning as Vettel was 0.187 seconds ahead of Hamilton who was on soft compounds setting a 1m27.739s to secure second place, soon fowllowed by his teammate Valtteri Bottas who was first of the Mercedes drivers to set a time on softs setting a 1m27.909s to secure the third place.

While Kimi Raikkonen scored the 4th ahead of the only Red Bull car, Daniel Ricciardo, who was 0.856s off the pace. Next, McLaren driver Fernando Alonso was unexpectedly competitive this afternoon setting the sixth fastest car just 1.754s behind the leader, unlike this morning.

On the other hand, Renault improved it performances as Nico Hulkenberg clocked the seventh fastest time, just half-a-tenth behind Alonso and ahead of Force India duo Esteban Ocon and Sergio Perez. While Nico's teammate, Sainz putting himself 11th. Haas driver Kevin Magnussen was only 12th, Dane's team-mate Romain Grosjean did not take part in the session after crashing heavily in the morning's first practice session and damaging his chassis.

Both Williams Lance Stroll and Sergey Sirotkin were 15th and 16th, ahead of the McLaren of Stoffel Vandoorne and Brendon Hartley's Toro Rosso, anyway, all teams to set the mode of (Race Simulation) particularly in the last part of the session until the session was finished peacfully.

Here is the complete classifications of the F1 Free Practice 2 session. 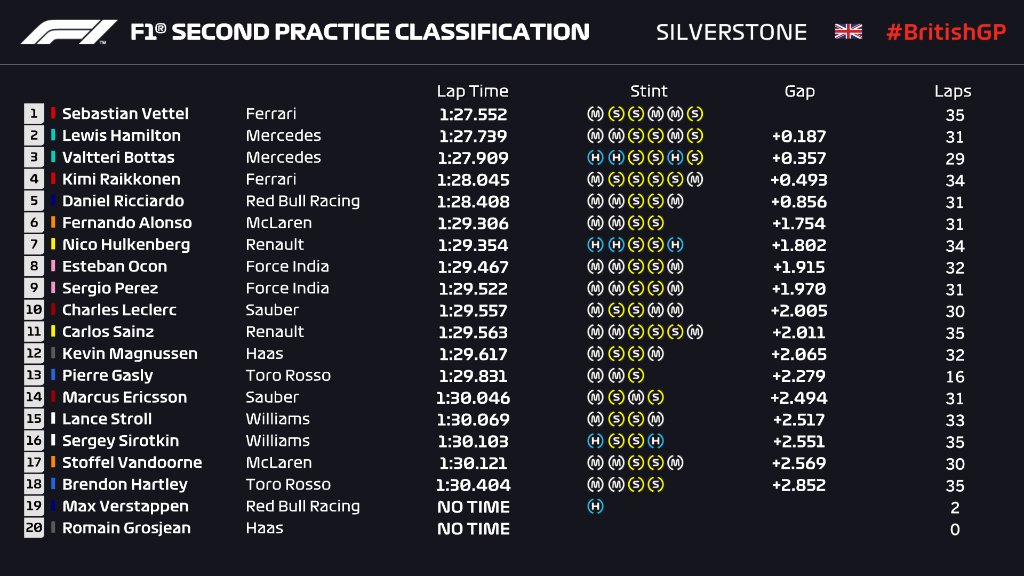