Sebastian Vettel stayed on top before qualifying for the Italian Grand Prix at Monza. However, Hamilton and Raikkonen are close behind him.

Following his terrifying shunt in the early stages FP2 yesterday, Marcus Ericsson left the garage first in FP3 as he tried to make up for some of the lost running.

Fernando Alonso posted the first time of the session on a 1:25.734 using the soft compound tyre. Vandoorne then beat his stablemates time by logging a 1:25.097. Alonso immediately responded with a 1:24.321 to take back top spot as McLaren ran 1-2 in the opening stages as the others waited in the garage.

Kimi Raikkonen was the first of the big six to come out and went fastest by 2.419s over Alonso – the Finn logged a 1:21.484. Raikkonen lowered his own benchmark to a 1:21.399 before Lewis Hamilton pipped the Finn by 0.007s. Verstappen, Vettel, Bottas and Ricciardo completed the top 6 after the first runs.

Perez, Ocon, Grosjean and Sainz were the other four drivers in the top 10 just past the halfway stage. Nico Hulkenberg’s session came to an early end when the German was forced to pit because his DRS was jammed open.

Perez, Gasly, Sainz, Sirotkin, Stroll, Ericsson, Alonso, Vandoorne, Hulkenberg and Hartley filled the ten spots second of the half of the field. 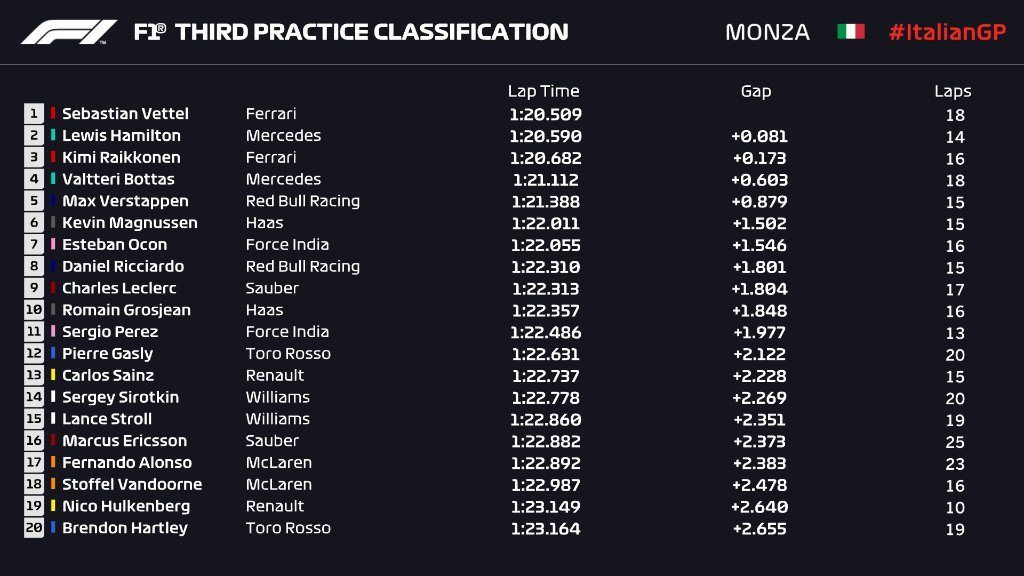