Kimi Raikkonen clocked the opening time of the session in his Ferrari on a 1:40.012 on hypersofts. Soon after, team-mate Sebastian Vettel beat that time by a mere 0.004s as both Ferraris immediately set quick lap times. They remained 1-2 at the halfway stage of the session.

Behind the Ferrari pair at the 30-minute mark, Ocon, Perez, Alonso, Bottas, Grosjean, Gasly, Vandoorne and Magnussen completed the top 10. The Mercedes’ and Red Bulls both ran on the soft tyres for their opening runs which left Hamilton down in 15th following his first runs. Verstappen posted a good time on the yellow marked tyre to jump from last to 3rd after spending the opening half of the session in the garage.

Vettel returned to the track for his qualifying simulations and smashed the official track record and the unofficial record set by Raikkonen in FP2 yesterday. A 1:38.054 was a full 0.6s faster than Raikkonen’s benchmark from Friday. Kimi tried to respond, but the Finn ended up 0.362s down on his Ferrari stablemates time.

The Mercedes’ had a go a few minutes later, but they couldn’t beat either Ferrari. Despite Hamilton doing a purple S2 and Bottas a purple S3 at the time, they both ended up just over half a second off Vettel’s rapid lap in P3 and P4.

Ricciardo and Verstappen did their qualifying sims late in the sessions but both of them finished up over a second off Vettel in P5 and P6. The young Dutchman was consistently unhappy with engine braking and his Renault engine throughout FP3.

In the midfield, Grosjean led the two Racing Point Force Indias of Ocon and Perez. Fernando Alonso rounded out the top 10 in his McLaren. 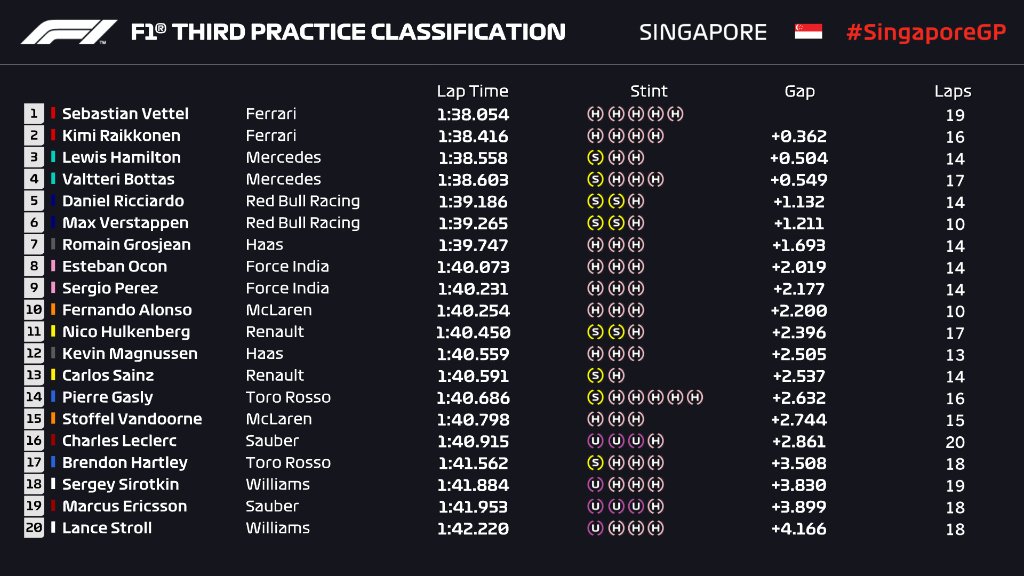