Once again, Lando Norris stepped into the McLaren in place of Stoffel Vandoorne for FP1 ahead of his full-time drive with the team next year.

Eventually, the Mercedes’ and Ferraris appeared and soon got in the mix. Valtteri Bottas went top on the softs by logging a 1:29.842. Vettel on supersofts (+0.097s) and Hamilton using mediums (+0.173s) closely followed the Finn.

Ricciardo and Verstappen completed the top 5 on the soft compound, with Raikkonen P6 on the red striped tyres like his stablemate. +0.294s covered the top three teams after the first tuns.

Grosjean, Gasly, Leclerc and Ocon rounded out the top 10 at the halfway stage of opening practice.

On the second runs, Hamilton switched to the soft tyres and fired in a 1:28.691 to be the P1 in FP1. Bottas (mediums), Ricciardo, Raikkonen, Vettel and Verstappen (all on supersofts) completed the big six. Only the Finn in the Mercedes. could get within half a second of Hamilton’s time.

Ocon was top dog in the midfield battle ahead of Grosjean, Leclerc and Ericsson.

There were a number of off-track excursions during the 90 minutes. Alonso, Gasly, Perez and both Red Bull drivers had spins or went off the circuit as once again the Suzuka circuit proved how difficult of a challenge it is.

Hamilton and Gasly almost had a tangle as the Frenchman was travelling slowly on the racing line before the final chicane. Luckily, the British driver managed to avoid him and no damage would be done. 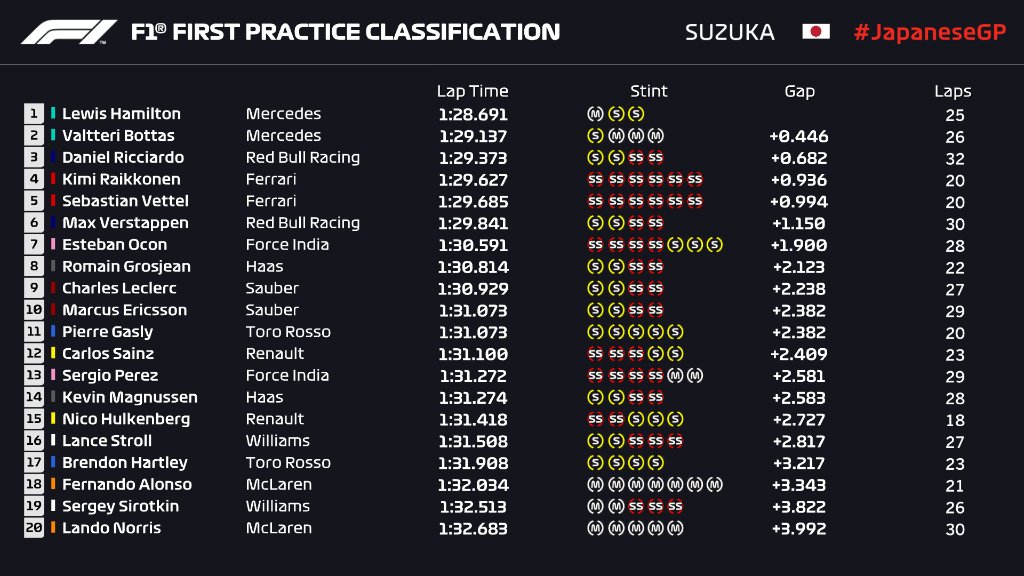