A 1:32.540 by Charles Leclerc in the Sauber was the first time posted in FP2 on the medium tyres. Stablemate Marcus Ericsson beat that almost instantly by nearly 0.7s as Sauber went 1st and 2nd in the very early stages.

The Ferraris came out early and Vettel went top by a comfortable 6 tenths of a second from Kimi Raikkonen. Grosjean in the Haas was 3rd ten minutes into the session.

However, Vettel’s time at the top came to an end when Lewis Hamilton comfortably beat the German’s benchmark by almost half a second. Bottas slotted into 3rd ahead of Raikkonen – both Finns trailed their teammates by over half a second following the first runs. All four of them were using the soft compound tyre.

Vettel was the first of the big six to do a qualifying simulation. While he improved his time and set a purple S1 and S2, he remained 2nd, 0.139s behind Hamilton. Ricciardo popped up to P3, trailing Hamilton by 0.6s. Yet, Verstappen took P3 from his Australian stablemate by a couple of tenths.

Bottas had set a purple first sector on his opening attempt on the quali sims, but ran wide at Degner 2 and was forced to abort the lap.

Hamilton came out and demolished his own best time by a massive 0.6s on the supersofts to cement his P1 position. Bottas got things together to climb up to 2nd, 0.461 behind his British stablemate. Vettel, Verstappen, Raikkonen and Ricciardo completed the big 6 following the qualifying runs. The German in the Ferrari was a massive 8 tenths behind his title rival.

Just like this morning’s session, Esteban Ocon won the battle of the best of the rest and ended up P7. Grosjean, Ericsson and Hartley filled the other remaining spots in the top 10.

Perez, Hartley, Gasly, Sainz, Leclerc, Magnussen, Alonso, Sirotkin, Stroll and Vandoorne completed the second half of the field. Gasly was stuck in the garage for most of the session due to a car issue with his Toro Rosso.

On the race simulations, Hamilton continued to maintain a very solid advantage over Sebastian Vettel and all the signs point to a great weekend for the Brit and his team. 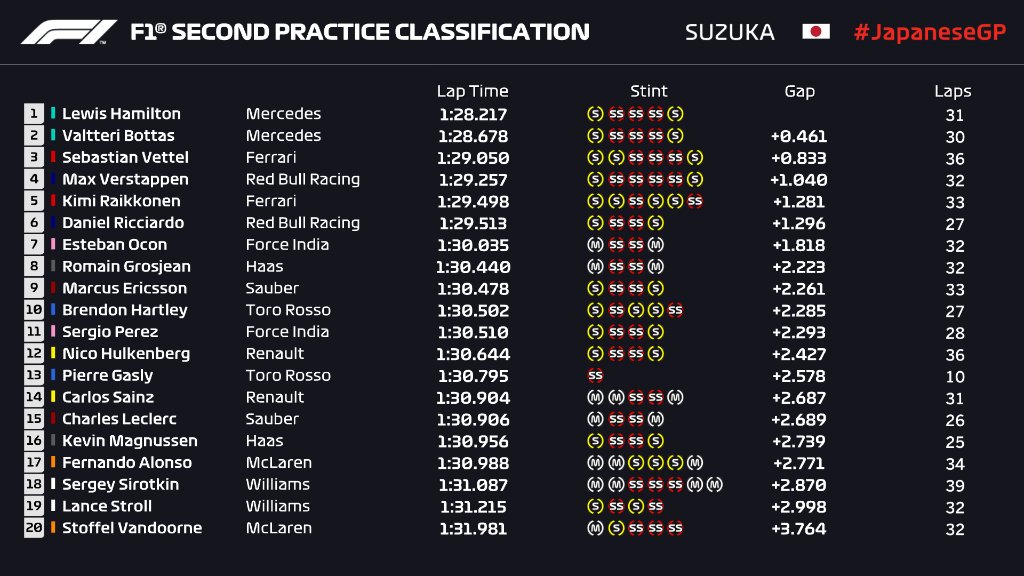