Nico Hulkenberg logged the opening time of FP3 on a 1:32.563 in the Renault using the soft compound. Moments later, Raikkonen destroyed that time by 2.5s to take the top spot. Kimi’s 1:30.054 would remain the fastest time for most of the session.

Sebastian Vettel was 2nd, just over a tenth behind his teammate. Valtteri Bottas was over half a second behind his fellow Finns benchmark. The Ferraris and Bottas had the supersofts fitted on. Verstappen and Ricciardo were P4 and P5 using the soft tyre.

Lewis Hamilton looked set to go fastest as he was 0.4s up on Raikkonen’s time after the middle sector, but a lock-up into the final chicane saw him miss it. It left him down in P20 at that stage.

Leclerc led midfield scrap following the first runs in P6. Sainz, Grosjean, Ericsson and Hulkenberg completed the drivers in the top half of the field.

Rain started to fall a bit heavier around 15 minutes into FP3 and it forced all the drivers to return to the pits. Eventually, it stopped and the drivers ventured back on to the circuit with around 20 minutes to go – and improvements came.

Vettel moved up to top spot by posting a 1:29.715, 0.3s in front of Raikkonen. However, Hamilton beat the Ferrari pair to end the session quickest. The British driver logged a 1:29.599 to beat Vettel by just over a tenth. Verstappen, Bottas and Ricciardo completed the big six.

Once again, Esteban Ocon finished up best of the rest in front of Perez, Sainz and Magnussen.

Grosjean, Leclerc, Hartley, Stroll, Hulkenberg, Ericsson, Alonso, Sirotkin, Vandoorne and Gasly were the drivers in the second half of the field.

The session ended prematurely as Nico Hulkenberg crashed at turn 5. The driver was fine, the car not so much. It brought out the red flags 2 minutes before the end and it meant nobody could improve in the final moments. 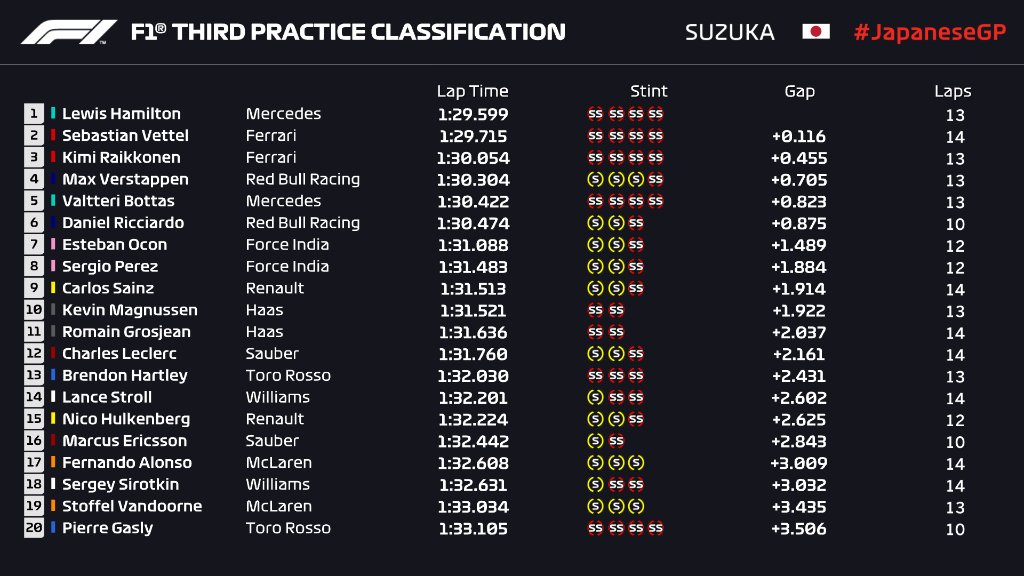