When the five red lights went out, Hamilton maintained his lead from Bottas.

Heading into the final chicane at the end of the opening lap, Verstappen went deep into the chicane and rejoined alongside Raikkonen and pushed him off the track. Verstappen was awarded a 5-second time penalty for the incident.

Sebastian Vettel, who had already dispensed of the Toro Rossos and Grosjean, took advantage and moved up to 4th after the opening lap.

Like Verstappen, Lance Stroll and Fernando Alonso received 5-second penalties. Stroll left Alonso no room heading into the final chicane on the first lap – but the Spaniard went straight over the grass as he went down the run-off, gained an advantage and got penalised.

A safety car was deployed because of debris following a puncture for Kevin Magnussen. The Dane made a very late move on Charles Leclerc and they made heavy contact as the driver from Monaco ran into the back of the Haas. Magnussen ultimately retired at the end of lap 8.

Hamilton led Bottas, Verstappen, Vettel and Raikkonen before the race restarted. On the resumption, Ericsson hit the rear of Leclerc’s car. Luckily for the Sauber pair, they could continue.

More drama would follow as Sebastian Vettel tried a desperate move on Verstappen into the first part of Spoon. They made sizeable contact and the Ferrari driver spun. Verstappen continued in P3 as the German dropped to the back of the field.

Raikkonen boxed from P4 at the end of lap 17 and came out in a lot of traffic. It allowed Verstappen to serve his penalty four laps later without losing a place. Daniel Ricciardo showed tremendous pace on the soft tyre to overcut the Finn and take 4th place when he pitted on lap 20.

The order following the first stops was Hamilton, Bottas, Verstappen, Ricciardo and Raikkonen.

Sebastian Vettel, who went on a long first stint, climbed up the field when he switched to the soft tyres and made a number of moves to leap back up to P6.

A VSC was deployed on lap 40 thanks to Charles Leclerc pulling off the circuit because of an issue with his Sauber.

When the VSC ended, Sergio Perez made a beautiful move around the outside of Romain Grosjean into the final chicane to take 7th place in the battle for best of the rest.

Lewis Hamilton cruised to victory at Suzuka ahead of Bottas and Verstappen. Ricciardo, Raikkonen, Vettel, Perez, Grosjean, Ocon and Sainz completed the points scorers. The Spaniard in the Renault made a late overtake on Gasly to snatch the final point. 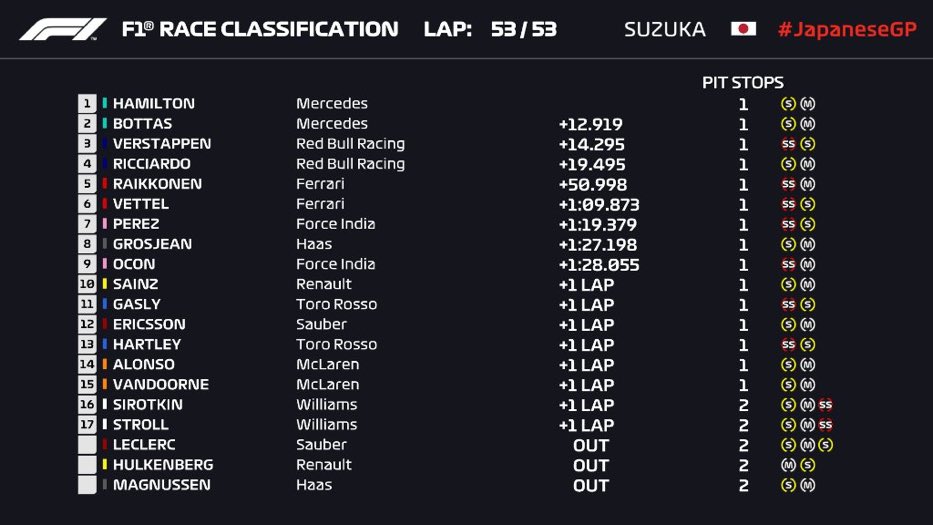