Nicolas Latifi, Lando Norris and Antonio Giovinazzi all made appearances in FP1 in place of Perez, Alonso and Ericsson respectively.

It was also confirmed that Daniel Ricciardo would take a grid penalty for Sunday’s race after fitting a new turbocharger. It’s his sixth of the season.

Kimi Raikkonen posted the first time of the weekend with a 1:20.666 in his Ferrari. McLaren’s Lando Norris smashed that a few minutes later by pumping in a 1:13.312 to go fastest and give us the first representative time of the event.

The young Brit then lowered his benchmark to a 1:11.938 on his third lap to extend his gap at the top in the early stages of FP1.

Ricciardo was the first of the big guns to set a meaningful lap time and he immediately went to the head of the field thanks to a 1:10.139 on the supersoft compound.

At the 30-minute mark, a mere 0.055s covered the top 4 of Raikkonen, Verstappen, Ricciardo and Vettel. The Red Bull was showing good speed in the middle sector against the Ferraris.

Hamilton took over at the top by banging in a 1:09.423 and led at the midway point of the session. Verstappen, Bottas, Ricciardo, Vettel, Raikkonen, Magnussen, Grosjean, Leclerc and Ocon rounded out the top 10.

Hulkenberg, Norris, Sainz, Stroll, Gasly, Siroktin, Giovinazzi, Hartley, Latifi and Vandoorne filled the second half of the field before the next runs began.

Grosjean made the first sizeable improvement and the Haas driver leapt up to P5.

Hamilton went even quicker and pumped in a 1:09.107 to extend his lead at the top. However, Max Verstappen beat that moments later and grabbed P1 from his British rival by 0.096s on the supersofts.

Verstappen’s benchmark would remain unbeaten as the young Dutchman topped the times in the opening session of the weekend. Vettel slotted into 2nd, followed by Hamilton. The three of them were separated by only 0.096s. Ricciardo, Raikkonen (the only one of the big six on softs) and Bottas completed the top 6.

The Haas’ of Grosjean and Magnussen led the best of the rest battle in P7 and P8; Leclerc and Ocon rounded out the top 10. 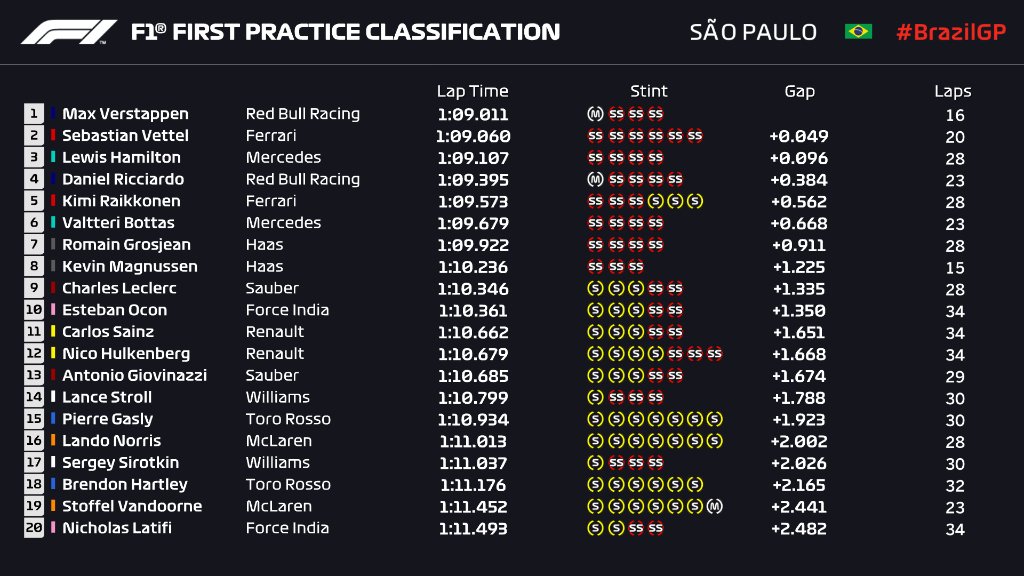