At the start, Hamilton got a superb launch and led away from Bottas, Vettel, Raikkonen, Ricciardo and Leclerc.

Verstappen got a decent start but lost a load of positions on the run down to T1 as the Dutchman seemed to have a lack of power. He fell to 9th.

There was a scary crash at turn 9 involving Hulkenberg and Grosjean. The Renault and Haas were battling hard and Grosjean’s left front clipped the right rear of the German’s car and he rolled multiple times. Luckily, Hulkenberg got out of the car with no injuries. No penalties got handed out as the stewards decided it was a racing incident. 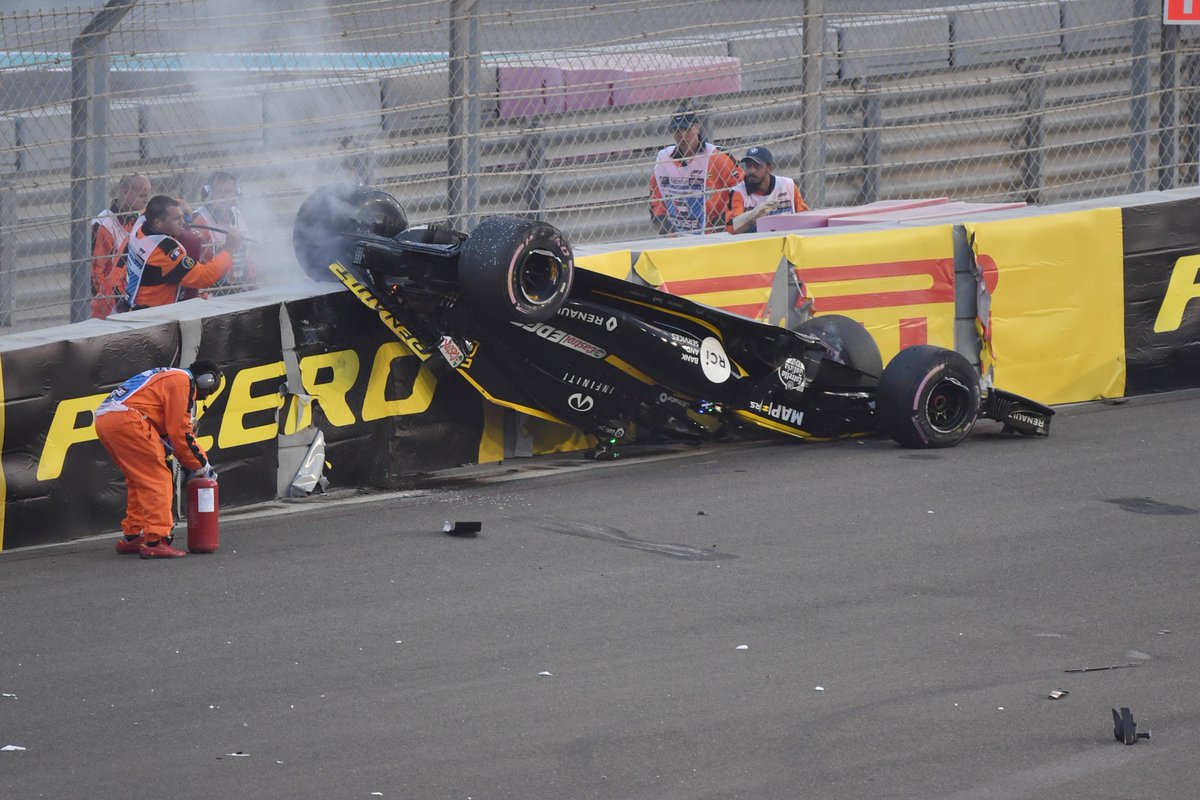 Hamilton, Bottas, Vettel, Raikkonen, Leclerc and Ricciardo was the top 6 before the restart.

With Verstappen still struggling with power issues, he got involved in multiple battles against Ocon – and a very aggressive move at the hairpin from the Dutchman almost ended in tears.

Kimi Raikkonen’s final race with Ferrari came to an early end because of an electrical failure and stopped on the start-finish straight.

A VSC was deployed and race leader Lewis Hamilton pitted and put on supersofts. It dropped him to P5 behind the other big guns. Charles Leclerc and Romain Grosjean did the same and both of them rejoined outside the top 10.

Vettel, Bottas and Verstappen all pitted from laps 15-17 and they remained in the same order. Ricciardo took the lead but hadn’t stopped yet. Hamilton, Bottas, Vettel and Verstappen.

Sergio Perez passed team-mate Esteban Ocon to lead the midfield in the first half of the race. Sainz, Ericsson, Gasly and Alonso rounded out the top 10.

Marcus Ericsson’s race came to an end on lap 25 as the Sauber driver lost power while running in the points.

There was a great battle for 11th between Ocon, Vandoorne and Grosjean for the space of two laps. Grosjean managed to overtake the Belgian in the first DRS zone, but then the McLaren and Force India both passed the Haas in the second one.

Ocon got past Vandoorne on the next lap after some superb duelling through a series of corners. However, he ran wide at T17 after making the move and received a 5-second penalty for it.

Ricciardo finally pitted on lap 34 from the lead – and then the action really started to kick off.

A lock-up from Bottas at turn 5 left the door open for Vettel to overtake the Finn on the second DRS straight later on the lap. The nightmare continued for the Finnish driver when both Verstappen and Ricciardo passed him on laps 38 and 39.

Esteban Ocon joined the retirement list on lap 46 after an oil leak forced him to pit 10 laps before the end. Gasly, who had moved up to P10 thanks to Ocon’s issue, dropped out as well two laps later with a similar looking problem.

Hamilton stroked it home to collect his fourth win at the Yas Marina circuit. Vettel and Verstappen completed the podium places.