As track conditions improved, so did the times, with yesterday's winner Envision Virgin Racing's Sam Bird narrowly missing out on Super Pole despite dealing with the handicap of starting in Group 1. The Brit will start the second race in Diriyah in seventh, ahead of Rokit Venturi Racing's Edoardo Mortara and BMW i Andretti Motorsport's Max Guenther.

Hot on the heels of Guenther will be TAG Heuer Porsche's Andre Lotterer, who finished second in yesterday's season opener. The German driver starts one place in front of his former DS Techeetah teammate and reigning champion Jean-Eric Vergne in 10th.  Following his retirement yesterday, Vergne had the advantage of starting in the last Qualifying Group, claiming that even a 10th place start would feel like a Pole position for the Frenchman after a dismal start to the season.

Behind Vergne is Mercedes-Benz EQ's Stoffel Vandoorne, fresh off the back of a third-place finish in yesterday's race. The Beligan driver starts ahead of Envision's Robin Frijns, Mahindra Racing's Pascal Wehrein and Audi Sport Abt Schaeffler's Daniel Abt.

In the middle of the grid will be Rokit Venturi Racing's Felipe Massa, who starts ahead of Nissan e.dams' Oliver Rowland and fellow Brit Oliver Turvey (NIO 333). Turvey is followed by Neel Jani for Porsche, while rookie Brendon Hartley rounds off the top 20 for Geox Dragon. 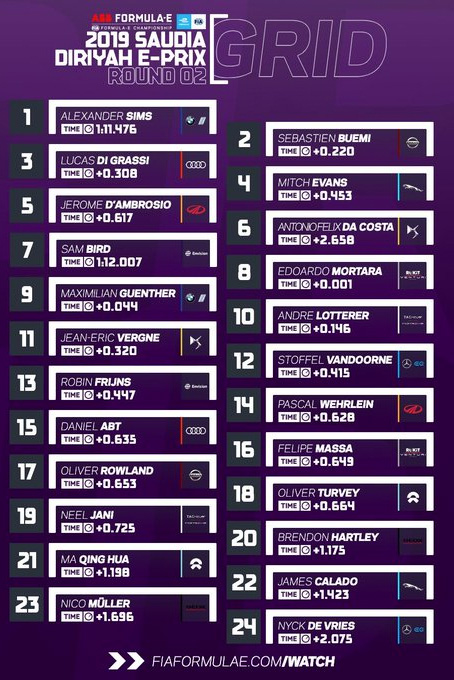 Formula E | De Vries: "we still have work to do but it looks like positive"