Long before they started duelling for race victories and championships in Formula One, Michael Schumacher and Mika Hakkinen's first big battle came at the Macau Grand Prix back in 1990. The Finn looked set to win the event – he dominated qualifying and won leg 1 (Race 1) by 2.66s from his German rival.

However, the drama would unfold in Race 2. In the closing stages of the second event, the Finnish driver was right behind his German rival and he could afford to stay there following his comfortable victory in the opening leg – but disaster would strike as Mika tried to make a move for the lead.

Hakkinen takes up the story from here [Quotes from an F1 Racing Magazine interview in 2012]: “At the start of the second-last lap, we were coming past the start/finish line and Michael missed the apex of the very next right-hander. With the speed and the sort of power we had in F3, a mistake like that means you slow down in a big way. I knew I had to overtake him.”

I started to [overtake] – and he moved across at the same time… I remember thinking, ‘I don’t believe this’.''

The pair clashed, Schumacher rear wing was broken but carried on to win the race, while Hakkinen hit the wall and retired from the race. The Finnish star threw his gloves to the ground and was absolutely devastated.

''The team wasn’t very happy. They lost a lot of money because the prize money was big. For me, it was a massive learning curve.

So, looking back today, who does Hakkinen blame for the clash?

“Myself. Afterwards, you think, ‘Racing is racing and it’s always tough’. But when you… don’t know somebody is moving so quickly behind you, and you move across – well, you don’t have to think twice about what’s going to happen. But, as I say, this is motor racing; no point being negative.”

Schumacher briefly spoke about it in an interview with MacaoMagazine.Net a few years ago: “It was quite a while [ago] now, but I remember it to be an extremely difficult race, especially as I had to drive the last lap without a rear wing. We weren’t expecting to win this race, as Mika had the superior car, but when we did, we all felt we were experiencing a highlight of our careers.”

For a long time, it looked there would be no battles between this pair for victories and championships. Both men made their debuts in the sport in 1991 and from 1992-1997 it was pretty much all one-way traffic. Michael Schumacher had won 27 races and two drivers' championships prior to Hakkinen finally getting a win on the board at that controversial race at Jerez in the last race of the 1997 season.

Following on from the Finn's first win at the end of '97, the next three years would turn into a classic showdown between Hakkinen and Schumacher – and it became a clash of the titans. 8 years on from Macau, they would go head-to-head for the 1998 and 2000 championships. Let's take a look at some of the amazing tussles they had over that period of time.

The 1998 Luxembourg Grand Prix was held at the Nurburgring in Germany and it was penultimate round of the season. Heading into the event Hakkinen and Schumacher were tied on points following a season of swinging momentum. The Finn led his German rival by 22 points after Monaco – but five wins in eight races for Michael and some unreliability for Mika saw them deadlocked heading into this race.

It looked like Schumacher was in prime position to take the lead heading to Japan as he took pole and was joined on the front row by team-mate Eddie Irvine. The race looked like it would be a Sunday stroll for the German legend as he rapidly pulled away from Irvine and Hakkinen in the opening stages. Yet, things would change almost as quickly.

Hakkinen, who struggled in the first 10 laps, caught and passed Irvine on lap 14. At this stage, Schumi led his Finnish nemesis by 8.5s. Mika would go on the rampage and set a series of fastest laps to close the gap to the Ferrari out front. The German pitted on lap 24 – but Mika in the McLaren went four laps longer and rejoined in front to stun the partisan support and the Ferrari team.

From there on Hakkinen showed nerves of steel to fend off the challenge of Schumacher to take a vital victory on German soil. It was the biggest moment of his career to that date and delivered a magnificent performance under huge pressure. He would go on and win the championship in Japan.

This turned into another great fight at the Nurburgring once more. Hakkinen had a stunning launch off the line to take the lead from P3 on the grid. Schumacher hustled and harried Hakkinen in the opening phase of the Grand Prix. Both drivers were on the absolute limit in drizzly conditions on dry tyres – but eventually, Michael made his move to take the lead on lap 11. Despite that, Hakkinen didn't give up and kept Schumacher honest for the whole race as they left the rest of the field in their wake. In atrocious conditions, the Ferrari man won by 13 seconds from his Finnish opponent. Schumacher lapped the whole field apart from Mika – and Hakkinen almost did as well on a day they embarrassed the rest of the grid.

These two legends had many great battles over the years – but this one at Spa in 2000 was the greatest of them all. The Finn, who went into the weekend two points ahead of Schumi, took pole position with his German rival down in 4th. It was to be Mika's final pole position in F1 too.

Then we had a classic head-to-head between the pair on race day. It was a wet start after rain before the Grand Prix had left the track pretty soaked. Following a safety car start, the Flying Finn pulled a gap as Schumacher quickly dispensed of Trulli and Button. All drivers soon switched to dries – but with the kerbs still wet, Hakkinen dropped it at Stavelot to lose the lead to his chief rival in the Ferrari.

Nonetheless, the two-time world champion in the McLaren didn't give up. After everyone made their second stops, the Finn was flying. He reeled in Schumacher and got the move done in breathtaking fashion by jinxing to the inside of Zonta as Michael went for the outside in an incredibly brave move before La Source. It was one of the all-time great overtakes in the history of the sport and he did it with only four laps remaining. Mika would go on to win the race and take a marvellous victory. 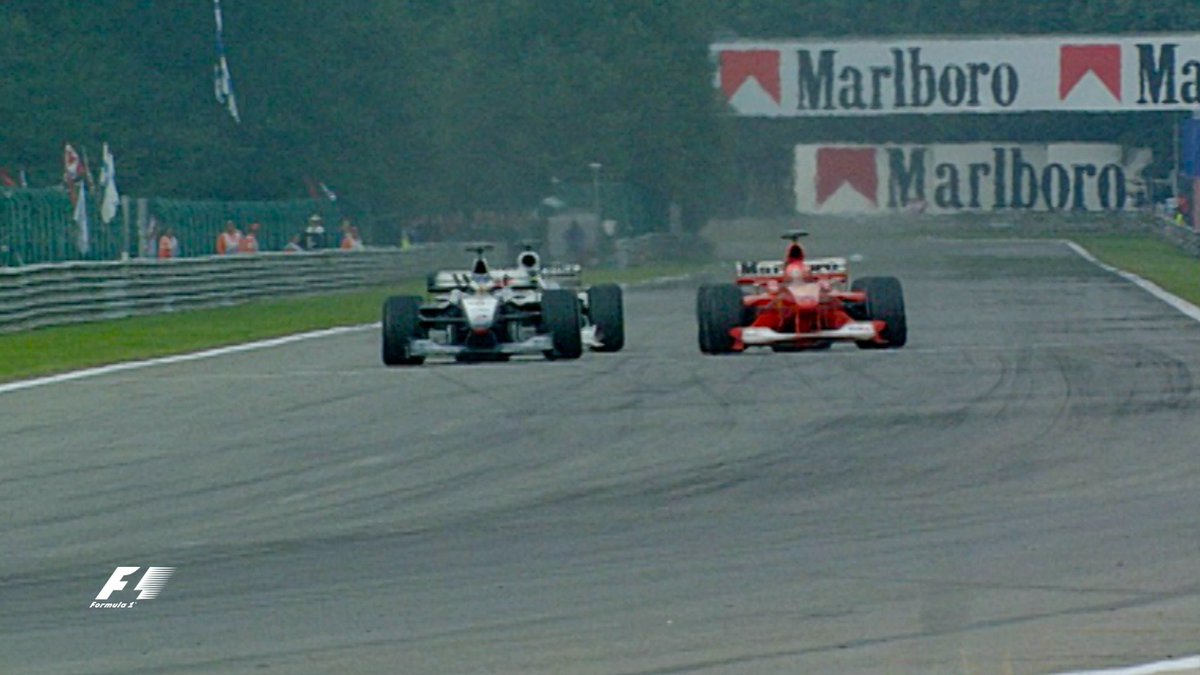 The championship had firmly swung the German's way following the race at Spa. He won at Monza and Indy to take an 8-point lead with him over the Finnish driver to Suzuka. If he won the race he would become world champion for the third time.

The qualifying session for this race was potentially the greatest ever. Schumacher and Hakkinen traded blow for blow throughout the hour – but the Ferrari came out on top with a late lap to take pole position by 0.009s. We were set for another Suzuka showdown between these two double world champions.

Once again, Hakkinen got the better start and took the lead into turn one. It looked like in the first half of the race that the Finn would take the title battle to the wire at Sepang in Malaysia. Yet, that wasn't to be the case. The McLaren man had pulled out a lead of almost four seconds – but some small drizzle as the Grand Prix went on played into Schumacher's hands. He closed in before the second round of stops and jumped his Finnish nemesis by staying out longer. Hakkinen never gave up and chased until the end – but the German would prevail. Schumacher took the win, his third championship and his first with the famous Italian team. Just 1.8s separated them after 53 laps as both of them finished over a minute ahead of 3rd placed David Coulthard. It would be the last battle for a championship between two legends of Formula One. 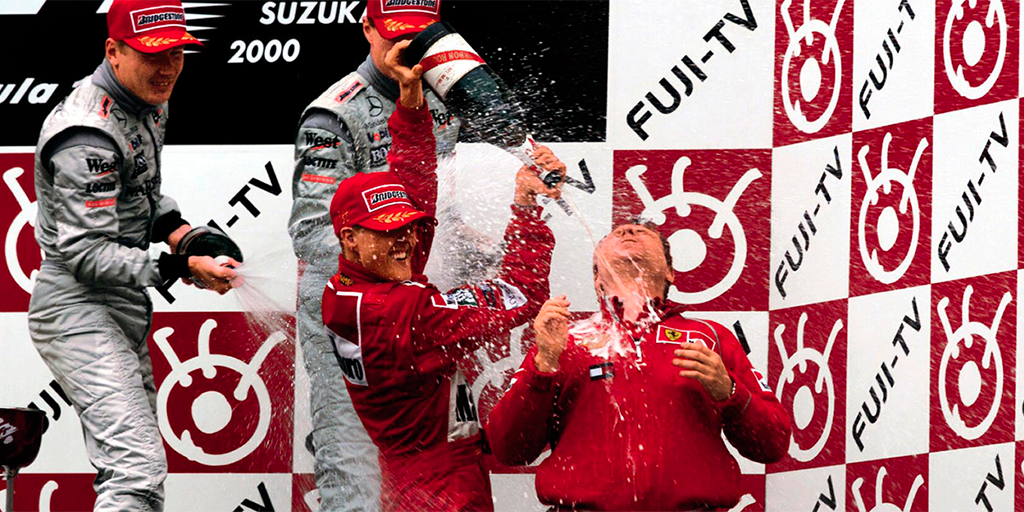 Why was this rivalry so special?

There was huge admiration between the pair. Schumacher never seemed too bothered about rivals or what other drivers thought of him – but Mika Hakkinen was very much an exception. We all saw that when he carefully listened to Mika after the 2000 Belgian Grand Prix because the Finnish driver wasn't pleased with one of his defensive moves. The German allegedly told friends that the Finn was the only rival that he respected and feared.

They both brought the best out of each other over the course of the three seasons as Hakkinen finally had a race winning car under his belt after some very tough years at Lotus and in his first few years at McLaren too. When Schumacher broke his leg at Silverstone in '99, Mika's form dropped markedly. We saw so many qualifying sessions and races in that period of time where they traded pole positions multiple times in qualifying sessions and going hard at it in a lot of races too. It was epic to witness.

Even when his Finnish challenger dropped off the pace for a few races in 2000, the German maestro always believed Mika was his main rival despite David Coulthard having more points – and he would turn out to be bang on the money as the Flying Finn pushed him all the way towards the end of the 2000 season.

The difference between this clash of the titans and most other sports rivalries was the mutual respect they had for each other. Following the 2000 Italian Grand Prix, Schumacher broke down in tears in the press conference after equaling Senna's number of race victories – and Mika put an arm around him to console him. A touching moment in the heat of a fierce championship battle. Mika's final win came at the 2001 United States Grand Prix and Michael genuinely seemed pleased for him when the race ended and they shared some laughs in the press conference.

It will go down as one of F1's greatest rivalries in the long history of this sport. This rivalry was full of respect, but also with a lot of hard and clean racing. 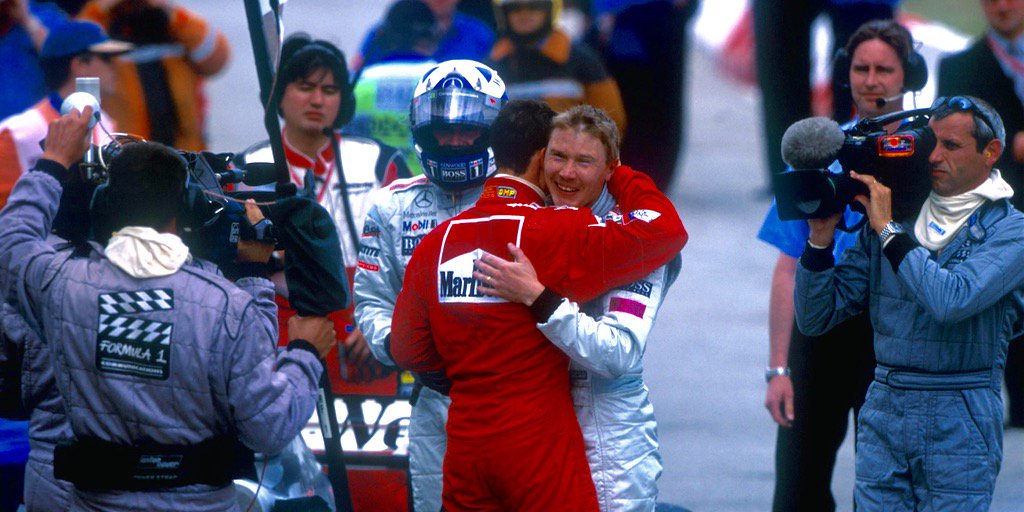