Since coming on to the calendar in 2009, three Drivers’ Championships have been decided at this venue.

2010 – Vettel snatches it from Alonso

Heading into the final round of an incredible season, Fernando Alonso had an 8-point buffer over Mark Webber and led Sebastian Vettel by 15 points.

After qualifying P3, things looked really good for the Spaniard to claim the championship. However, it all changed on race day.

A nasty incident on the opening lap involving Michael Schumacher and Vitantonio Liuzzi triggered a safety car period. As it would turn out, Nico Rosberg and Vitaly Petrov boxing and changing tyres played a massive role in the outcome of the race and championship.

Vettel, Hamilton, Button, Alonso and Webber was the order before they started making stops.

Webber pitted at the end of lap 11 as he started to struggle with his tyres. Ferrari decided to respond to that with Alonso four laps later. The Spaniard remained in front of Webber – but the two of them found themselves behind Rosberg and Petrov.

At the front, the tyres started to come back towards Vettel, Hamilton and Button and they stayed on track. It meant they could create the gap they needed to come out in front of that group by a comfortable margin.

Try as he might, Alonso couldn’t find a way past Petrov and ended up finishing P7. With Vettel taking a superb victory, the German stole the championship by 4 points from his Spanish rival. The Vettel era well and truly began. 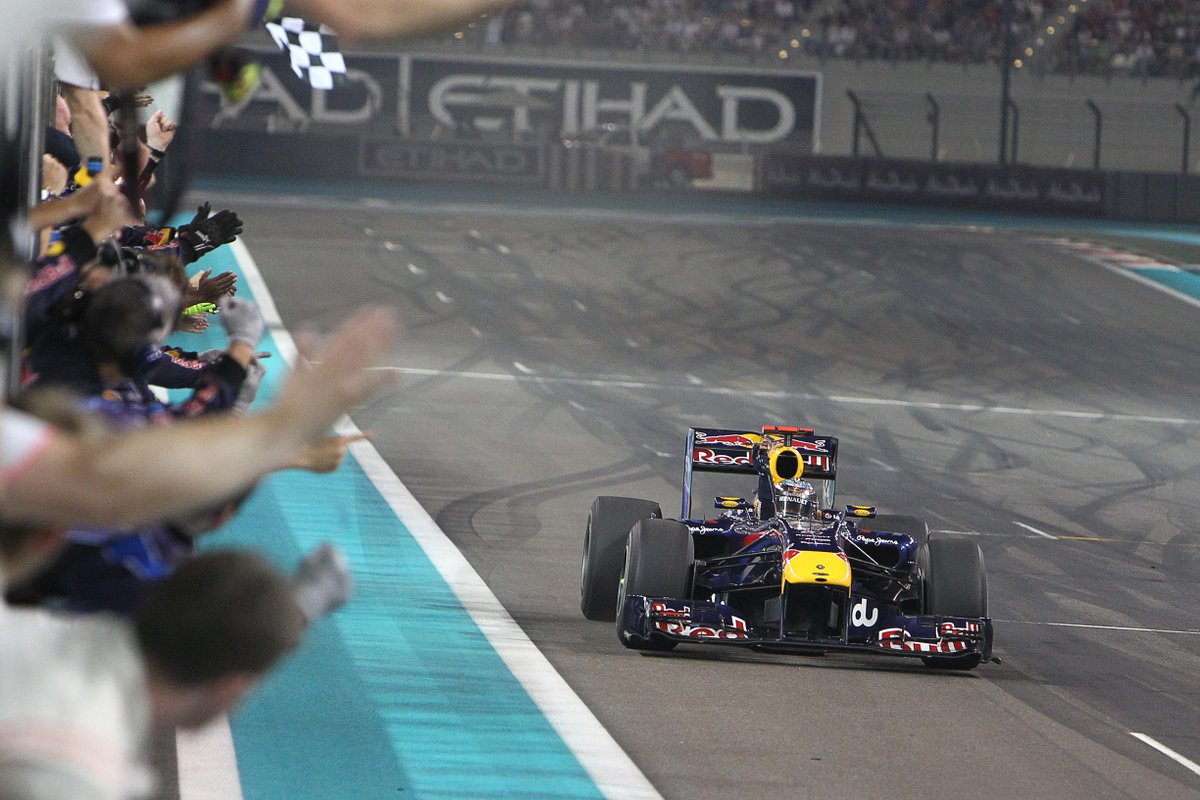 In a period totally dominated by Mercedes, two of the three title fights between the Brit and the German went to the final round at the Yas Marina track.

2014 saw Lewis Hamilton claim his second World Championship after a huge fight against his stablemate.

17 points covered the pair before the race began and with double points on offer, Rosberg needed to win and Hamilton to finish 3rd or lower to pip the Brit to the title. He comfortably took pole to give himself that chance.

Yet, Hamilton got the better start and took the lead into T1. From there on in, it was plain sailing for the British star as he controlled the race. Things became even easier when Rosberg’s ERS failed just before the halfway point of the race.

Hamilton eased to the win and claimed the championship in the process. Rosberg managed to see the chequered flag but finished P14.

Following that heartbreaking defeat, Nico Rosberg bounced back and took his one and only championship at the same event in 2016.

Unlike in 2014, this was very tense until the bitter end. Hamilton and Rosberg locked out the front row and it stayed that way. Max Verstappen spun on the opening lap but he would play a role in the nail-biting finale later on in the Grand Prix.

With the other drivers from the big six pitting from laps 7-9, Verstappen found himself back up in 2nd thanks to staying out – and the Dutch youngster ended up between the Mercedes’ of Hamilton and Rosberg.

Rosberg started to catch him slowly and the German made a brave lunge on lap 20 into turn 8. Max held on initially, but Nico got him heading down the second long straight.

After the second round of stops, Hamilton slowed the pace down and tried to back Rosberg into the Red Bulls and Sebastian Vettel. The Brit needed Rosberg to be 4th to grab the championship from the German’s hands.

Despite a pulsating end as Vettel and Verstappen got close to Rosberg, neither driver could make a move and Nico’s 2nd place finish secured him the title by a mere 5 points. It was a dramatic end to a season full of tension between the two Mercedes drivers. 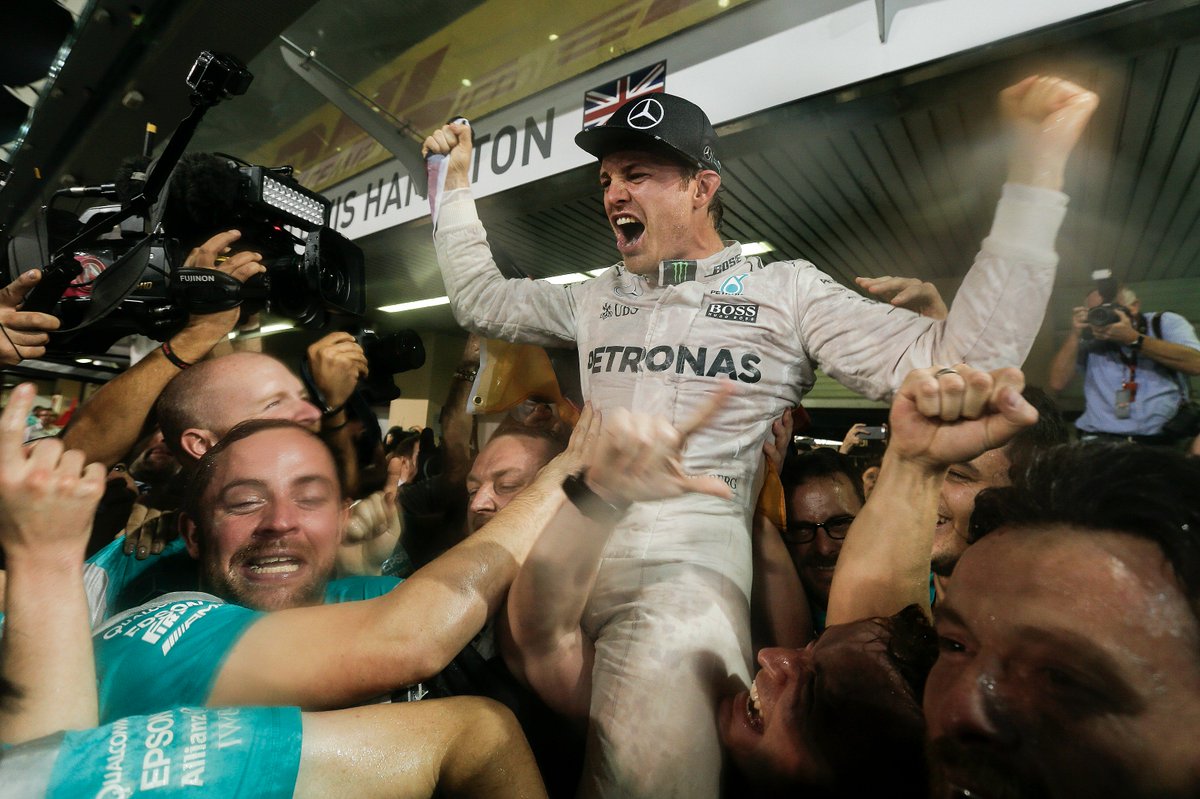 Leaving aside the title deciders, there has been some really dull races at Abu Dhabi in recent years. 2012 was most definitely an exception as Kimi Raikkonen took his first win following his return to the sport.

The drama started in qualifying as Sebastian Vettel was thrown to the back of the grid due to his car not having enough fuel in it. This gave Fernando Alonso an opportunity to close the gap in the standings.

Lewis Hamilton led away from pole from Raikkonen with Alonso in P4 and Vettel well outside the points after lap one.

Vettel damaged his front wing on the next lap when he made contact with the Williams of Bruno Senna. He then hit the DRS sign trying to avoid Ricciardo while warming up his tyres during the Safety Car period and it forced him to pit and he dropped to the rear of the field again.

Things really started to go Alonso’s way at this point. He overtook Maldonado for P2 just a couple of laps after Hamilton retired from the lead. Raikkonen now led from Alonso as Vettel tried to come back through the field.

Following the stops for all the drivers, Raikkonen was P1 in front of Vettel, Alonso and Button. Vettel put on an overtaking show to find himself in the podium positions, but he needed to stop again due to tyre wear and did so on lap 37. He rejoined in P4 – but a long way adrift of the top three.

On the next lap, there would be another safety car period happened thanks to a tangle between Perez, Grosjean and Webber. The Frenchman and Australian were both out on the spot after sustaining too much damage.

This allowed Vettel to close right up to the back of Button, Alonso and Raikkonen – and it looked like he could win the race.

However, when the race resumed, he struggled to pass Button and the top two got away. Eventually, Vettel made a sensational move on Button at the end of the second straight to take the podium spot and claim P3.

Nonetheless, the star of this race was Raikkonen. He had some luck with Hamilton’s retirement, but he beautifully controlled the race and held off the late charge of Alonso to take his 19th Grand Prix victory and his first after a two-year break from F1.

It was a classic race in an amazing season of Formula One. 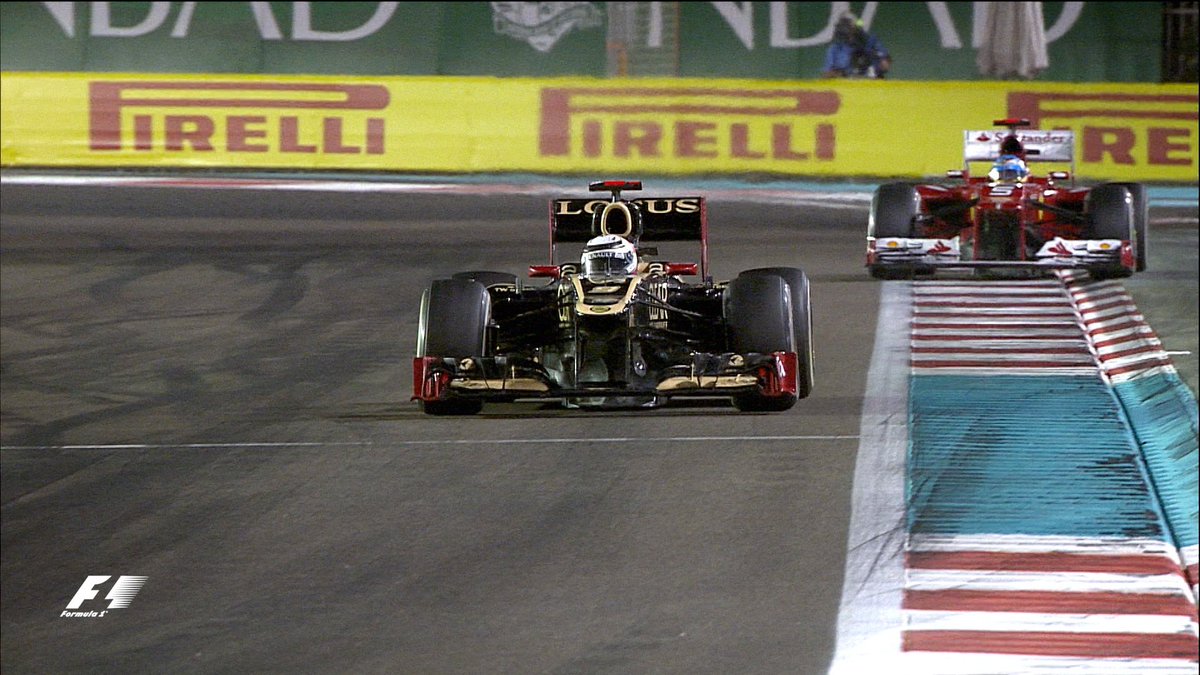